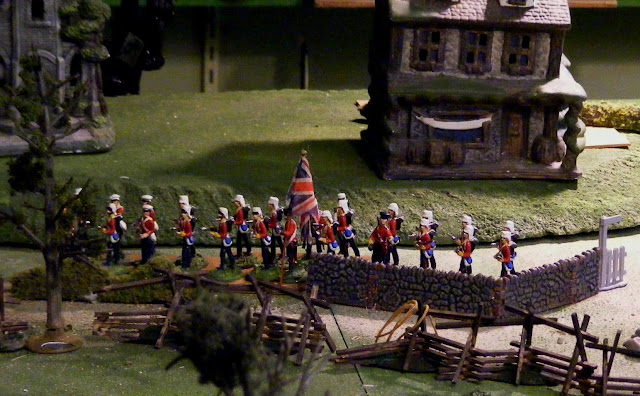 The 31st Foot prepares for action as yet another test game begins.
HUZZAH !   The tropical weather has gone, Hurricane Earl  failed his morale, broke up and blew by with only a few ripples and life is slowly getting back to normal. Normal of course means frigging with rules, unit sizes and basing. This is not a new pastime for me but the last 5 years have been particularly intense as I try to sort out exactly what my 1812 to 1850's 40mm armies should look like and what sort of games they should be organized for. In particular what I felt ought to be best and what seemed to work best in practice have seemed at odds and taken quite a bit of balancing and investigating. Various "clever" ideas have also complicated things and I have been up and back various roads, some several times, more old school, more new school, more skirmishy, more tactical, more battle-y, more abstract.  But at last various trends seem to be well defined and I have what I think is the right sort of organization and the right set of rules.

There are strong echoes of With MacDuff to the Frontier and the structure behind Morschauser Meets MacDuff can still be traced but they also hearken back to my old Horse & Musket rules form the '80's. I've also spent a fair amount of time with several Don Featherstone books this summer and the philosophy if not many particulars have had their influence renewed. Lawford & Young's influence is inescapable and I came close to just adopting Charge! for this project. Last but not least I have also been re-reading my 35+ year old copy of Little Wars.

Time and space have also had their influence, one can only fit so many 40mm troops on a 6x8 table and still have room to maneuver. I have a sentimental attachment to Charge! style units with 3 or 4 largish companies but in practice, the individual companies tend to confuse players if also given multiple regiments and require that they build their units to my specifications.  (and I expect most potential players to be unfamiliar with both troops and terrain and to have their own  preferred organization). Some measuring and experimentation has also confirmed that a unit foot print of between 8 and 12 inches is ideal for playing  Table Top Teasers as well as historical War of 1812 actions. 5x4 man Morschauser regiments also have a very strong emotional pull but while I have retained 4 as the basic group for combat, unlike the original, 1 such group is too small to be practical with what I had in mind. So, at last, after severe trials of 2 alternatives, I have bowed to the inevitable and adopted the 3 x 8 organization that has served me well in my 1812 US organization. The 8's have no significance other than each will get their own movement tray but also each "company" of 8 will get an officer and an nco. Cavalry and light infantry will be formed 12 strong. Artillery will be 2 guns with 6 or 8 gunners.

The next post will include a brief look at today's test game and a few comments on the rules and why they are as they are.

For those interested in a copy, they can be had from google docs here. Or drop me an email and I'll send you one. Its not quite a final edition, even if I don't find any more loopholes, conflicts and ommissions or get any irrisistable bright ideas, as I want to add some examples of play, diagrams, sample orders of battle and so forth.
Posted by Ross Mac rmacfa@gmail.com