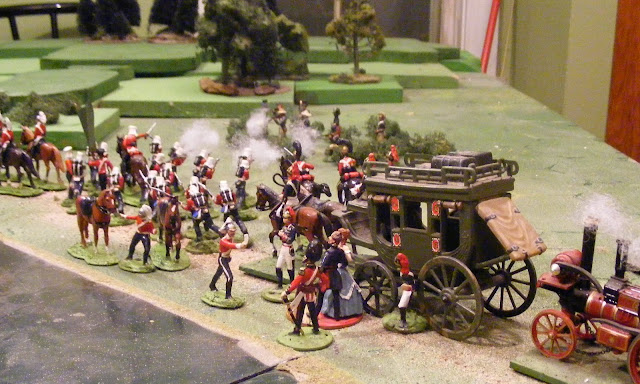 We have already seen the first 8 Princess Charlotte Heavy Horse appear. Well, I had actually pledged myself to cast, assemble and paint up 12 cavalry, so I cast 4 more and put them together. I was on the verge of declaring a general upgrade to 24 man infantry units and 12 man light infantry or cavalry, but I decided to look at my existing units. 3 of my existing units were raised to a 24 man standard, the rest were down to either Charge! or Morschauser standards or 9-10 cavalry or 18-20 Infantry (discounting drummers).  Between upgrading existing  units and finishing incomplete ones, I was looking at doing nearly 100 men and horses before I could touch any new units. Given the marginal difference, I decided to settle on the Morschauser  10 or 20, if that proves unsatisfactory, I can always expand at some point in future but soon I should be able to start on the natives armies from the North.

So what about the 11th & 12th cavalry castings? After some brief experiments with a spare bearskin head and some putty, I decided that the Royal Horse Guards wore a brass helmet with bearskin crest. Two of them can be seen on the far side of the coach in the picture above.

In addition to having added 1 and 1/5 cavalry regiments, I have switched the coats on the FTC Bodyguard and added a mounted corporal to bring them up to strength, added an infantry Brigadier, 4 artillery crew with 4 more 1/2 done, and have added colours to 2 of the infantry regiments. These poor lads have been waiting 5 years for a flag, the question is which flag or flags? Two British colours? or 1 Faraway colour? Since I have gotten settled back into fictional mode and enjoying it more and more, I decided on new colours. These will seen more clearly on the next day or so as I finally get a game in, one  of the original table Top Teasers.