Going Around the Flank.

It sure gets easy to get blinkers on and butt your head against a problem. When you see a way to out flank it, sometimes seems bloody obvious in hindsight. In truth there is usually cost and risk associated. 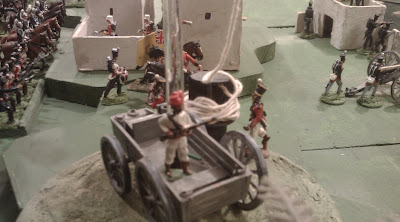 To quickly summarize this 1 1/2 year old problem, after changes to our household that resulted in additional bookshelves, desks etc moving into my wargames room, I felt over crowded and decided to reduce the size of the table. After much deliberation I cut it down from 8'x6' to 6'x5'. This eased congestion somewhat without completely  resolving it and in the meantime I began playing a lot more smaller gamers (for example Bob Cordery's Portable Wargame) which led me to ponder how big a table I needed on a daily basis and whether or not I should have a larger table that could be set up when needed and packed away leaving a small table the rest of the time.

The other day Bluebear Jeff left a comment about smaller table meaning less maneuver room. I had just been playing on a friend's 4'x6' table (click here to see pictures of the WWII game) where due to the small figures and reasonably sized forces used in the 2 different games, there was plenty of room, so the thought came quickly, "Not necessarily". After all I can also remember playing on some large tables crammed with over 1,000 miniatures and no room to go anywhere but straight ahead. However, the question also got my mind thinking about a rejected option.

While I plan on expanding my 1/72nd plastic forces as one way to expand my table,  I don't want to abandon my 40mm Toy Soldiers altogether.   I had been willing to contemplate converting them for use on a small gridded board, why not smaller conventional units? 25 years ago, my standard unit had been 12 15mm figures. This grew to 30+ 54mm figures then gradually dropped back to 20 x 40 mm figures. I recently compressed this slightly to 16 figures. 16 is already pretty abstract for a battalion, why not go back to 12? Small enough to fit a 4" grid should I choose to use it, small enough that several 3 battalion brigades can be fielded, even on a 5x6 table. In practice, the smaller the unit footprint and the shorter the weapon ranges, the more room for maneuver.

Meanwhile, I had taken my table apart earlier this year, cut it down and turned it, but hadn't actually reassembled it permanently. It took a few minutes to clear it off and set up just 1/2 to see how it felt. This gave me a 3x5 area, ample for small 1/72nd scale ancient games using 15mm bases and ranges or for DBA/HOTT or a Portable Wargame but any full sized 40mm game was going to need the larger table. It was also a good reminder of how much storage I have under the existing table. I made the necessary cuts and reassembled it but also found a way to lower it 2". Doesn't sound like much but my tripod will now be tall enough  to peek over the top and the table is just sufficiently lower that my desk chair will allow me to sit comfortably at it.     .
This will allow me to remove a bar stool that is now too high to use and which is one of the obstacles that I have to negotiate to get around the table ( Luckily the owner of the chair now appears to have room for it at his table).  A little more study, and I have identified a better layout for my painting desk, the current position which it has occupied for a few months has proved awkward and so far attempts to fix the layout have been only partially successful. This in turn should allow more obstacles to be removed. I have high hopes for the new plan.

To celebrate the return of a non-wobbly table and to test out the new theory, I have returned to Stuart Asquith and CS Grant 's Scenarios for All Ages and Scenario 2. Threat to the Flank. I have also returned with a sigh of relief to a fictional setting and glossy toy soldiers. The hitherto unexplored southern half of Neuland is about to become a battlefield. Blue has deployed 8 battalions of infantry, 2 batteries of artillery,  cavalry regiments and a field hospital to attack Red's 6 battalions, 2 batteries, 3 regiments  and an observation balloon.. 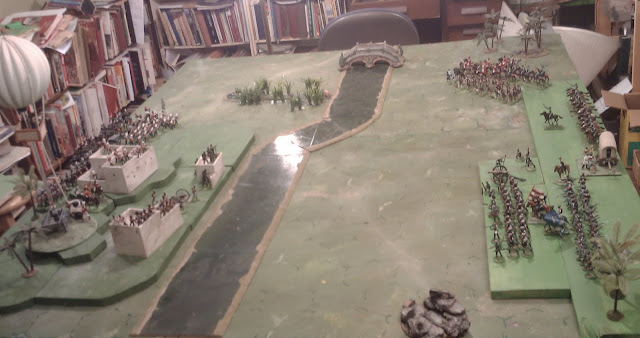