It is common to see references to Oberhilse as a Republic throughout the 19th Century. In part this is because we are used to thinking of Oberhilse after the 1849 constitution but mostly it is because so many of the accounts originated from visitors to Faraway where they absorbed the local view that any state that wasn't a monarchy, must, by default, be a republic. Oligarchy is probably a better description of Oberhilse Free State in 1841. Technically, the Council of Elders which ruled Oberhilse was elected by all citizens, which is to say, male land owners either descended from the original settlers or granted citizen ship. Since, by the 1830's  Outlanders, those not holding citizenship despite owning land and paying taxes,  constituted over 75% of the population, in fact the government was in the hands of a small number of "Old Families",

Oberhilse Volunteers: (Left to right) Peipur Tigers, San Carlos Grenadiers, Frontier Light Horse in short jacket and hunting short, local volunteer and Bangor Rifles.
In theory, the defence of Oberhilse rested on an armed populace. One citizen in 5 was obliged to maintain arms in good order and know how to use them. Since the militia laws also didn't apply to Outlanders, this system had become obsolete by the 1830's. In its place was a system not so different from neighboring Faraway. There were three components:

1. The Council Guard (later the Republican Guard and often referred to that way). This was much smaller than in Faraway and consisted of a troop of largely ceremonial Horse Guards, a battalion of Grenadiers of the Council and the Guard Jaegers. These were all drawn from the ranks of the Militia, it being seen as the duty of all the Old Families to contribute as least 1 son for a 3 year stint in the Jaegers. Outlanders were not eligible to serve in the Guard prior to 1849. The Jaegers, better known as the Blue Guard were the only component of the guard to see frequent field service..

2. The Volunteers. To fill the deficiencies, volunteer regiments were raised when needed. Most of these were raised primarily from Outlanders at the start of a campaign and the expense was born by the government. Some however, were true volunteer units, amateur soldiers who assembled and trained in peacetime at their own expense while other short term regiments were raised and paid for by wealthy citizens as a patriotic gesture, (especially if seeking a seat on the Council). Occasionally  units were recruited overseas with many of the soldiers tending to settle and become Outlanders when the regiment was disbanded.  Faraway tended to regard these as mercenaries rather than volunteers. Similarly, the regiments raised in Hougal or San Carlos technically served Oberhilse as Volunteers rather than as allies.

3. The Oberhilse Field Force (O.F.F.). Legally, this was just another volunteer formation but since it was kept in arms from 1836 until the establishment of the Republican Army in 1849, it was a regular standing army in all but name. The O.F.F.  consisted of 2 regiments of Dragoons, 6 regiments of infantry, and 2 batteries of artillery as well as a small technical staff.

Uniforms.
While there were no national uniform regulations prior to 1849, blue coats had been traditional for all arms since the mid 18th century and the cut of uniforms  tended to follow international fashion. Due to close commercial and social ties and heavy immigration, American influence is often evident. 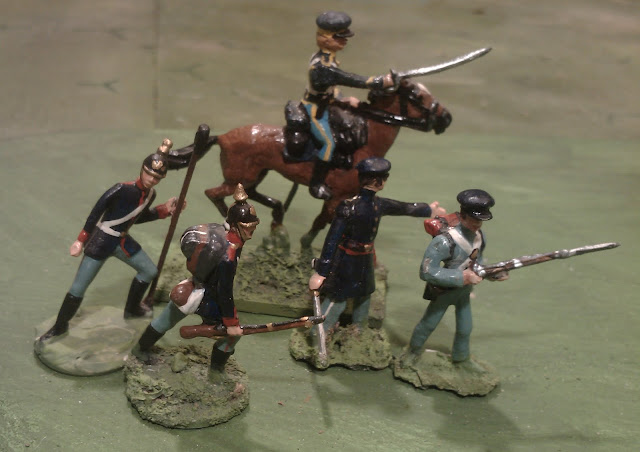 Oberhilse Regulars: (left to right) OFF Artillery, Guard Jaeger (Blue Guard), Dragoon, Infantry Officer and private.
1. The Blue Guard. Battle prints and Toy Soldiers depicting the Guard Jaeger almost inevitably portray the famous 1849 uniform regardless of what era is supposedly being depicted.  Since their inception, the Jaeger have worn a leather helmet but prior to 1849 it was not the helmet of Prussian design, worn with either plume or spike but rather one based on American Revolution Light Infantry Caps. With an eye towards economy, the horsehair crest was changed in 1831 to allow it to be removed. The difference between this cap with its small brass comb and the later spiked helmet is of great interest to uniform enthusiasts but of no interest to the general public. Likewise the double breasted, thigh length frock coat is quite different than the shorter single breasted 1849 tunic but again the distinct is minor and the more familiar later uniform is what the public expects. Cynics might also suggest that the market being small, repainting Prussian Toy Soldiers in Oberhilse colours makes more business sense than commissioning a more accurate model that the public isn't familiar with.

2. The Volunteers. Considering how many units have been raised only to be disbanded  within a year or two, all uniformed at the whim of the Colonel, or of the volunteers themselves, it is not really possible to lay down firm guidelines for how units looked. Some of the more famous units include the red coated Peipur Tigers in their Tarleton helmets, the Bangor Rifles in Grey fatigue uniforms and the Frontier Light Horse in round or slouch hats and either short jackets or deer skin hunting shirts. The uniforms of the Grenadiers of San Carlos are typical of that widely worn in the 1820's, a shako, blue coat and white pants, though in their case, they hung onto to it until the 1850's.

3. The Oberhilse Field Force. (OFF) Officially all ranks were issued both a full dress uniform consisting of a shako, dark blue coatee and light blue trousers as well as a fatigue uniform consisting of a soft dark blue peaked cap and a short shell jacket, light blue for infantry and artillery, dark blue for cavalry.  The evidence suggests that dress uniforms were never issued and were only seen at social events, being worn by officers who provided their own. Officers frequently also provided their own dark blue frock coats as an alternative to the shell jacket. Once again, it is not hard to find illustrations and toy soldiers  showing the OFF Artillery in 1849 full dress but purporting to represent them in earlier wars..