Organizing an Army Part 2: The World Turned Upside Down

Since I'm not starting from scratch, I need to decide how what I have in the way of  glossy 40mm 19thC toy soldiers fits into an already existing if fuzzy  fictional setting. Apart from 1 unit of Alamo era Mexicans, most of the units are dressed for either the War of 1812 (I'm including the pirates and non-uniformed militia here), the Mexican-American War and India in the 1830's, some units in cold weather gear and shakos, fit for Afghanistan, the rest in hot weather gear for a march on Gwalior, Scinde or the Sikhs.

Interestingly, the contemporary Sikh and the Mexican-American wars both seem like almost ideal historical wargame campaigns with smaller, efficient "European" armies  marching into a hostile environment  (hostile in the sense of supply and movement being difficult as well as politically) to beat larger but less efficient armies with a core of troops fighting in European manner supported by irregular light cavalry operating against supply lines.   Both have one key problem, despite the numbers and some close calls, the odds are heavily stacked against the historical losers and one needs to make major alternate history changes to the upper echelons of the command in both armies to get them in with a chance.  Well, that's one of the things that wargaming is about right?

There are a couple of other little niggly problems which constrain me from doing either as historical projects. For starters, I don't care much for the 1848 Mexican uniforms  or the newest interpretation of the Sikh uniforms  with that odd little mini-turban. Then there is the problem that the Sikh Wars were fought between 2 armies dressed primarily in Red while the other was fought between 2 armies in Blue. WHAT were they THINKING?  Well, that's one of the things that Fictional Worlds were invented for.

None of this really helps, what I need is to know a bit more about my fictional island. When I first drew the map, I had very little information. I knew Faraway was on the West Coast and Oberhilse was on the East Coast, that  there were mountains in the North and that while the climate around the main settlements was  mild, further inland, winters could be harsh.  Since there were stories about Danish Viking settlements in Oberhilse I made the assumption that it was in the North Atlantic, probably quite far north since it obviously hadn't attracted major colonization efforts. When I later discovered that there was an ancient Native kingdom  on the other side of the mountains and that the climate there tended towards hot, I became confused. Eventually I decided that I must have been wrong and that the mountains were actually in the south, so I flipped the map and rewrote the labels.

Then I started wondering just where in the North Atlantic this island was that part of it was very warm but which had escaped heavy colonization except in a  few small pockets, and in particular how it had escaped significant Spanish attention since it was beginning to look like it must have been close to their longitude. I also wondered what other foreign influences might have played a role beyond the mountains. I picked up my globe and idly spun  it while I contemplated this conundrum. Suddenly the truth sank in, if I hadn't spent  my whole life in the Northern Hemisphere I might have picked up on it sooner. Neuland is in the Atlantic alright, but NOT the North Atlantic! It must lie quite far south, somewhere about 4,000 km East of the Falklands/Malvinas, not really on the way to anywhere else, especially if you control the Cape of Good Hope. 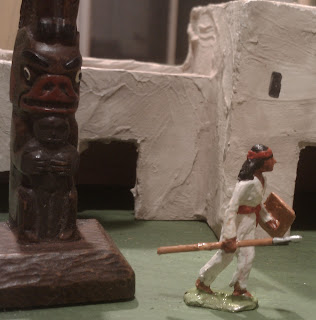 A Neverwaussi Spearman with typical square cane shield and throwing spear. About 1/3 of warriors usually carry trade flintlocks but the rest make do with spears, hatchets, warclubs and machetes. A few can still use the traditional slings but unless stealth is required, muskets are preferred.


So its time to turn the map around again so that the mountains and the warm air are indeed North of Faraway & Oberhilse. Then I need to find out more about the native kingdoms north of the mountains.  Right now all that I know are that the Neverwaussi are a riverine and coastal tribal people who fish and trade, that there is a different race that inhabits the eastern jungles, that there is an organized kingdom on the dry Western plains with a standing army  and that Arab slavers used to visit the North and East coasts. It seems that the Faraway Trading Company is on good terms with the various native rulers and supplies arms and training staff for their armies but that Oberhilse has been pushing colonies North of the mountains, a process recently sped up by the discovery of diamond mine in the North-Eastern mountains. Since Faraway and Oberhilse are already Trading Rivals and accustomed to fighting each other, their wars look likely to spill over into a new theater before long. 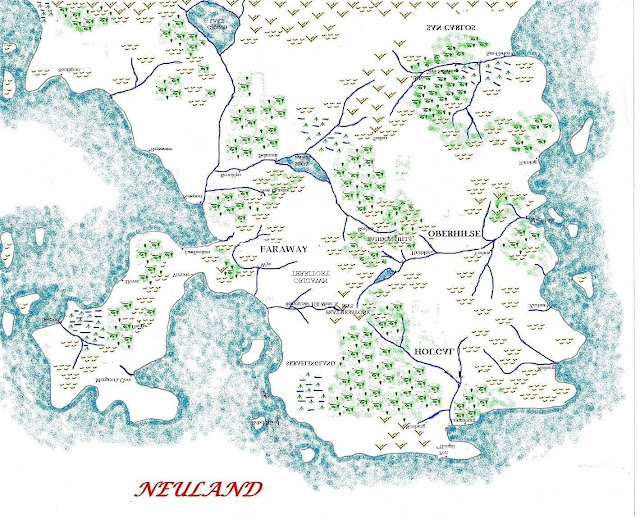 Could take awhile to get all the names fixed.....