After the test, before the report

Rather than asking the reporter from the Newport Noodle to comment on the plans and thoughts, I'd thought I'd slip in a brief post test post. 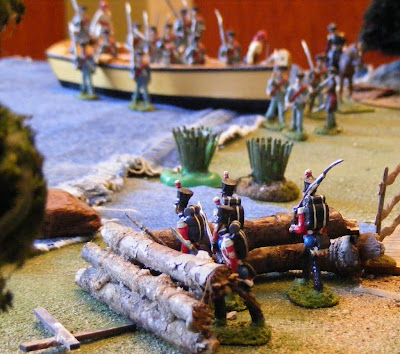 Another dawn, another invasion.
A detachment of Royal Scots Fusiliers stand to as the Americans Oberhilsians storm ashore.

Firstly, I was pleased. The rules had the right feel for this sort of game as I envisaged it. The game reminded me of early MacDuff games but in 2 hours instead of 4 and with a definite end. I'm sure there will be minor tweaks, for example I'm wondering if I should stick with the tried and false  but easy 45 degree arc of fire or restrict it to straight ahead but allow fire groups on the end of a line to wheel 45 degrees forward or backward before firing. I suspect that is pedantic and not worth the hassle but its tempting.

Secondly, I kept thinking of the forces as British and American. May have something to do with the uniforms....... I'm not sure this Imagination thing will stick or if I'll just go back to straight fantasy with two broadly historical armies fighting each other over imaginary terrain with imaginary orders of battle. No rash decisions on this though, I want to bring the armies up to speed as they are which will leave them able to go either way.

OK Battle report by bedtime. Slightly different terrain and twice the forces. Are those cavalry coming down the road? Is that red glare being made by a rocket?