Today brought something different. Today Rob Dean and I used a webcam and the speaker phone capabilities of Skype to play a miniatures game. I've been wanting to try it and afraid that it wouldn't work but I'm pleased to say that apart from having to push Rob's mini's around for him, it was much like having him in the room, I could even turn around and see him there, perched on top of a stool overlooking the table. Well, just his head and shoulders on my screen, a bit like Max Headroom now that I think about it........ 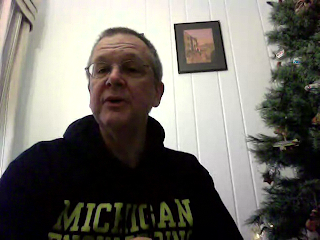 A screen save of my computer in Nova Scotia at one point in the game. 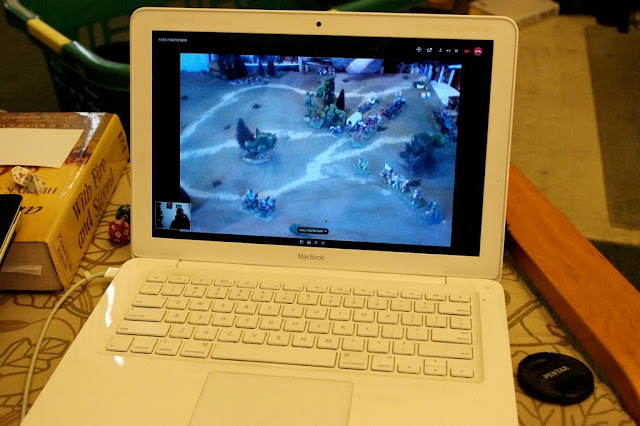 The view in Maryland.

The game was set in France during the early 16thC. The rules were Rough Wooing which we co-wrote and the scenario #32 from CS Grant's Scenarios for Wargamers: Convoy (1): Wagon Train. A tried and trusted scenario. The rules use a card activation system using an ordinary deck of playing cards. Since I was going to be pushing figures, I suggested that Rob flip the cards. Ideally the scenario calls for a GM to manage the arrival of the ambushers as a surprise to both sides. Rob's son Norman was hanging around in the back ground, painting Mongols or the like so I asked if he would do the rolls required and let us know each turn what was arriving. This turned out to be a game winning move on my part.

The game progressed with Rob letting me know which group to move, how far and in which direction. ("a bit more to the left" etc) Occasionally he would ask me to shift the camera angle or to measure a distance since it was hard to judge distance using a fuzzy 2d image. When dice needed to be rolled which each rolled our own and reported the results. (There is no point playing a game like this with some one you don't trust).

We spent about an hour discussing some rule changes that I had proposed (the rules will be uploaded to Google docs soon) and discussing the mechanics of the web game, then about 2 hours playing 8 turns. In ohter words, about the same time it would have taken if we'd both been physically present.

We did not use any special equipment, just the Free version of Skype and the built in webcam. I need to find out more about using my digital camera as a webcam for the future as that would give me better resolution and make it easier to zoom in or pan the table.

Enough of mechanics, how did it go? 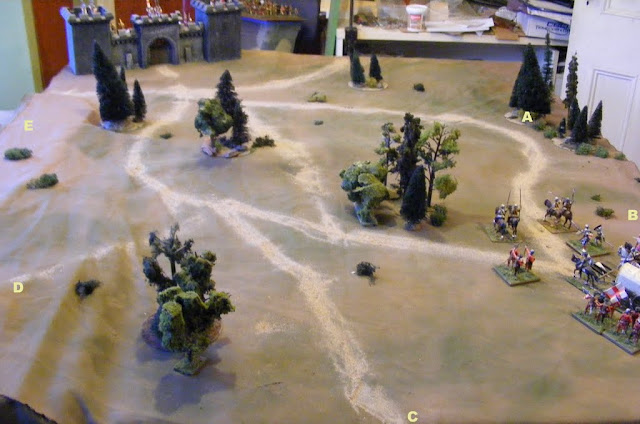 The table was laid out as close to the map as I could manage. The letters indicate arrival times. The convoy can be seen on the right, but the shot was staged as a pre-game look at the table for Rob. I fielded 2 stands or "companies" for each Grant unit.

Rob as the English, chose to come on the corner road, as above, but he decided to go left at the first fork and headed for the center road. He had obviously been practicing with his dice as its not easy to coax that many 1's and 2's from them. (the game uses variable length moves 2d6 for the wagons in this case) I maintain that the old driver of the first wagon was dragging his heels because he wanted to take the right hand fork. Rob's order of march was : Commanderand 2 companies of Demi-Lancers followed by the convoy. 4 companies of Bills & Bows on the left, a company of arquebusiers and one of sword & buckler men on the right. Two companies of Border Horse made up the rear guard.

My troops arrived early with 2 companies of pikemen arriving in the woods at A while 2 companies of arquebusiers arrived at  D, following a trail over a steep hill. On the 2nd turn, my infantry commander and more arquebusiers arrived at D, followed by Mounted Arquebusiers on turn 3. This was all looking surprisingly organized. Nothing else arrived on turn 4 but by now we were close enough to trade shots. I had rashly sent some arquebusiers skirmishing across the plain to shoot at his lancers, hoping to draw them up into the hills after me and away from the road. My shooting was bang on and the cavalry predictably lowered their lances and charged, I prepared to evade to the shelter of the steep hill, or my halbardiers but realized that I'd come too far forward. there was nothing for it but to stand and take it. Amazingly it worked. Rob showed that his movement dice were no fluke, snake eyes while I rolled a fat 6 causing a 2nd hit to the stand and removing it. In my mind it was a close range volley that took them down. A taste of the future.

By now the wagons were committed to the center road. Inevitably, on Turn 5, my lancers arrived at Point E, perfectly placed to intercept. At the same time, more pikes arrived in the wood (OK so that wasn't that well organized). Things looked tight for now but Norman's voice had a vaguely chortling  sound and I figured either my General and the rest of my cavalry had rolled a 6 and weren't going to make it at all, or else they were coming on at C, right behind the convoy. 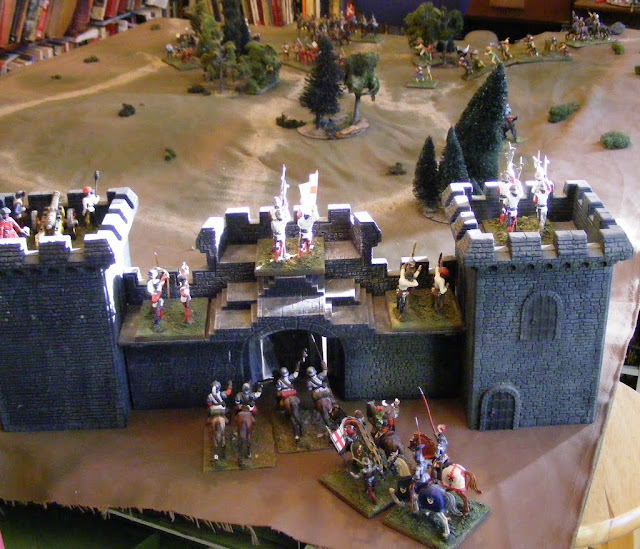 The view from the fort. The cavalry prepares to sortie as the enemy Lancers ride into range and line of sight of the gun. In the far distance, the cross of St. Denis can just be seen beyond the wagons.

Yup. C it was, my General and 4 companies of cavalry were now parked an inch or 2 behind Rob's rear guard. Only some lucky card draws would allow him to make a fight of it. 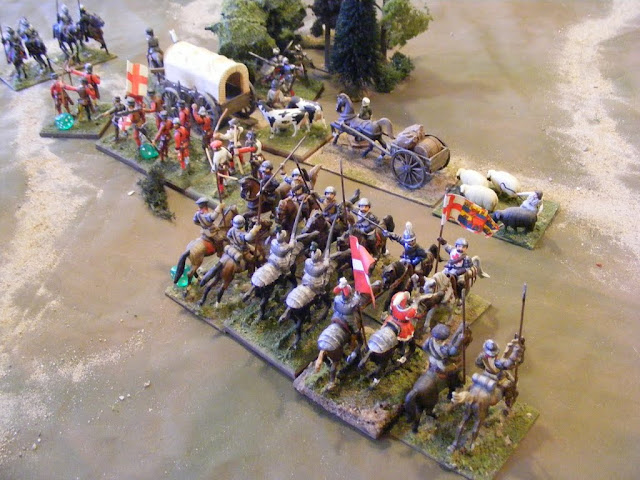 The cards obliged and Rob manged to pull back the border horse and turn around and bring up his demi-lance Commander, tuck the wagons in behind and move the light infantry up through the woods to get ahead of the convoy. He even managed to face the bows and bills about and unleash a flight of arrows. That, however, required dice and came to nothing. Moments later.... 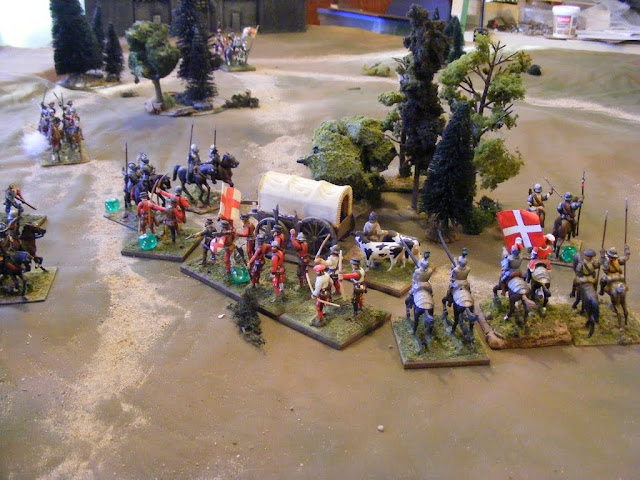 The French cavalry like foxes in a hen house.

The odds had been very slightly in my favour and a draw was as likely as any other outcome but the result was drastic and disastrous for the English. The French cavalry pursued, riding over 1/2 the convoy. On turn 7 the English Light Horse from the garrison made a bold dash for the rear of the French lancers but despite a very credible movement roll ended up 4" short. A unit of sword and buckler men managed to get in between the French and the head of the wagons but the horsemen were not to be denied. They rode down the English and 1 company pursued into the wagons while the other crashed into the bows. The game was over.

I've played this Wagon Train scenario times when arrival rolls or lack of arrivals made for a very challenging game but I don't  think I've ever not enjoyed a play through of this scenario. If the timing and arrival of the reinforcements had been different, if the wagons had rolled even close to average movement or if Rob had listened to the old Wagoneer and risked the right hand road, who knows? The main thing is that it was fun, and validated the remote game concept.