After the battle comes... 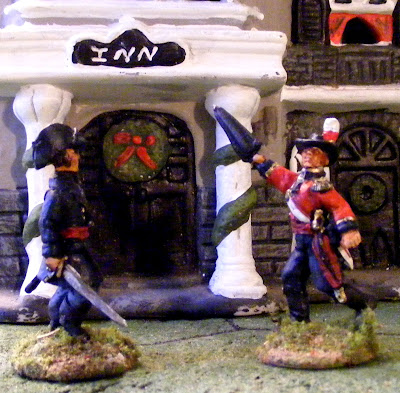 
Two Canadian militia officers on their way to the front. Both of Irish origin but born in the US and emigrated to Canada where they have just received their uniforms and commissions to go with their Sashes and Sabers.

The scenario was, of course, a somewhat reduced version of Sittingbad, the sample game from the Advanced Rules in Lawford & Young's Charge!  The table was about 1/4 of the original size and the units roughly equivalent to a Charge! company or squadron so also reduced by 1/3 to 1/4, except for the artillery which I inadvertently fielded at 1:1. The rules were the latest version of With MacDuff to the Frontier using 16 figure infantry units with 8 light infantry or cavalry.  If I had played the game in 20mm using Hearts of Tin I would probably substituted a 3 regiment brigade for each unit thus bringing the game more in line with the original.

The Red Queen's forces were selected to defend and deployed on table with the mission of defending a bridgehead for 15 turns then withdrawing as many troops as possible and blowing the bridge. In theory supplies are being evacuated but since the table was crowded enough with 40mm troops, I didn't bother adding wagons to be loaded and moved but like Lawford & Young assumed that the Commissary was looking after that part. I did use my own engineering rules for the demolition and the fortification of part of the town.

The Queen's army was composed of General Turner with ADC, 3 brigades, an independent battery of foot artillery and a detachment of 8 sappers with an Engineer. Colonel Nolan led the cavalry camped in the plain in the middle of the table: the Princess Charlotte Dragoons and Larsen's Lancers. Brigadier Stonefort's Brigade was composed of the Young Buff's and 1/2 the Green Tigers, both billeted in the town along with the artillery and pioneers. Brigadier Glasse had charge of the Victoria Rifles manning the outlying village of Fulford and the Royals camped in the plain.

The Blue Republic's troops were attacking from an off table position with 1/4 of the army allowed to enter on each turn. General Scott commanded with the help of an ADC. Brigadier Kearny was first on with 2 regiments of Dragoons and the Frontier Light Horse plus a battery of Horse Artillery. Brigadier St. John followed on the right with the Volunteer Brigade comprised of the Portland Rifles (light infantry rifles) and the Layette County Rifles (musket armed regular infantry in fact) and 2 batteries of artillery. Brigadier Zinn was last on, moving up the center with the 1st, 2nd and 3rd Infantry of the Oberhilse Field Force.

This was the first MacDuff game in which I used the PIPs and the ADC rule from Square Brigadier (the Pips part obviously being umh... borrowed... from DBA). I love the way the combination works. A well organized army can generally move what needs to be moved and a careful general can store up extra Pips before launching an attack so it won't run out of steam if he gets 1 bad roll. However, once brigades get broken up needing more command points to activate units and if there is a string of bad rolls or if a General gets over ambitious, tries to do too much at once and depends on a lucky break to commit the reserve... well... good luck to him. It is quick and has elements of both chance and choice and a minimum and maximum limit to what can be done.

In the game just played, the defending side managed to horde PIPS, passing up opportunities to rally troops or to make a response when needed to make sure there would be enough orders available when it came time to blow the bridge, even if a 1 was rolled. The Attacker, not only suffered from slightly lower than average rolls, but his attacks got split up and extra PIPS were used to keep pushing forward. Rarely were any spare orders available for Rallying and there was no time to stop the attack to reorganize. On the 2nd to last turn Blue had a chance for a final, last ditch assault with a chance, not a good chance but a chance to capture the bridge before it was blown, With all Pips having been expended already, a "1" doused that last ember of hope leaving only the chance that the demolition would flop.

However, it didn't take long to see that there was a mis-match between several rules intended for card or initiative play  where there was no telling who would be moving first or going twice and an IGOUGO system where Pips determined how many units could move but where the sequence never changes. Luckily, I had been working on a reaction system last year which I had really liked but had largely dropped because it didn't work well with an unpredictable sequence. There was a short break to fix the issues and I resumed play. The result was excellent! Its up to the General to maneuver his units but once engaged by the enemy they will fight on their own though a push from above is needed to keep them attacking.

I also faced another old problem which I had been dancing around. To get the combat odds to work the way I wanted, its easiest if I throw more dice than I am happy to throw. OK for an 8 man unit to throw 4 dice but when  a 20 man unit has to roll 10, my eyes roll too. The underlying issue is that there are some rare historical events involving very very short range fire that I want to be possible but not common. It finally dawned on me that any rule that allowed for the result to happen at 80 or 100 yards was going to be wrong anyway and that really, they were best considered a melee result and I just sifted back through last years experiments for the lower numbers of dice charts that had worked best.

When I wrote the first version of MacDuff, I was thinking in terms of 25mm fictional Colonial or French & Indian War games with a company of 8-12 regular infantry as the basic unit but provision for a 2-4 company regiment ala Charge! Once I started looking at refighting historical War of 1812, Afghan/Sikh War actions etc I ran into problems. Essentially most actions were either too small or too big and anyway, the company was never really a tactical unit so shouldn't have a separate existence. In order to fit any of the engagements on my table I needed a ground scale of somewhere between 15 and 30 yards per inch which left each of my figures representing 15 to 30 men because of the amount of table they take up.  On paper a company might have 80 men but in the field somewhere between 40 and 60 was more common, in other words, 2 figures, 4 on a good day.

Now my intent had been to follow  the philosophy of Lawford and Young and not get hung up on consistency of detail but somewhere along the way I have picked up a lot of baggage! Anyhow, reading back through various battle reports and experiments over the last 3 years reinforced my gut feeling that Featherstonian units of around 16 to 24 men worked best for me for TableTop Teaser type games as long as I didn't waste time and effort worrying about the underlying theoretical scales. My first choice was 24 man infantry and 12 cavalry/light infantry as they are very flexible numbers for when I do want to sub-divide when a detachment is needed and they look substantial enough on the table. Unfortunately, when using washers, a 12 man frontage is just too wide and I run out of room to deploy the troops on my 5x6 table.   Sixteen and 8 work almost as well on paper and were OK during this and other games but they are weak, especially if a detachment is made, and they just don't look like much.

Last year I tried 20 man units. You wouldn't think a few extra figures make a difference and this is  a very inconvenient number to work with but the units fit and they do look just big enough.  Its also a nice middle ground between Featherstone's 20+2 and Charge!'s 16+3 and it matches Mosrchauser's recommended unit size.  As it happens, many if not most of my Toy Soldier units have already been painted to the 20/10 standard so, so be it! My standard units for Atlantica will be 20 infantry, 10 light infantry or cavalry or 1 gun with 4 or 6 crew. Officers etc are included in those numbers.

In case it wasn't clear, I had good fun playing this game. In fact I meant to play for an hour and then go attend to some household matters but everything faded in to the background until the bridge blew almost 3 hours later.