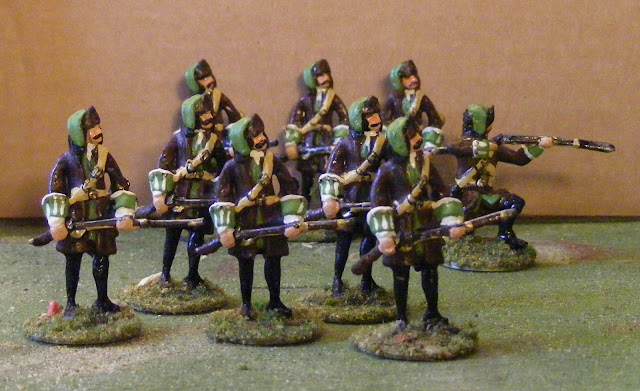 A new light company is born.

Yes, sad but true, the dogs went to bed at 11,  my wife was sitting up with her mother and facebook and I wandered off to my games room. There on the desk was a batch of 5 Chasseurs des Bois that just needed belts and buckles and a few touch ups. The radio started counting down as the last botton went on so technically they were painted in 2012 but varnished and flocked in 2013 so last or first, take your pick.

The unit had its origin at Historicon when I was offered a group of glossy figures. I was tired and helping GM a siege and I'm embarrassed to admit that I can't remember now who handed them to me but if I got the story right, they came from the collection of the late, wargaming great, Wally Simon  (see ) or perhaps that's wishful thinking and they were actually from the flea market called Wally's Basement in his honour. In any event, I accepted and they have stared reproachfully at me from the shelf ever since . They were obviously .early 18thC French  Dragoons in shiny red enamel coats with bright green facings but I wasn't sure of what age or make or how I was going to fit 8 of them in to my Charge! armies.

I eventually decided to prime them,  should really have stripped them first but the figures seemed thin and fragile with heavy detail so I figured the extra paint wouldn't hurt. Once they were primed, something about the figures started to look a bit familiar and it didn't take long to find them in the 42 mm  Toy Style Marlburian range in the Irregular range. By then though, I had already converted  a Prince August casting to fit in and was busy planning a light infantry company. My first thought was to ditch the light green facings but keep the red coat. Since I only have 1 red coated infantry regiment, they would become the light company but the uniform style was so at variance with the rest of my Irish that it just didn't feel right. Instead my mind drifted to the Queen's Brown coated militia.

Suddenly I remembered my first Charge! armies, 30mm figures made in Spain for the Plains of Abraham museum at Quebec. After painting various French infantry companies in historic uniforms I diverged into Imagi-nation territory making a squadron of Cuirrassiers out of officers, a battery of Saxon-ish gunners and a light infantry company inspired by a late 17thC Swedish unit in Kannik's Military Uniforms. Brown Coats, light green facings, stocking cap. Done!  My old unit had a bit of lace so the new ones do as well.  There are 6 fresh castings on hand to finish off these volunteers for the Dowager Queen, just need a little putty and some paint.

I don't have a shot of my old Canadiens painted as fictional light infantry but here's the Black Watch and British infantry that opposed them. Painted c 1973.
Posted by Ross Mac rmacfa@gmail.com