Its amazing how much time can be sunk in trying to reorganize a crowded room. Its like one of those Chinese puzzles where every piece has to be moved any time you want to move anything. After a full week with 6-8 hours a day (and that's more full than many of my "work" days, lazy slob that I am) the job isn't really finished, it has just reached a plateau but it is usable which it hasn't been since the week of troubles that started this year. 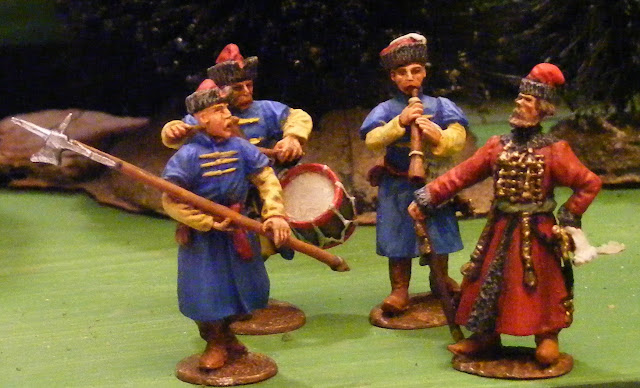 A gratuitous shot of some 42mm Drabant 17thC Poles that I bought 5 years ago because I am a big fan of With Fire & Sword and painted in November. Since there is no way I am starting armies of 42mm  Winged Hussars and Cossack, the original but vain hope was that I could fit these lovely guys into a future 16th C Turkish army as some sort of Slavic ally/subjects. Off to ebay I think before they can do any harm.

The difference probably wouldn't even be noticeable to a casual  observer but the shelves have been re-arranged to make it easier to see the troops and to get them on and off the shelf when needed. This has been accomplished largely by swapping out the brackets and doubling the shelves thus doubling the depth but also doubling the space between them. Since there was an odd number of shelves and extra shelves, left over from my previous 2 room set up, I was able to increase the total square footage as well.

While I was doing this I moved my painting desk again since the "new" location just wasn't working for me. My painting time seems to have shrunk drastically after I plopped the desk right in front of the door last year. I also squeezed in an area to store some non-wargaming tools - not yet totally organized, and I reamed out one the big hidden cupboard under the eaves.

In some ways it was a sobering if not depressing experience as I came across the trail of broken and abandoned projects left by my jumps from 15mm to 54mm and back down to 40mm, by the departure of friends  which left orphan projects behind with the thought that "one day" I would finish both sides, and of impulsive indulgences in Nostalgia, particular various old toys. There was also the shameful evidence of too many moves to inadequate spaces without proper storage over 40 years and of widely traveled armies full of multi-part figures and delicate conversions. None of this was new of course but it was intensive since I spent a whole week at it. Most of the evidence has been re-buried more neatly but not all of it and my determination to look ahead not back has been reinforced. More winnowing and tough  decisions lie ahead I'm afraid as I combine that determination  to finally start doing many of the new things I have put off with a renewed determination to live within my space, energy and time as well as my means which entails being able to display and play with what I have without the weight of hidden hordes and of constantly improvising too many things at once.

I have sampled widely for 40 years and have spent the last 3 years in particular stress testing  choices and narrowing requirements while wallowing in nostalgia. Its time to move forward into calmer waters.
More than that, I finally succeeded in cleared the table this morning and can now move freely, all the way around it without dodging things. Time for that delayed game of MacDuff.

ps The title comes from a line in a Joan Baez song, "We all know what memories can bring, they bring diamonds and rust". Also covered by Judas Priest apparently, who knew? Anyway for those not familiar: