Friction in Life and on the Table

My planned Winter Campaign Season still seems  to be more like the Winter Construction Season but not only is there progress on the domestic front but I slipped away for a game on Friday. 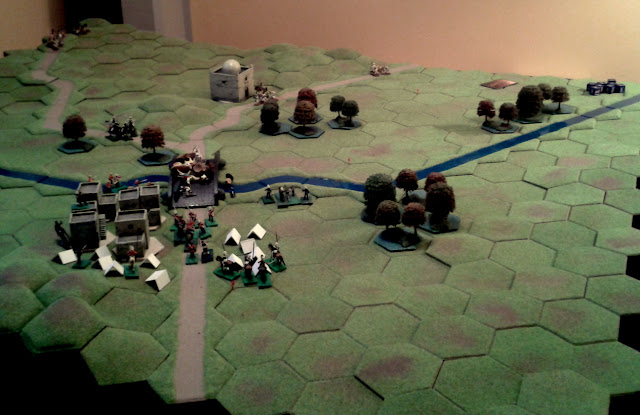 Somewhere, in a land long ago and far away, the British are trying to blow a bridge before an advancing force of hostile natives can seize it.

Yes, it was another Colonial Battlecry Grant Teaser and another fun afternoon full of dice, decisions and desperate moments. Ron is still on a Sudan kick to the point where he caught himself pricing another table full of desert terrain.   I'm quite happy to consider it just another Colonial campaign somewhere.

Our rule variant seems set with our native firearm skirmishers having a factor of 2-2-2-2 while the spearmen are 4--- (Brits are 4-3-2-1 for comparison with that being the number of dice rolled at 1,2,3 and 4 hexes). The natives are allowed to retreat a full move on a flag while British regulars may ignore 1. A random process ended with me being the native and attacker coming in from off table while Ron's troops were asleep in camp apart from some Engineers busy planting charges. There not being any rules for demolition, we allowed an Engineer officer (treated as a General) to plant 1 die each time the unit he was with was ordered and did not move or shoot. The dice could be rolled if ordered to battle with crossed sabers being a hit on the bridge. 3 hits being needed to destroy a section. 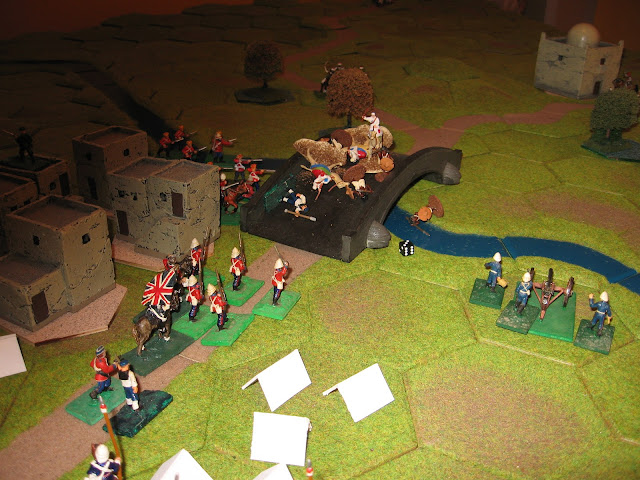 The Infamous Camel General has 2 more units shot out from underneath him.

I elected to come on in two columns, cavalry supported by riflemen and shock troops on the right, riflemen, a cannon and spearmen up the center. There were 2 probable options for me,  push troops forward and make a concentrated attack or send troops forward as quickly as possible, hoping to forestall the engineers. Given my lack of firepower, a mad dash seemed the best route and my cavalry almost wiped out the engineering party, thanks in part to a random reinforcement of Fuzzies. For back up though, instead of  more spearmen to keep up the pressure, I had snipers and a very slow artillery piece blocking the road. Oops. 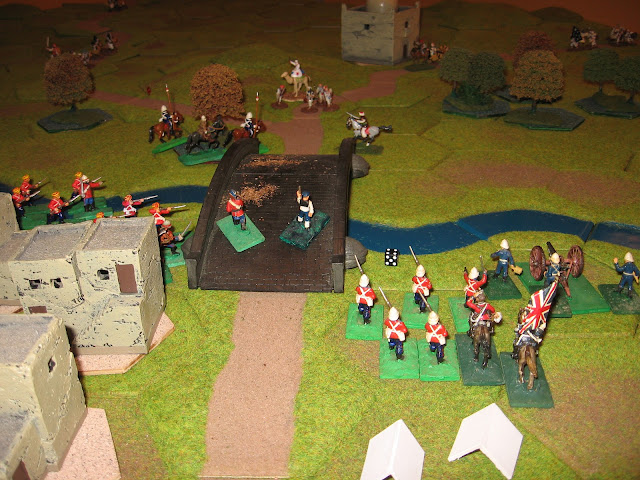 Work resumes while some lancers guard the approach.

It took a while but eventually the sniping did some good and more spearmen were finally in place as the sun went down. They managed to capture the center of the bridge but the far end was blown in their face. The bridge wasn't totally destroyed but it was not completely intact either and in any case, despite  having 9 units of spearmen in reserve, I hadn't  captured it. (Once again we played all the way through the deck with that being a day if neither side breaks). 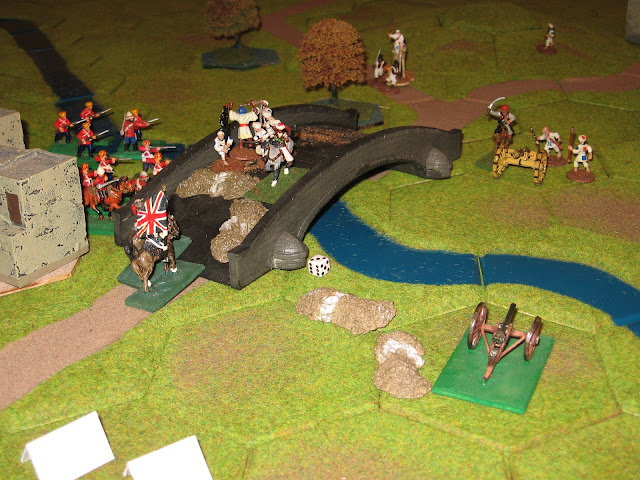 There were times last week when we had one problem after another, chimney fire, pump problems then a hot water tank leak, and it felt like a bad hand of cards or a series of bad activation rolls. Looking more calmly though each of the problems we had was the outcome of a known issue which we had not dealt with fully yet and were just hoping could be put off a while longer. They weren't really random at all. Many military blunders or misfortunes are similarly related to a failure of commanders to be sufficiently proactive. During the game there were several times when I either didn't have the cards I wanted or couldn't make good use of some really good cards that I had. It might have felt a bit like bad luck but if I had thought more about the capabilities of my troops and what the mission and situation was that I was sending them into then a battle plan which drew on my strengths, not on my weaknesses would have allowed me full use of those same cards and might well have changed the fortunes of the day.
Posted by Ross Mac rmacfa@gmail.com