A fresh onslaught on Faraway has been launched by Oberhilse's Bluecoats under the command of General Scott. Ever since the rebellion in the Blue River Valley, there has been speculation that the Republic would try and profit from the disturbance and at last it has come. General Turner had just time to rush to the front by rail and then horse to take command of the Queen's forces at Standington.

Every one expected a swift withdrawal in the face of a superior force but General Turner is not one to abandon the property of the Queen's subjects to the enemy who is well known to make no distinction between private and public goods. It was deemed  particularly important to convey the stocks of medicines and food stuffs from the Drug Store and Market in Standington and so the Queen's Redcoats found themselves roused early on the morning of the 27th past and marched out to meet the foe. 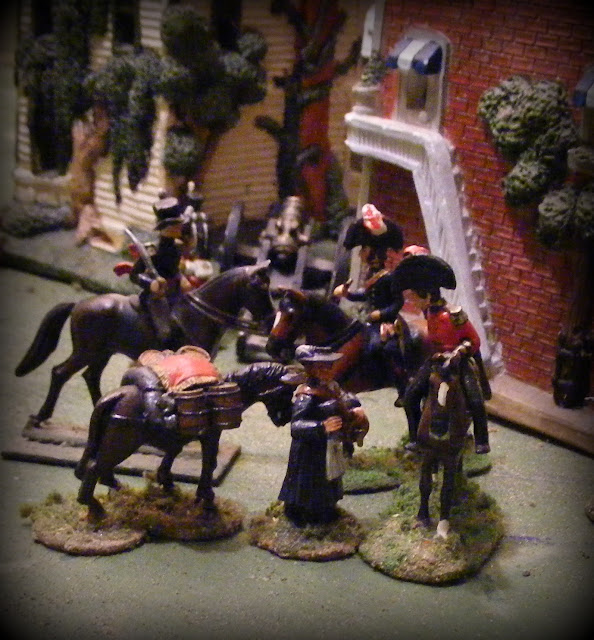 Rarely have I seen such confusion. The Queens troops spilled from their billets and made their way eastward through throngs of the Queen's loyal subjects hurrying to carry their most precious belongings to safety. Carts and wagons plugged the streets and a cacophony assaulted the ears. Suddenly the booming roar of a cannon announced the arrival of the foe. This had a salutary effect on increasing the speed of departure but it was clear that it would be late in the day before the bridge was clear of civilian traffic so that the Queen's troops could pass over, destroying the bridge to deny the enemy passage. Since it was likely that a day's battle lay ahead, a few of us climbed up on the rooftops to view the coming action while we waited for the pressing crowd to thin. 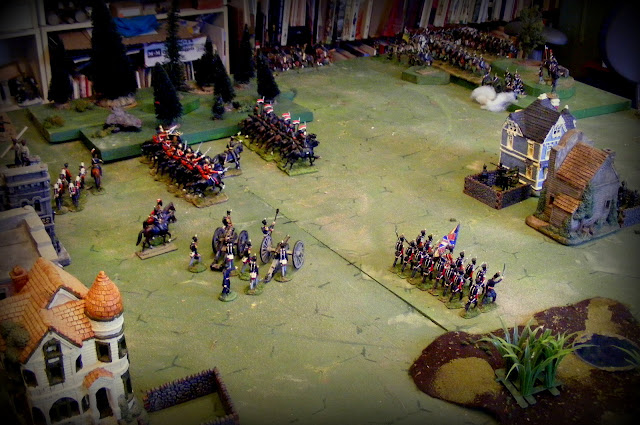 Far off in the distance lay Iron Hill which was topped by blue cavalry and the battery that had caused such alarm. Between the town and the hill lay the Cavalry Brigade of Colonel Nolan, the target of the enemy's attentions. To their right front the Victoria Rifles could just be seen putting the little hamlet of Fulford into  a defensive posture with the Royal Fusiliers under Brigadier Glasse in support. As we watched, the guns of Battery B of the Royal Artillery galloped out of the town, across the plain, deployed and opened fire, driving the Blue gunners from their post. Behind them came the red coated infantry of Brigadier Stoneforte, marching apparently for Iron Wood to answer the threat to the left flank offered by Oberhilse's Frontier Light Horse. Across the street we could hear pioneers hard at work turning the Drug Store and Market into small forts. 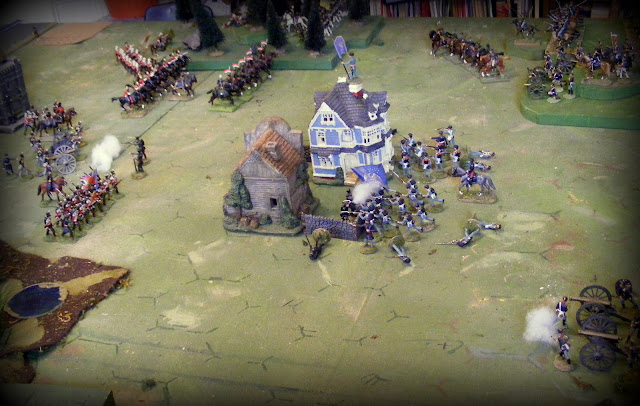 For a while I thought perhaps that the threat had been exaggerated and this was all the excitement we were to see but then more enemy were spotted cresting the hill, first green clad riflemen then the  dark blue coats of the Lafeyette Volunteers. Soon after that we heard the sharp crack of rifles  from Fulford. While we had been distracted, the soldiers of the famous Brigadier Zinn's 1st Brigade of the Oberhilse Field Force had deployed and were marching rapidly to assault Fulford. Outnumbered 4 to 1, the Victoria's were soon bundled out of town, rallying behind their supports. 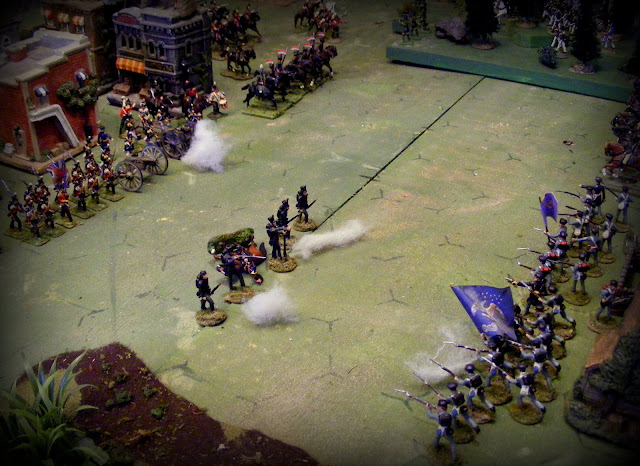 The sun was climbing high in the sky as the blue infantry reformed their lines under the cover of a heavy long range fire from their guns on Iron Hill and on the plain near Fulford. As their cavalry finally moved forward we expected a tremendous fight but General Turner is not one to throw away troops and at the last moment the red line filed to the rear under the cover of skirmishers like they were on parade. The Frontier Light Horse galloped forward, firing from the saddle and yelling like Hooligans but a short sharp charge by Larsen's Lancers scattered them to the wind and the retirement continued unhindered.

Looking behind, we could see the traffic thinning and the sight of pioneers laying charges led a few of our company of onlookers to excuse themselves and head west to attend to their affairs. 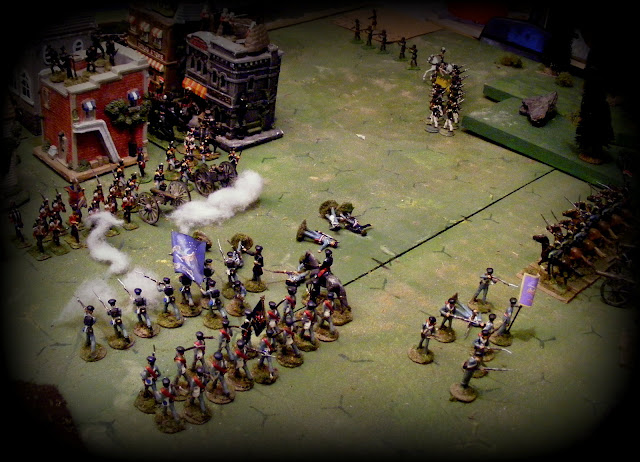 From the woods, down off the hill and through Fulford, a tide of Blue surged forward and suddenly, the plain which had been so full of red a short while ago , was a sea of blue. Soon volleys of musketry rippled up and down as the infantry engaged but the guns of B Battery swept away all who stood before them. 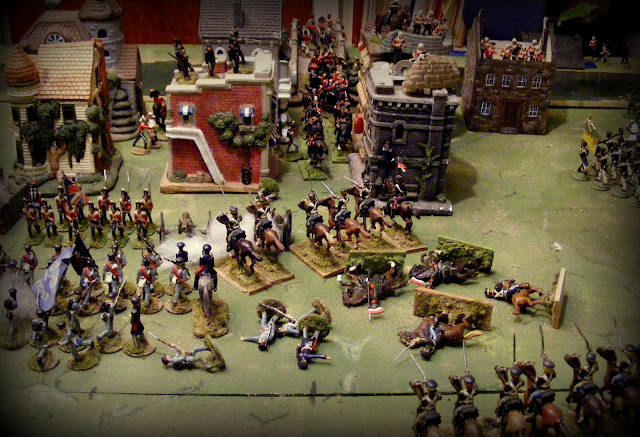 Suddenly, over top the constant rattle of musketry we heard an urgent bugle call,  repeated, again and again. From behind us came an answering call and looking down we could see the magnificent Lancers sweeping forward again, deploying by troops as they exited the streets and disappearing into the smoke. Moments later a handful of riders and somewhat more empty horses swept back down through the  street. To our horror, they were followed  by a horde of blue clad Dragoons! Charging out of the smoke they were in amongst the gunners of B Battery before another shot could be fired.  What chance did they have? Those gunners who survived ran for cover leaving their guns in the enemy's hands. The Royals, their flank now exposed, had no choice but to also fall back into the protection of the houses behind them. 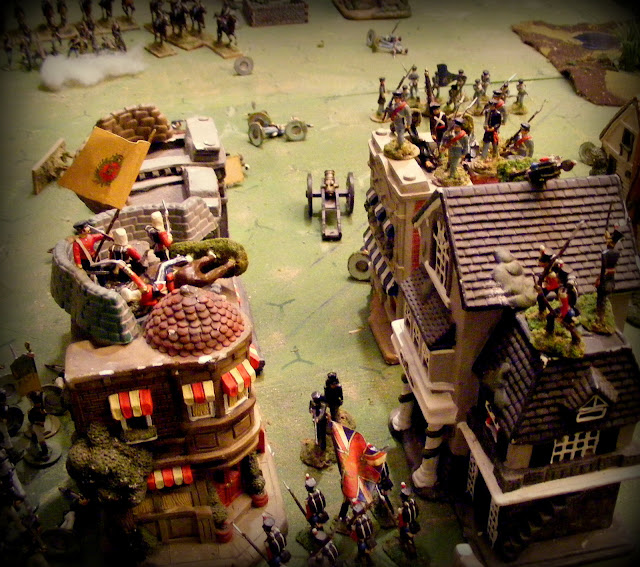 As the enemy cavalry pulled back, we faced a fresh horror. Suddenly shot and shell from the enemy batteries, unchallenged since B battery's demise, rained down on the town. Below us, we could see the enemy's First Infantry with their famous red raincoats rolled over their shoulder as these veterans faultlessly performed the complexities of a passage of lines under fire and prepared to assault the town.

The sun was now low in the sky and it was time for us to go so we wished the Victoria's well as they took up defensive positions and we made our way through the streets dodging stray balls, dust and debris. Behind us we could hear the roar of musketry as the assault went in and soon a Blue enemy flag could be seen on a roof top and small groups of wounded and of haggard red and green coated infantry were falling back through town.

Ahead of us, the horses of the Princess Charlotte Dragoons filled the bridge and suddenly we could hear firing ahead of us from along the river bank! The enemy infantry that we had seen emerging from the woods must be assaulting the bridgehead! Casting our eyes warily about us we pressed down the street, through a company of the Royals deployed at the very foot of the bridge and all but scrambled across the bridge as the engineers were preparing to fire the fuses. We, with the Royals on our heels, had barely cleared the way when there was a tremendous roar and the sky was full of smoke and debris. 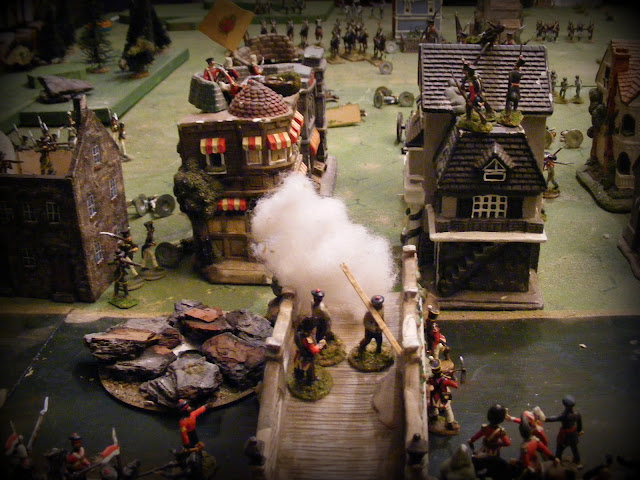 When our ears cleared a little, we could hear the subdued rattle of musketry still. It appeared that the stores had been evacuated and the bridge successfully blown but 2 companies had had to left to hold the bridgehead. Casualties had been heavy on the troops engaged, including 2 Brigadiers, with only the Dragoons escaping unscathed, and two guns had been lost but the mission had been achieved and the enemy had suffered even heavier losses in men if not material.

As usual, once the heat of battle had cooled, our enemy was gracious and allowed us to evacuate our wounded and the remaining companies. A truce was patched up leaving Standington in enemy hands for now but I do not expect it to last.