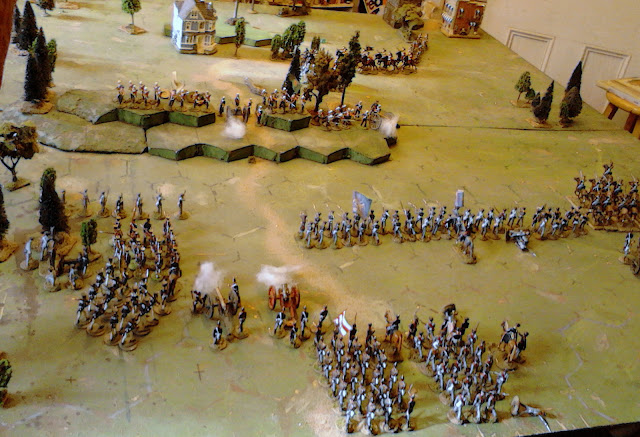 Its been a busy week non-hobby wise but whenever I've had a moment and able to keep my eyes open, I've been slipping upstairs and exploring what's ahead in wargaming terms for my mid-19thC toy soldiers. (I've also been poking my head into dark corners looking for my camera, sighhh .... )   Only  the final game got played all the way through but I did enjoy some aspects of all of them even once I identified various issues. The tests were practical ones but the questions were part practical, part theoretical, if not downright philosophical.

The main questions, none of the new or original,  were:
a) Do I still wish to pursue a gridded game.
b) How many figures is enough and how many are too many?
c) How many units are enough and how many are too many?
d) Is it better to have a few resilient units that need more thought on how they are handled or a large number of ones that are individually disposable with the focus being on groups of them?
e) What level of historical action do I want to represent with the toy soldier games?
f) Does the command & control feel appropriate for the each of the various levels I try and what would need to change if it doesn't. 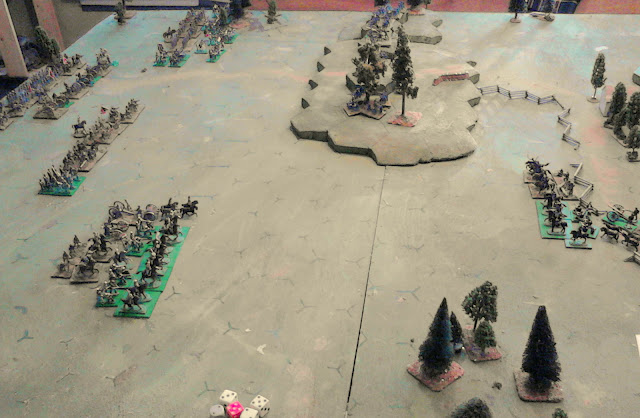 1/72nd modified Square Brigadier game with 4 infantry brigades each of 4 regiments plus a cavalry brigade and 4 batteries vs a slightly smaller force with similar organization.

While clearing away the first ACW game,  the one which stopped when I decided I didn't feel like digging out and using more marker dice, it occurred to me that since many of the volunteers who showed up last year were on smaller bases or had come off their bases, some  rebasing was in order no matter what I did. I'm also sure that there are already more painted figures now than I could squeeze onto my table with my current 4 man bases. It also occurred to me that I could squeeze 4 of my stands into one hex. So I reset with 23 units representing about 9,000 men with 24 guns vs a slightly smaller defending force. I started with a Battlecry variant and switched to a Hearts of Tin/Square brigadier Blend. The result worked as a game but I was having trouble rating it for historical feel  since I'm not sufficiently familiar with enough ACW actions of that size but I had a vague feeling that the gap between deciding to do something and doing it was too short, that there was too much control of units in close proximity to the enemy and that units didn't last long enough. That said, some aspects like the value of supports and the difficulty of controlling a broken battle line felt right.

Once I felt that the game was working but needed an hour or more to finish and also recognized that I was in danger of confusing the 1/72nd ACW and mid-19thC Toy Soldier games, I stopped and packed up the ACW. In its place I laid out a MacDuff game. Technically this was 16 x 8 man companies on the attack but it was basically 8 x 16 man units. Oddly, just like the last couple of times I tried this, the rules worked OK but there just wasn't enough room on the table to maneuver and it became a bit of a roll up and roll dice game which doesn't interest me at all.  It also happens to be bigger  than most probably actions were I to ever want to do a Fenian Raid or Metis rebellion "what if" game.  Including the light infantry this was 3 Brigades each of 3 battalions or about the size of some of the smaller Sikh & Mutiny battles. I did think about resetting with just 8x8 man companies but I didn't think that the use of rifles would make it sufficiently different from the War of 1812 to be worth trying.

For the last game I went back to the Square Brigadier/Hearts of Tin blend using the scenario order of battle, counting 2 guns as a "unit" and without worrying what a "unit" was. Hit points/morale were taken from The Square Brigadier but I used 6 infantry, 4 light infantry or 3 cavalry counting the front rank of infantry as a single hit/morale point.  The result was a very engaging game, I just was not sure exactly what it represented. Oddly, thats the sort of feeling I get from Battlecry, I have fun, it feels somehow right but at the same time, I can't quite relate it to reality. Kinda like a game of Toy Soldiers now that I think of it and that was kinda the idea for this year. In any event, it took 5 sessions over 2 days but I played all the way through, something like 12 turns, maybe a few more and perhaps an hour and a 1/2, longer including just looking at or thinking about the game. 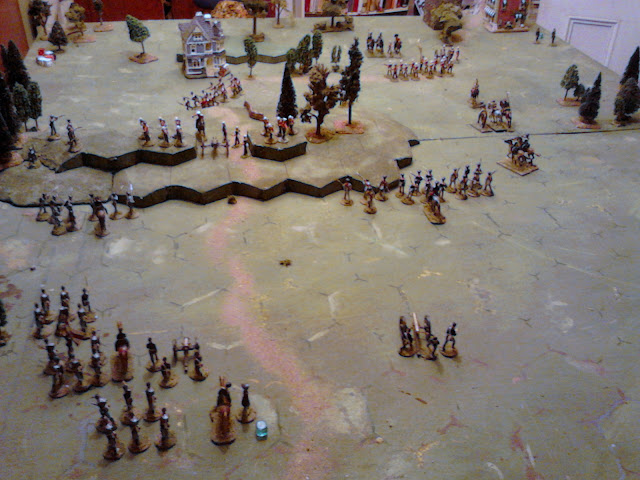 About 1/2 way through the final game.
I don't have definitive answers to all of my questions but I do have some preliminary ones.

a) Yes, I don't need a grid but I find it convenient, especially when I'm tired.

b) Numbers depend on the figure size but if I use 1 unit per scenario unit then about a 3" to 6" frontage per unit works in my table. 6 x 40mm toy soldiers seems to work and is convenient with the current rules but 8 works space wise and remains consistent with MacDuff for cross over purposesl.

c) Using wargame forces of the size in the Grant & Asquith scenarios seems to work well for an evening game.
.
d) I think its most satisfying to have fewer, identifiable units than a faceless mass but this means they need to be resilient or the game will be over in a flash.

e) Having stopped to browse a dozen ACW, Crimean and Sikh War/Indian Mutiny games, the big battles really need a different treatment on my table and I'm not sure that the sort of decisions made by then historical commanders are the sorts of ones that I want to be making,. Despite the occasional desire to be a Big General, I think I'm happier in the traditional mini game, closer to the powder. Small battles, raids and ambuscades.

f) in part the C&C issues relate to actions corps sized or larger. That said I am thinking of a few twists to reward leaving a reserve as a reserve until its time to commit it. This might take the form of something like a double move when a designated reserve is committed or a ban on group moves when close to the enemy or something else or maybe just a system with longer moves but also multi-turn combat resolution.

One thing I didn't check out is whether or not this sort of gridded set up will provide a fun game with forces 1/2 this size. Based on some of the card table games, it should. Another issue is how many grid squares do I need and how big is too big? I think the next step is to lay out 5" squares on the canvas cloth and try that out. I'm happy with the over all feel of the rules but I have some decisions to make on things like  "1/2 hits in cover or cover lets a unit cancel 1 hit". I have however decided to back out of the universal set and do a couple of cleaner variations on a the theme to start with, using the same basic construct but with only the appropriate troop types, factors and tactics  and not necessarily in scale with each other. Initially  these will be a revised Gathering of Hosts for Ancients and the Square Brigadier for mid 19thC. Others will probably follow. 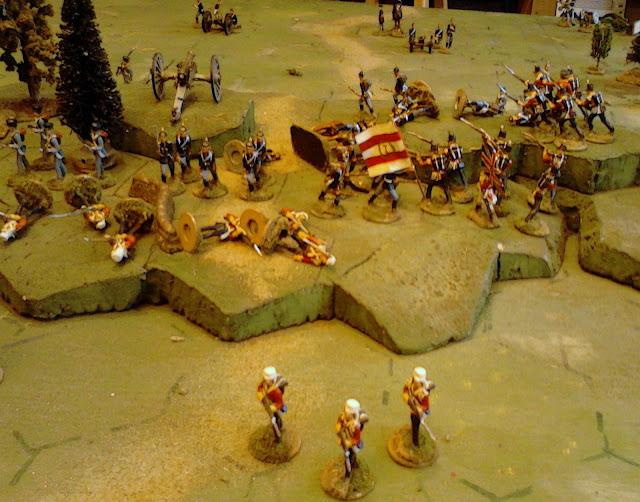 The Blue Guard supported by the remaining elements of the first wave, storms the hill rolling 3 x 5's and 6's to break Red's morale and take the ridge.