Well, we're here, wherever here is. 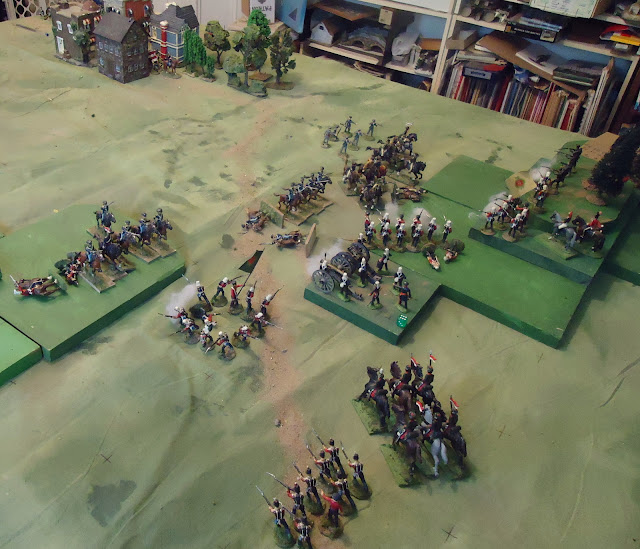 The scenario stresses that speed is of the essence for the pursuing army and the Order dice were not kind to the Blue General. It was a long shot for an assault by 2 heavy and 2 light cavalry units to break the enemy line on their own but the Blue Dragoons came perilously close to succeeding. Note the dead Fusiliers and Brigadier on the Western shoulder of the pass and the rallying remainder beside the cavalry. Luckily the Green Tigers hasty square held.

A few stats. The units were composed of 12 infantry, 6 light infantry, 6 cavalry or 2 guns with 8 gunners giving something like 180 figures on the table. The game was fought in about 8 sessions over 2 days totalling about 3 hours. 16 out of a possible 18 turns were played.  This matches the norm for a MacDuff or  an older Hearts of Tin game though the figure count was perhaps lower than some of the more recent, overcrowded games. All of this seems to support that the grid did not detract from the game. The only advantage of the grid seems to have been that it was easier to transfer the layout to the table and I didn't have to constantly circle the table looking for at least one of the 1/2 dozen measuring devices in play. That is probably enough to justify continuing with it and finally getting the hills cut and hills and table painted to match each other. 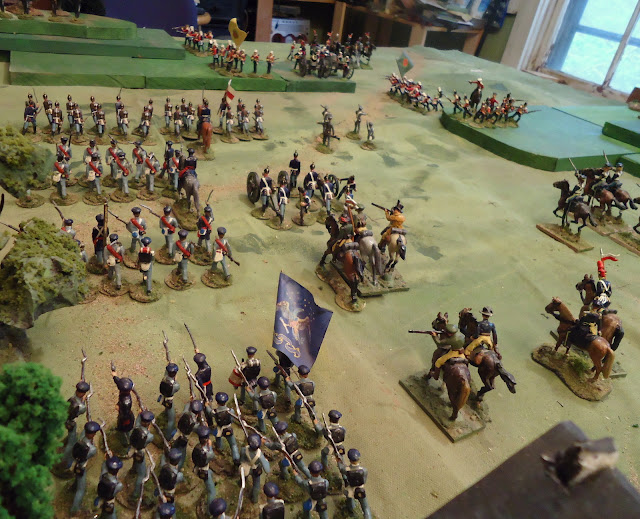 Looking back at the questions from last week, the answer to the grid is still yes and 150 -200 figures seems to be enough for me now when it comes to 40mm single figures anyway although I might double that for 1/72nd figures on multi-figure bases. Again the number of scenario units works well in game terms and the resilience in the rules used was just right. I'm still a little unsure about units, historical levels and how command control is handled for historical refights but more on that later.
. 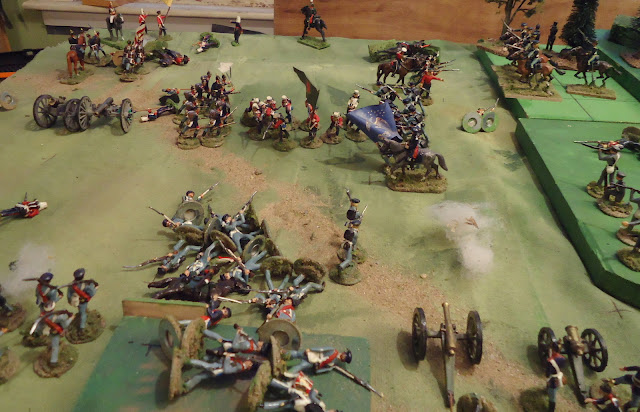 Since time was supposed to be of the essence, I was unsure how many turns to allow but decided that brushing aside the rearguard within 12 turns would be a definite Blue victory while holding for 18 would be a clear Red victory. At 14 turns it looked like Red might just do it. All of their units were battered but only 1 of the original 7 had been routed or destroyed and Blue's units seemed to be in disarray and out of position.

The orders finally started to flow however and Blue took some tough decisions to slow down and prepare the final assault despite heavy casualties from fire. Fortune favoured the plan and on turn 16 an assault by the Blue Guards on one flank and the 1st Dragoons on the other cracked Red's force with the General going down and three units being destroyed or routed off table. Given the late hour, Blue's heavy losses and the small number of men in position to continue the pursuit, it was a marginal victory at best. Still, after the last 3 defeats, the next game might have to involve a fortified Red position under siege!
_____________________________

One of the unanswered questions was just what was the actual size of this game? The  units were treated as battalions and ranges reflected a scale of 150 yards per square, the same as HofT. Should it perhaps have been more like 50 yards with units being double companies? How would that change in ranges and command levels have felt?  In most Napoleonic or ACW campaigns, an action between a handful of battalions would barely rate a foot note but during the War of 1812 on the Canadian frontier, an engagement with this many troops would have been a major battle and was similar in size to Grant's first independent battle at Belmont. Its all about context. The traditional approach has usually been to fudge it once the rules are written and for a one-off non-historical game, it doesn't really matter but for campaigns and historical refights, it's something to think about.

This immediately brings up another issue that I have been fumbling with for years. The sort of might-have-been, Canadian/British vs US, mid-19thC, scuffles that were the original basis behind the now fully fictional Oberhilse & Faraway setting end up being very similar to the War of 1812 even allowing for slight advances in technology and an increase in populations and development of roads etc. If I am to now indulge a long held interest in painting late 19thC Canadian militia toy soldiers, can I sustain doing the same thing yet again at the same force level and style of game or do I need  to break the mold and do something very different? It was my intent to do the latter but the danger is of trying to be different for the sake of being different. The idea I had was to do a small Battlecry/Portable Wargame type game with say a dozen 4 figure "units" on each side. A simple project needing barely 100 figures but should the units be companies for skirmishes and teasers or battalions for the same old same old, or perhaps brigades in a new mega game?

If I were going to buy the figures, some version of this small game would be a VERY attractive prospect but I have been promising myself that THIS year, I will finally try out my poor neglected spin caster. I don't really nethe units           ed a spin caster to produce perhaps a dozen or less of each new figure, so, there is actually incentive to try and find a use for several hundred new figures. If the Little Britain's looked more Britain's-ish and less germanic I'd be tempted to just sell the darn thing and go the easy route but at the same time the prospect of getting back to some sculpting and casting is enticing. So if I'm going to do more 150+ figure armies how do I make the games different? Try again to experiment with skirmish games perhaps? Something to revisit.

Lastly and briefly, the Command Control issue is still on my brain, especially for solo games. The only systems that come even remotely close to the real thing are ones where player generals with limited knowledge write orders to subordinate players who in turn write orders for their troops and even those systems seldom deal effectively with the questions of how and why reserves were used. Well, limited info for both sides of a solo game  really requires some form of AI to avoid turning rational acts into random ones, so I'll let it slide. The order dice combined with group moves and an ADC as used in Hearts of Tin is still  one of the best systems I've used. In this game it nicely reflected the scenarios description of a disorganized pursuit with the General having to balance the need for speed with the efficiency of good order.


******
Please note that comment moderation is in use.
Anonymous comments containing links will be sent to spam.
******