Well, Huzzah is over for another year. There are two bright sides to this, firstly the date for next year has been announced and it looks like I have no scheduling issues so plans are already afoot for next year, and secondly, I was starting to feel a bit jaded last month but am now restored to enthusiasm for the hobby. I will deal with plans for this year in a future post but here's a brief look at my Huzzah weekend. 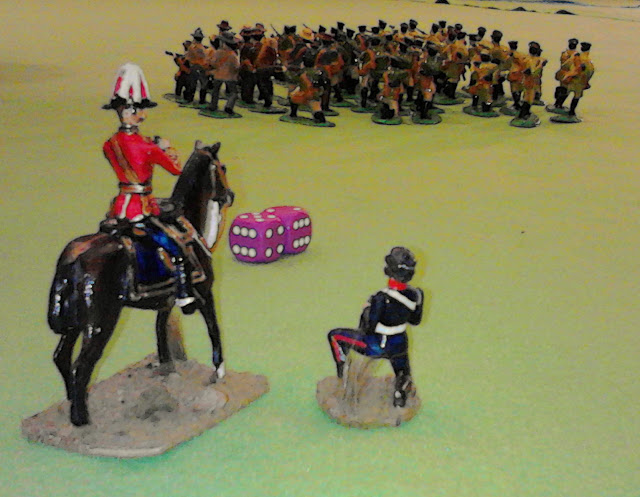 General W. Britain and Major Stuart came along as observers to the Funny Little Wars game.

It was roughly 500 km each way, I could probably have driven straight through, taking about 11 hours, but  I stopped for the night to visit my sister and our niece who, rather conveniently, live on an old farm roughly 1/2 way. My sister was not only nice enough  to also put up Jeff, my friend and fellow  gamer, but she even slaughtered one of her kids to make supper. Ok that's not strictly true, Dorothy was a young adult goat when slaughtered and that was some time ago. The journey continued on Friday and we arrived in Portland mid afternoon (thanks to the time change from Atlantic to Eastern Time Zones),  time enough for me to sell off some old books to Dean Emmerson and meet up with Rob Dean (see Sharp End of the Brush) and go for supper before our 7 pm game,  abandoning Jeff to set up his 15mm Austerlitz game on his own, mostly. Unfortunately, I have no pictures of the game or the playtest we did last week.

The rest of Friday was taken up with Chris Parker's 40mm AWI game based on Guilford Courthouse. The rules were based on Battle Cry with lots of modifications. Since I've playing similar games here I was quite interested in swapping ideas. I think I had the better of the deal, or will have if I can convince Ron. Under the small world heading, Rob, Ross and Ray formed the American command. In the course of some off topic chit chat we discovered that Ray often visited Fredericton and knew my niece and my brother.  It was a close fought game, the British won the first round despite, if not because of, my chewing up the British left, but the American's managed to pull out a draw by the end so all was well. It was one of those typical Battle Cry squeakers of a finish and put me in the right mood to go off with Sam Adams and Rob for more chat about life and wargames projects. . 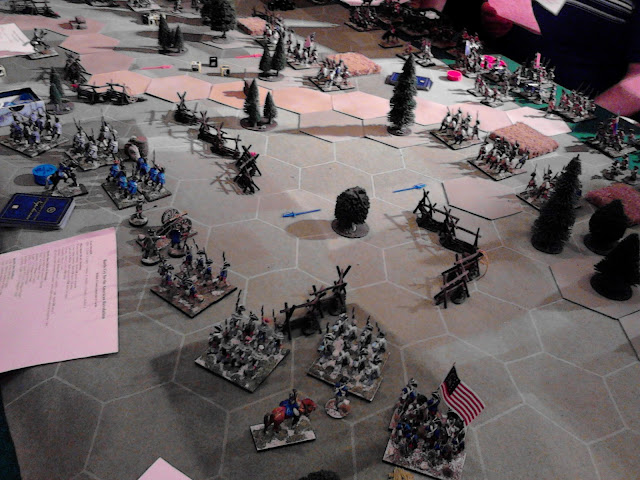 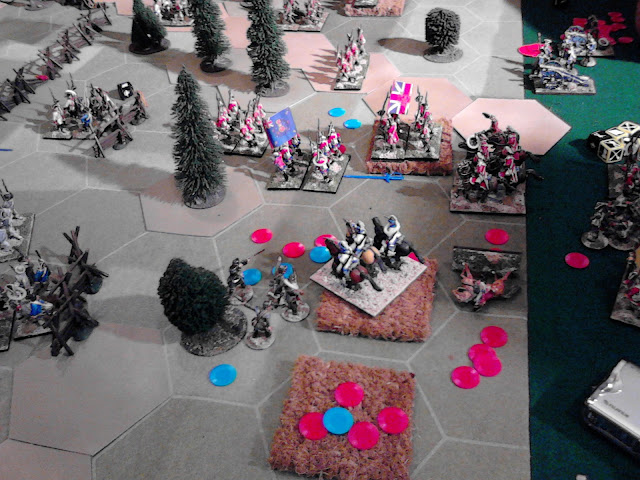 The Red and Blue poker chits are a record of where units took hits. I know that some Nova Scotia gamers might find this hard to believe but after a bloody see saw battle in the wheat field,  those Blue dots are my casualties while the piles of Red chits represent most of the British units entrusted to our very own Gary.

Saturday morning I decided to lay low, see the sights, chat and  go table shopping. Gosh those Eureka Miniatures are beautiful! Almost broke down and laid aside the "no 28mm" rule. But I persevered and only bought a handful of 40mm Trident AWI to add to the existing collection, mostly civilian types inc a milkmaid a milking, Laura Secord in some future 1812 game no doubt. And 1 book Barnes History and Uniforms of the British Cavalry 1066 to 1945. A companion to his books on British  and Scottish Regiments which I've had since my teens.

Saturday afternoon was Funny Little Wars hosted by Dr. Mike Fisher (see his blog). I was surprised not to see more players there but 5 of us were enough to manage under Mike's guidance. Bottom line, my clever plan to mislead the enemy, amuse his forces with my cavalry, seize the town then double  back and take the bridge. This almost turned into, let Rob shoot down all my cavalry while the enemy storms the town but Rob settled for lobbing shells well over the heads of my cavalry while they skedaddled and only rifled a few and Dean stoutly drove off the enemy and secured the town. A counter attack by the enemy cavalry was driven off but a follow up by my cavalry  merely added to the  toll when Rob's rifle dice suddenly averaged out. So there we were at the end if the day, lots of dead and wounded and one objective each. A little more terrain might have allowed for a more subtle attack plan but good fun was had which was the point really. 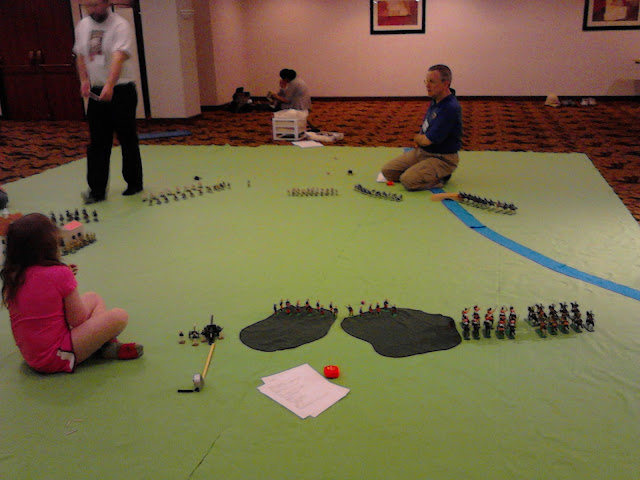 Rob in blue anticipates my plan (rats). In pink is Major Natalie in charge of our artillery. 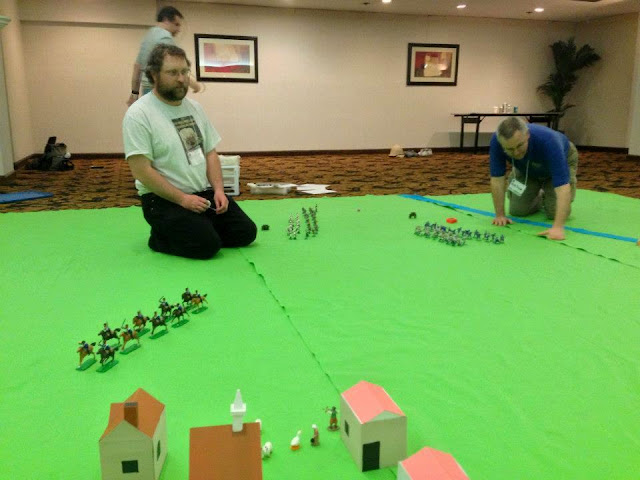 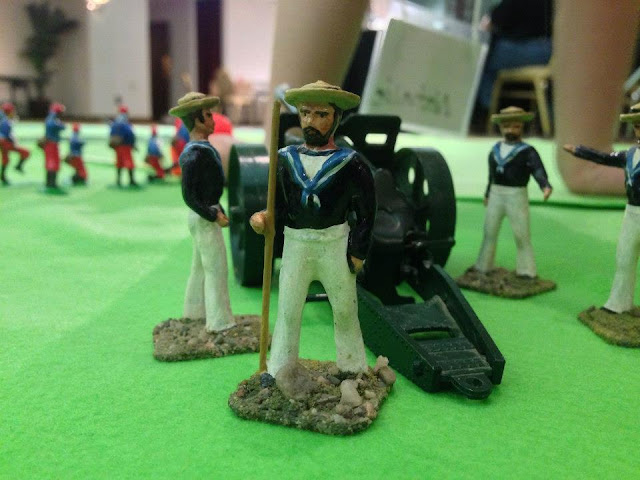 I hadn't seen any 4.7" guns in Mike's Arsenal so I brought along one and a Naval crew of Soldierpac recasts, just to be sure. Here they were preparing for the first time to fire in earnest against an unknown foe. 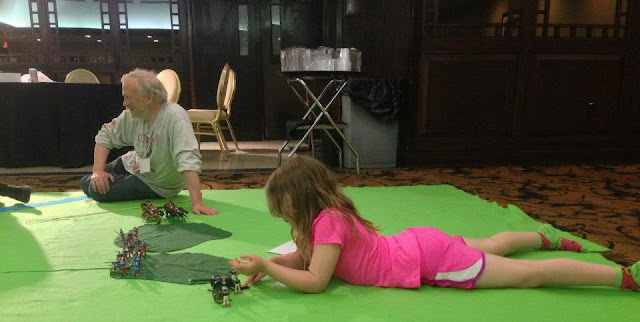 Major Natalie fires on the enemy while General Ross spots. 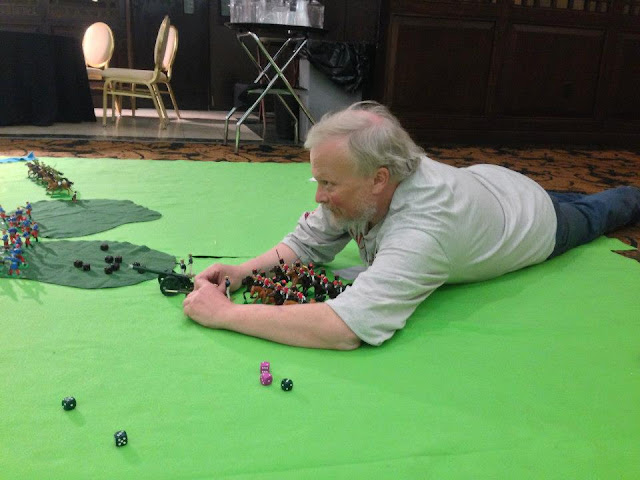 Later, the Major is momentarily occupied and I took over the guns briefly during a critical moment. The enemy cavalry was approaching and I planned to wear them down with artillery fire then ride over the remnant with my cavalry reserve. Another plan down the tubes, when the smoke and dust cleared not a man or horse survived for my eager troops to charge!

At last came the main event, well for me anyway, my Fort MacDuff game. Might have been nice if I'd brought my camera or even if I remembered more often to haulout my phone but there we are. I don't think it looked much different from the playtests despite  the table being 50% larger than anticipated. I planned for 6 players with provision for 2 more and I ended up with 7 excellent players who made running the game a pleasure. We were interrupted briefly by a ribbon presentation for the judges choice for that time slot which was gratifying even before I found out that it came with the means to bring home a few extra 40mm figures. 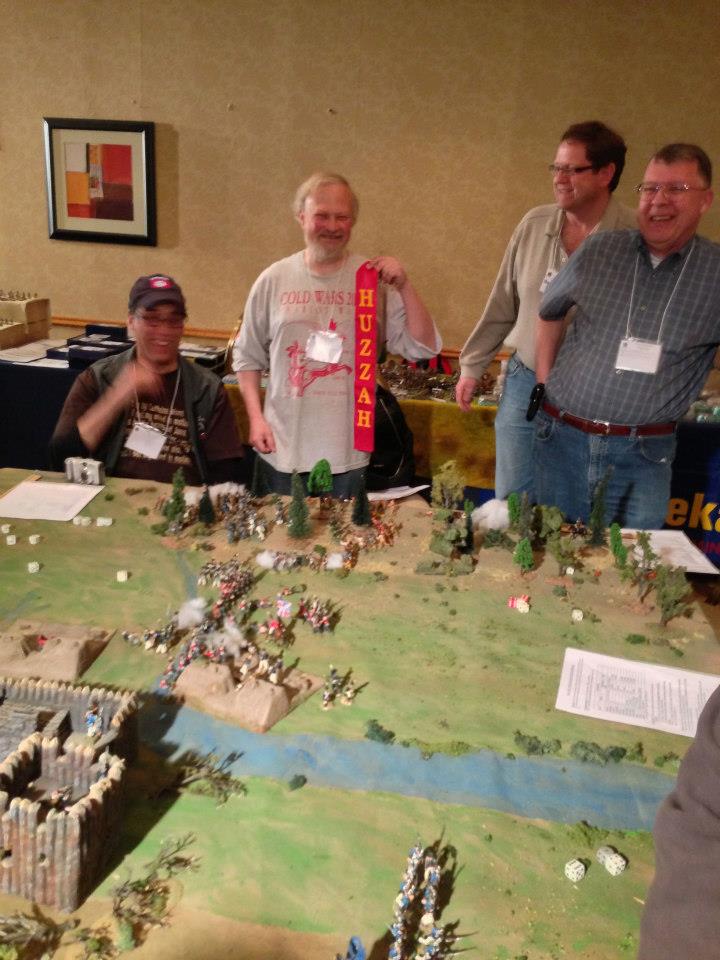 The game itself was hard fought and nearly turned into an American victory with all redoubts captured and 2 guns spiked  but a lone unit of Indians managed to buck the odds and throw the Elite company of Regulars out of the 3rd redoubt before the guns could be spiked and a large force of militia got trapped by Indians and mauled. The lines of retreat weren't blocked though and many of the militia would have  have made it to the fort so it was a better outcome for the Americans than the original battle even though not an outright win.

On Sunday morning I ran an impromptu re-run of the game since Jeff was signed into a HUGE 28mm Black Powder Leipzig. I ended up with one player, Scott, a long time member of the Yahoo LittleWar's goup . I teamed up with his young son, Niemy, who was a good reliable commander and excellent die roller and despite a bit too much enthusiastic chit chat about toy soldiers from the two older players,  he persevered and together we squeaked out a narrow US victory over his Dad and the Brits.

And there we are, all the welcome socializing and cross fertilization of ideas, gawking at what others are doing, buying of this and that and rolling of dice was done for another year.  All that remained was a drive back to New Brunswick, arriving as dusk turned to night, a good sleep, a feed of thick locally cured bacon and waffles swimming in real maple syrup and off home to make it a 1,000 km round trip.

Of course I was greeted by news that while I was gone, the septic backed up again, oh dear! Good thing there are Stout Hearts on the home front!  Another urgent chore for me, Home sweet home!

********
I almost forgot, most of the pictures come from the Huzzah blog
https://www.facebook.com/HuzzahCon/photos_stream

lots more good pictures there of the convention.