Its actually a coincidence that the 150th anniversary of the battle I'm not fighting is coming up on Wednesday. The reasons I am laying this particular battle out are that the terrain and situation/mission are simple, it could be made to fit on my table with out going to the cm scale, I had enough troops even if they are still a bit motley,  and especially that someone else had already done the hard work of maps, OB and victory conditions and all I had to do was translate from original F&F to Hearts of Tin. 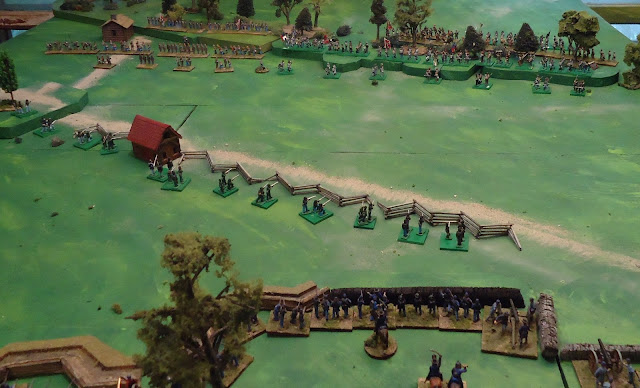 As the Confederate artillery falls silent, their infantry emerges from the trees and forms for the assault.

But why do an historically inspired game at all? Basically, I find no better way of getting a feel for a period or of testing a set of rules than to base a game on a real battle, preferably more than one battle done more than once.

It helps that in this case I've walked the real battle field so when I look at the simplified, artificial  terrain, stepped hills and all, I can picture what the real thing looks like and my mind can see some of the unspoken generalizations, compromises and assumptions that are behind the model battlefield, the rules and how troops are manoeuvred.   Last year I did a table top based on the area around my house and that also helped in the same way. This in turn helps me interpret a generic scenario layout and adjust to suit scale and place assuming I have a feel for both.

The real point being that this is my issue with my 40mm mid 19thC games, I don't have a feel for the ground yet or the compromises made because of the heightened conflict between figure size and ground scale and because the periods being considered include one (post ACW)  that I haven't delved into very deeply beyond colonial type skirmish and another Crimean/Mutiny/ACW that I have read about but not translated onto the table beyond the ACW and I havn't pinned down the fictional background properly yet. Interestingly I laid out a 40mm unit behind one of the 1/72nd ones. If I used 20mm troops in 2 ranks I could squeeze twice as many men into the same space but since most of my own 20's are based in a ragged 1 deep line, the units have the same frontage with the same number of figures and thanks to the base depth on my 1/72nd stands, almost the same depth. in other words, a very similar unit foot print. The small guys just look less crowded and the hills, trees and houses take up less room.

Today I am using a compressed scale so that 16 figures/4 stands are a small brigade but normally I use 12-16 figures as a small regiment. The difference is purely theoretical since the rules are not being modified to suit, the scale difference is being ignored. It does however my view of how the battle unfolds and what I should be able to do with them or how I should use them, only because of my mind set.

The decision as to what the same size units represents for the 40's is then largely a matter of what I am trying to represent and that, unfortunately, can only be a choice made by myself. So once the Reb's make their big charge across the valley and get cleared away, I'll need to break out some 40's regardless of uniforms and see how they feel. Maybe I'll even run the same scenario. Then I'll need to do some small battles and skirmishes at the other end, based on some real ones and see how they feel. Then'll I'll need to go away and think.

Lukcily while I'm thinking there is lots to do. I just got a used Schildkrot/Zinnbrigade mold of uhlans in plumed lancer cap as well as the parade dress marching Prussian that I have earmarked for the Oberhilse Council Guard. I also found this horse with its head down amongst the Merten figures, if I take one of those British Dragoon officers turn in the saddle and a lancer head and do a bit of work..... 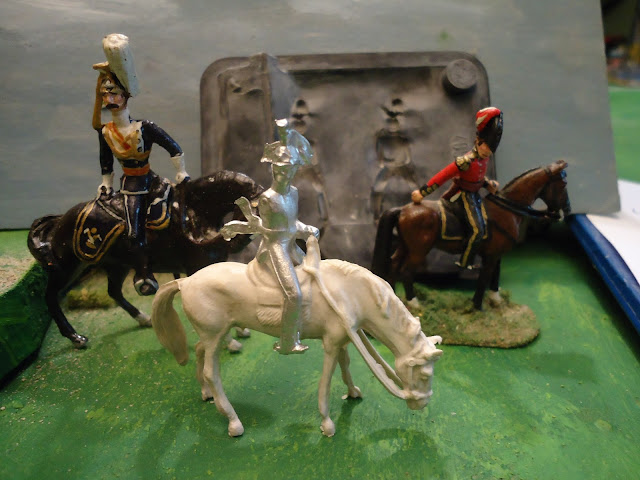 
But first I have a battle to fight.