The Battle of Newboyne (HofT Test)

Phew!  I didn't manage 2 games today but I did manage an average sort of Hearts of Tin (well, plastic really) game and its back to its old recognizable self. Not much different from the version before I started fiddling a week or 2 ago but I did manage to fine tune and tidy a bit while rescuing. Alas my camera still has not been seen since I put it aside when packing for Huzzah. Worse, my wife was off giving a seminar and had her camera with her leaving me with the really crappy one on my cellphone. Like they say, it doesn't matter how many pixels you have if you can't focus. Oh wait, that might have been me they were talking about. 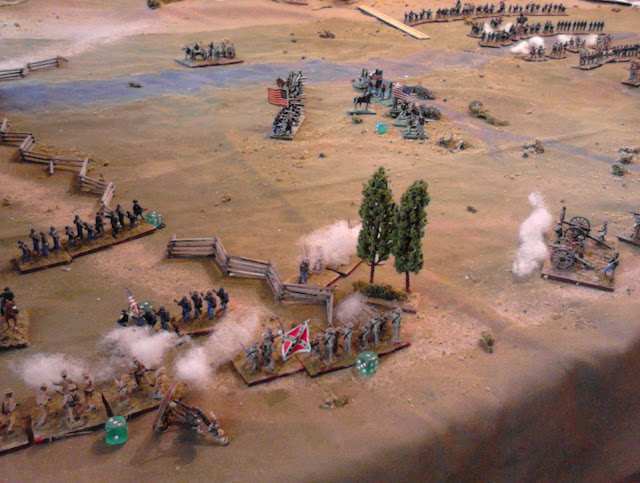 Brigadier Featherstone takes a bullet while trying to avert a crisis late in the game.

The game was Scenario 2 (Threat to the Flank) from Asquith & Grant's Scenarios for All Ages (The Red Book)  Briefly this scenario poses a river line defence where the enemy has sent a force up (or down) river to cross over a bridge and turn the position. I decided not to use any cavalry so substituted  more infantry and, since my Reb's are organized in 4 stand regiments while the Yanks are in 3 stand ones, I just multiplied the number of units by 4 then divided by the appropriate number  to get the number of units on each side and organized them into standard brigades. As luck would have it that worked out evenly and was enough for a healthy Division a side. I couldn't match the deployment ratios precisely without breaking brigade integrity but these sorts of things are only guidelines.

I deployed the Rebs with 1 brigade of 12 stands (3 x 4)  plus a 2 gun battery defending the town and ford and another 12 stand brigade in reserve. There was also a 12 stand brigade and battery marching to stop the flank attack along with a stray sharpshooter. The Yanks had 2 brigades (4x3) marching down a road to the bridge with a battery in company  and a similar force deployed ready to attack the ford once the flank attack had an effect.

It was tempting  to break the Union force into two small divisions but there just weren't enough regiments and brigades to justify  the extra orders dice and as it was, 1 die per side was ample to keep things rolling . I don't think there was a single turn when I didn't have enough order pips  but there were a few turns where I had to dig into the reserve being held by the ADC and eventually both sides exhausted this pool which they had built up early on. 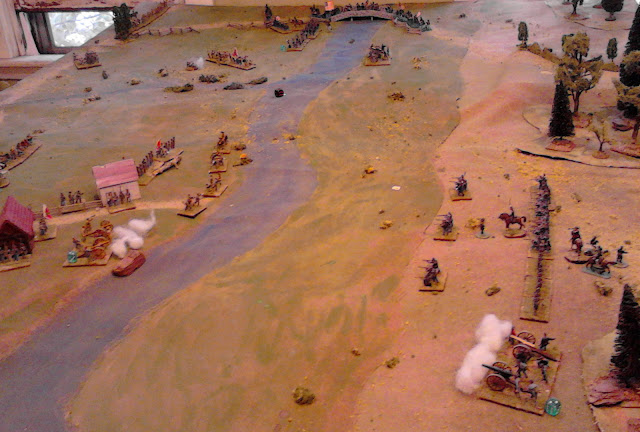 The start of Turn 3, just before things heat up.
An attempt by the Rebs to crush the Yankees before they could cross over and deploy went somewhat astray when one unit wandered too close to the Yankee battery across the river. The Yankee artillery were the stars of the day, silencing the battery near town on one side and cutting up  two reb regiments on the other flank. The fight by the bridge  bogged down into a firefight which lasted all game before the Reb's broke leaving their opponents too badly shot up and exhausted to move. From the Yankee perspective this was fine as it left them with 3 brigades vs 2.

Once the flank attack started to develop the Yankee Divison Commander sent skirmishers forward then followed up by 3 waves of infantry while the flanking force attacked at the same time. The flanking force was met head on by Kinch's Brigade and that fight went on till the end.To every one's surprise Reb skirmishers attempted to hold the river bank but they were just too thinly posted. The entrenched infantry on the hill did better but after a prolonged fight they were destroyed just before the Yankee morale broke. The Yankee commander then pulled back the first line and sent in the next two to clear out the buildings. Losses were heavy all around but in a battle of attrition with even losses, the smaller side was bound to lose. Featherstone's Brigade by the bridge and Sumbody's brigade in town went shaken on the same turn with the late Featherstone's men retreating off table leaving the road open.
j 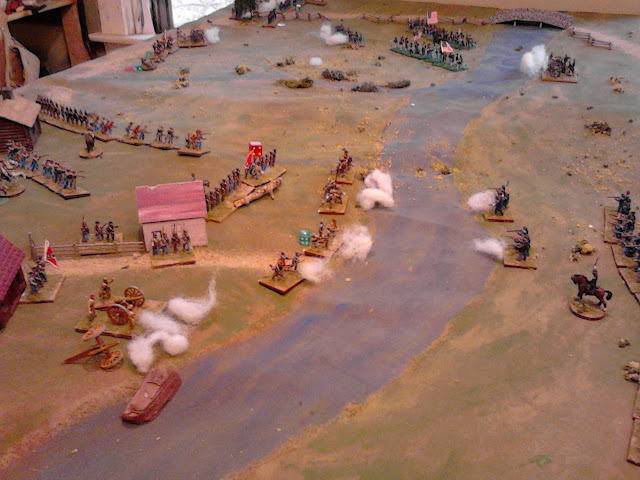 So that was the test game. A division a side, 9 brigades or 25 regiments (84 stands) + 8 guns in total and somewhere between 2 and 3 hours to reach a  conclusion. (there were a lot of   interruptions). I can't help but feel that a dedicated Confederate general might have put up a more imaginative defense but on the other hand Featherstone's Brigade almost won their fight early on which would have allowed them to intervene while Sumbody's Brigade almost repulsed the first Yankee Brigade to cross.

A close and enjoyable game and one which felt like a typical HofT game, and reminiscent of the early Morschauser Meets MacDuff games that got me hooked on this sort of fast playing game focussing  on battle plans and generic tactics instead of detail. I won't say it captured the feel of regimental tactics  but for me it felt enough like the way some battles read in ACW Division level memoirs to make me happy.

Next up the newly completed Oberhilse will take the field in a very similar situation. I just have to make a final decision on a look/feel for the later Atlantican campaigns so that I can settle on rules feel.