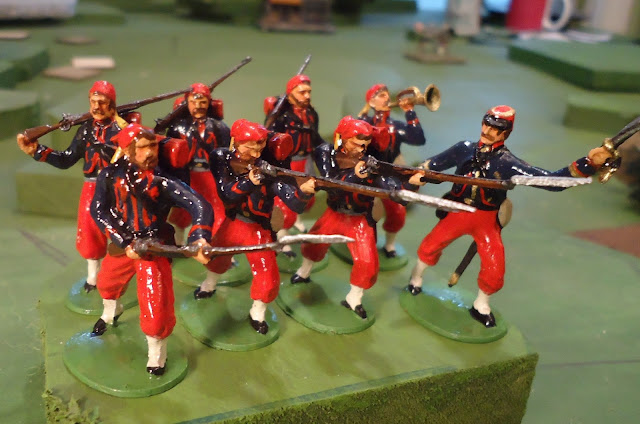 The first 1/2 battalion of Zouaves, ready for the field. I rather like the oval bases, and the effect of the simple glossy painting on the active poses. They are like a cross of the classic British metals, the active flare of German toy soldiers and something of the feel of the Crescent, Lone Star, Marx and Herald plastic figures of my childhood. The quintessential toy soldier. I am now officially a fan of Merten.

We declared a household holiday today, a break from the bustle of the last 3 weeks. I spent part of it finishing off the first group of Zouaves and editing the reversions of Hearts of Tin and trying to ensure the smooth integration of the new morale rule.  I'm still proof reading and pondering the need to go back and put proper tables in vs just doing a proper quick reference sheet. I also need to make a closer proof reading of the sample troop charts as well as adding some more. Luckily tomorrow is also mostly a day off and I expect to have a game on the table later this week.

The most notable change to Hearts of Tins is just a matter of language. Three years ago I rewrote them in a way that discouraged the use of single figures. I can't remember clearly why that was. Possibly to make the rules seem more like an integrated system than a jumble of rules and to help differentiate it from MacDuff which was not multi-figure stand friendly, maybe to encourage myself to make up my mind on elements vs figures as a basis for rules  but mostly I think to facilitate having Elite troops less susceptible  to losses from shooting since these are suppose to represent a reduction in cohesion rather than just a loss of men.  The language originally spoke of dice per Strength Points which became figures and then dice per "company". Putting it back to 1 per 4 figures instead of 1 per company looks different but works the same for average troops and makes it easy to go with either bases or figures or a mix of either. For small figures I'll go back to counting each base as a standard number of figures.

Apart from flexibility, the other main driver of change was the realization that the new morale test again made unit organization subject to cheesy tactics. The way the morale rule was phrased, a unit could not have a morale effect on a larger unit which was not an intended effect. I hit the same issue  with MacDuff and sort of got around it by using the 2 hits on a 6 rule. Still not satisfactory but it did alleviate the problem. I contemplated going the same route with Hearts of Tin but the dynamics are different and the effect of the extra hits can make fire way too powerful.

I made two drastic decisions that alleviate this problem in a different way and oddly enough these are both a reversion to the original version 10 years back. The first is to not sweat the details as long as the OVERALL outcome is what I want, the second is to go back to not removing units until all of the figures have been "hit" since theoretically, the last man fighting is still surrounded by the most of the unit who have ceased to fight effectively but are still physically present, apart from a percentage, say 15-25% of figures who have been "hit" who are actually killed or wounded or have wandered off. In theory this means "hit" figures and bases should be left on table but I like the emotional impact of knocking them down or taking them off and I'll continue to do so. Its a compromise I can live with.

Not all units will fight to the end in all situations though. It has always been my goal with my rules to differentiate between the less decisive long range fight and the decisive close range fight. In HofT this means that "shooting" is a matter of attrition only while "melee" which includes very close range firefights has the possibility of being "defeated". The morale check after some playing about is then used not to determine failure, that is determined by the combat, but to measure the degree of failure. This can be anything from a short setback to an eventual rout off the table. Oddly enough this is pretty much how the original rules worked until I started to try and make them better and more "detailed and realistic". (Yeah I know, now). The new version which presented itself when I was making up Rattle of Dice on the fly is I think better but it took a lot of dead alleys and long detours to get back so close. Its actually got one slight improvement over rattle of Dice in that a defeated unit has a chance to rally immediately and just fall back 4" in good order but that's minor.

I also dropped the roll to limit the number of orders from basic to optional rule. It can add an interesting element but only with optimal organizations, not necessarily the historically accurate ones. Rather than try to tweak it, I've just made it an option that can be used or not.

While I was laptop-less I belated noticed that the mobile version of the blog makes it difficult or impossible to see the side bar and the same is probably true of blog readers. I'm still thinking about this but if you can't download from the side bar, here is a link to the Hearts of Tin rules, the date will always indicate when it was last edited. 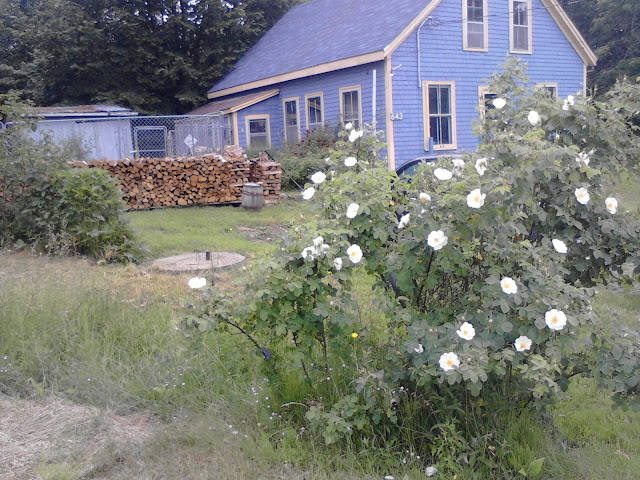 Lastly, just to show we're not just about the soldiers, the spring flowers have largely faded and yesterday's rain beat up the poor poppies but today two of our rose bushes have started to bloom and the rest are no far behind. Must be summer. 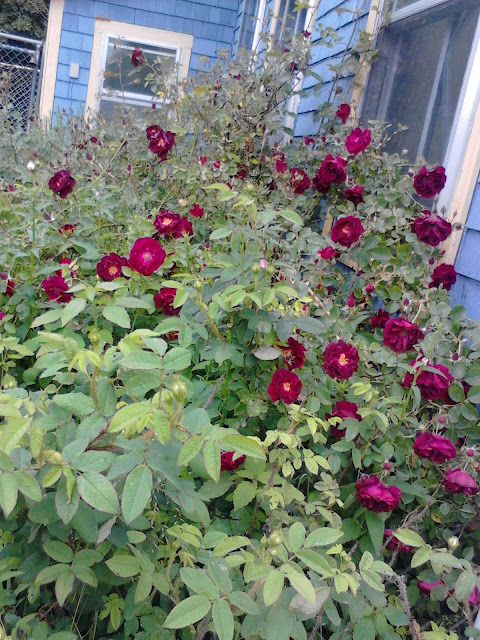