Tramp tramp the boys are marching 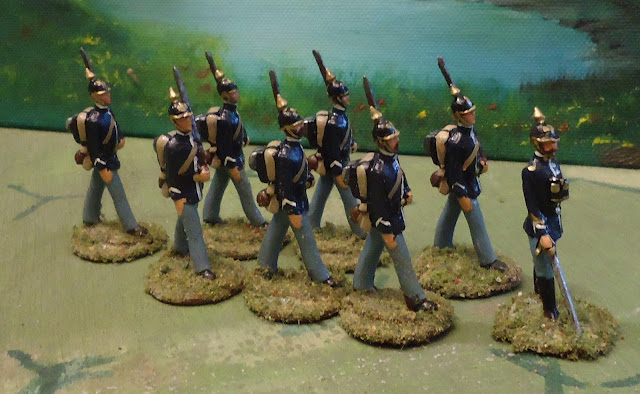 The first detachment of the newly formed Oberhilse 6th Infantry marches into camp.

Progress is being made, and on several fronts!

You would think that since this is my imaginary army, I could dress it any way I chose, but no, after 5 years, it has its own character. The nice uniform with light blue facings, Austrian knots and white pant strips just looked too Faraway-ish, not Oberhilsian at all. At look at ACW uniforms suggested either light blue cuffs or light blue piping, either of which would also fit the Blue's army plain approach to uniforms but shouldn't I try to talk them into something showier?  I decided to consult one of the most authoritarian books on the subject that I have, Andrew Rose's Illustrated guide to Toy Soldiers. A careful perusal made it clear that it was extremely rare for toy soldiers to have both facings and piping on their cuff and collar. A bit of experimentation confirmed that I prefer the piping to solid, unpiped cuffs so piping it was, but white for better contrast. The result can be seen above and to my mind it looks quite Oberhilsian, simple, practical, economical to produce and serviceable in the field. Just the sort of thing the Elder Council would approve. I also happen to like it so all's well.

Since I was unsure on rules and organization I did 8 figures out of the 10 I cast up. The decision is now made, after much thought,  to do a special set of rules for this project with no consideration given to their use for anything else. Having thought more on the question of command, illusion, flavour and game feel and since there is no longer a question of compatibility with the War of 1812 or any real history for that matter, I've decided to go with the 20 man units that I tried out for the Battle of Plattsburg and have been hovering around ever since. Hopefully I'll have time to cast up 12 more figures  on the weekend, then I can paint up the fife and drum band that's been waiting. 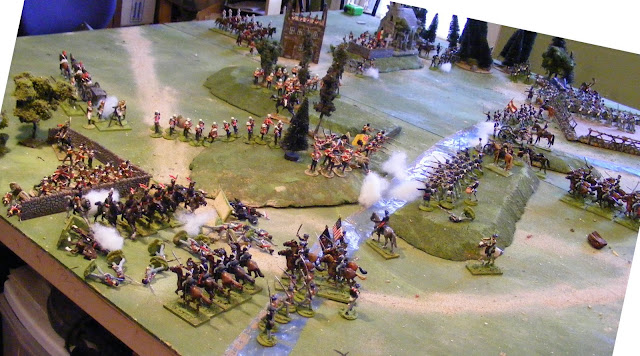 A shot of the Plattsburg battle from 2011.

Rules wise, I was tempted to use either MacDuff or Hearts of Tin but found myself thinking about tinkering and finding a bit of tension between the 40mm Atlantican Wars and the contemporary 1/72nd ACW on one hand and the War of 1812 on the other. Doing a separate purpose built set using existing mechanisms put together for this sole purpose and this organization etc  just seems to make sense now. Briefly it will see a PIP system for command but normally only 1 General per side. Brigadiers will have the sole purpose of allowing 2 units to move on 1 order. The question of fiddling will be answered partly by the Pips and partly by an extended ZOC (by any other name). Once within 12" of the enemy, actions will be limited meaning so troops will easily be committed and getting them out will be harder than committing fresh, unengaged troops from reserve.

For those unfamiliar with the reference in the title, I was not able to find a copy of the Oberhilsian version of this famous American Civil War song but here is one adapted for Canadians marching to repulse the Fenians.