It was a penguin  really that got me thinking about questions of illusion again.

This isn't a penguin obviously, it's a Classic Comic and one of my all time favorite publications as well as one of the most highly  influential ones when I was young. Picture from http://www.classicscentral.com/

A Penguin Classics paperback translation of Caesar is what got me thinking.  I was leafing through Civil War and reading his account of issuing orders to his army at Pharsalus and impressing on his reserve that they were not to attack until the red flag was shown and then through The Conquest of Gaul, in particular his account of the battle of the Sambre in which he writes about rushing about the field, rallying troops, ordering subordinates to move their Legion to join the next one and form a giant square and so on.

All in all it sounded so much like a WRG 3rd edition Ancients battle from the '70's (no accident I'm sure) that my thoughts turned first to Command & Control in wargames and then to a vague idea about  the "feel" of a wargame, the impression and experience that it gives a player rather than how it simulates the battle itself.
I think the first post in which I started to explore this was Oh for a Muse of Fire in July 2010 while I was convalescing. I didn't deal with command control mechanisms then but I see now that it is part of it. 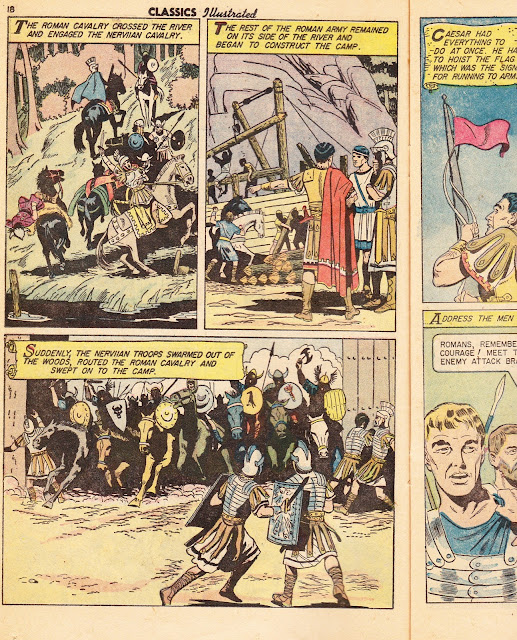 This comic is the main reason that only Elastolin and Marx Romans look like the real thing to me, and why their Vikings are the only "real" Gallic and Germanic "Barbarians" !

The old WRG orders may not have been an accurate recreation of how an ancient army was commanded but it was an interesting and enjoyable if occasionally problematic (if abused) game mechanic and more importantly, it tricked you into feeling like you were commanding an army. For that matter, despite the 1"=10 paces and 1 figure = 20 men scales and armies of maybe 200 figures or 4,000 men, you did feel like it was an army. The same is true of Charge! games where there are only half a dozen regiments on the table. Its an illusion, a clever and effective one. A sleight of mind if you will. I wish I had a clear view of a formula to be applied when designing rules so as to get that effect, alas I only get fleeting glimpses and then my mind clouds over.

Looking at just the command control aspects, I found myself pondering again on just how things happened.  Obviously it varies with the time, resources and custom and on the size of the armies. Controlling a multi-corps army in the 1860's is a very different proposition from controlling a Brigade or even a Division. I was fascinated and briefly inspired by reading Grant and especially Sherman's memoirs but it didn't take long to realize that I had no real ambition to try to recreate the experience (and would probably suck at it).   Most of their jobs was an exercise in politics and bureaucracy or corporate management. They created the plan and gave direction to senior officers and then sat back trying to figure out what was happening and knowing that much of the battle would be so far away that they wouldn't hear until that night. Not the sort of hands on toy soldier game I'm looking for.

The role of a Brigade or Division commander  in a big battle is quite different but not really any better. Generally they have been told what, where, when and often how to do it and their job is to execute. The edge to edge wall of toy soldiers isn't so far out for a slice of a big battle where there are other active commands on either side of the player. I have experienced just such a situation a couple of times in big multi-player games on long tables with large forces. It can be fun but its more about being a competent   tactician than a brilliant general.

All of which explains why I favour small campaigns such as the War of 1812,  or Napier's Conquest of the Scinde. Wolfe at Quebec only had 3 brigades but the fate of a continent was in his hands (OK that's hype, they could have come back the next year) . The decisions were his and the results immediate, just like on a typical wargames table.  However,  the real general still wasn't handling the individual companies and battalions and things didn't happen instantly and couldn't be undone or changed instantly.

I have tried to acknowledge and reflect this at various times in the past, for example with written game orders , but never successfully.  Instead I usually focussed too much on how the orders get carried out, the battalion drill and so on.  I did get around to looking at it in June of 2011 (see Time & Space) but the effects were short lived. The trick is to remove  the temptation to fiddle and micro-manage while acknowledging the important role of competent subordinates but also keeping  the player engaged, unless of course its a skirmish and command is being exercised by yelling.

One of my issues with many command and control systems is that they are too hit and miss and exaggerate the odds of outright disobedience and incompetence by at least 10 fold if not 100 fold BUT, they also tend to make it too easy to change your mind. For example, if a group of unit's gets a no move result, instead of heading off late next turn if not stopped, the player is free to give them a completely different order on the next turn. The triple move in Black Powder is a step in the right direction here.

Why not just go back to written orders? Well, basically because 1/2 the fun is trying to mislead and outwit your opponent and its too hard to do when you are he. I think I was headed in the right direction 2 years ago but it needs some more thought in light of current gaming plans and some other aspects of that illusion I seek. 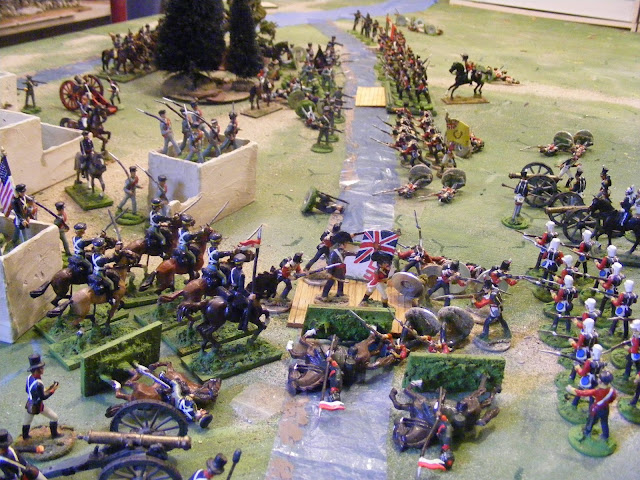 A gratuitous shot from the Rosie's Cantina game in June of 2011 which tested some  thoughts on the command and control effects of long moves.