At last I got to play my test game. Even better, it played like a charm. I forgot to stop for tea and nearly forgot to take any pictures.

Once again the game was Scenario 1 from Programmed Scenarios. Since it was a new grid and new rules I rerolled the attacker's instructions and got an attack on the left. Rather than write about the game it self and incidents like the valiant charge of Larson's Lancers who saved the position on the hill at the cost of 1/2 their number, I'll just write a bit about some of the rule choices I made when tweaking the Square Brigadier in the light of the last month's reading, discussions, mucking about on the table and thinking, and about how it all worked in practice 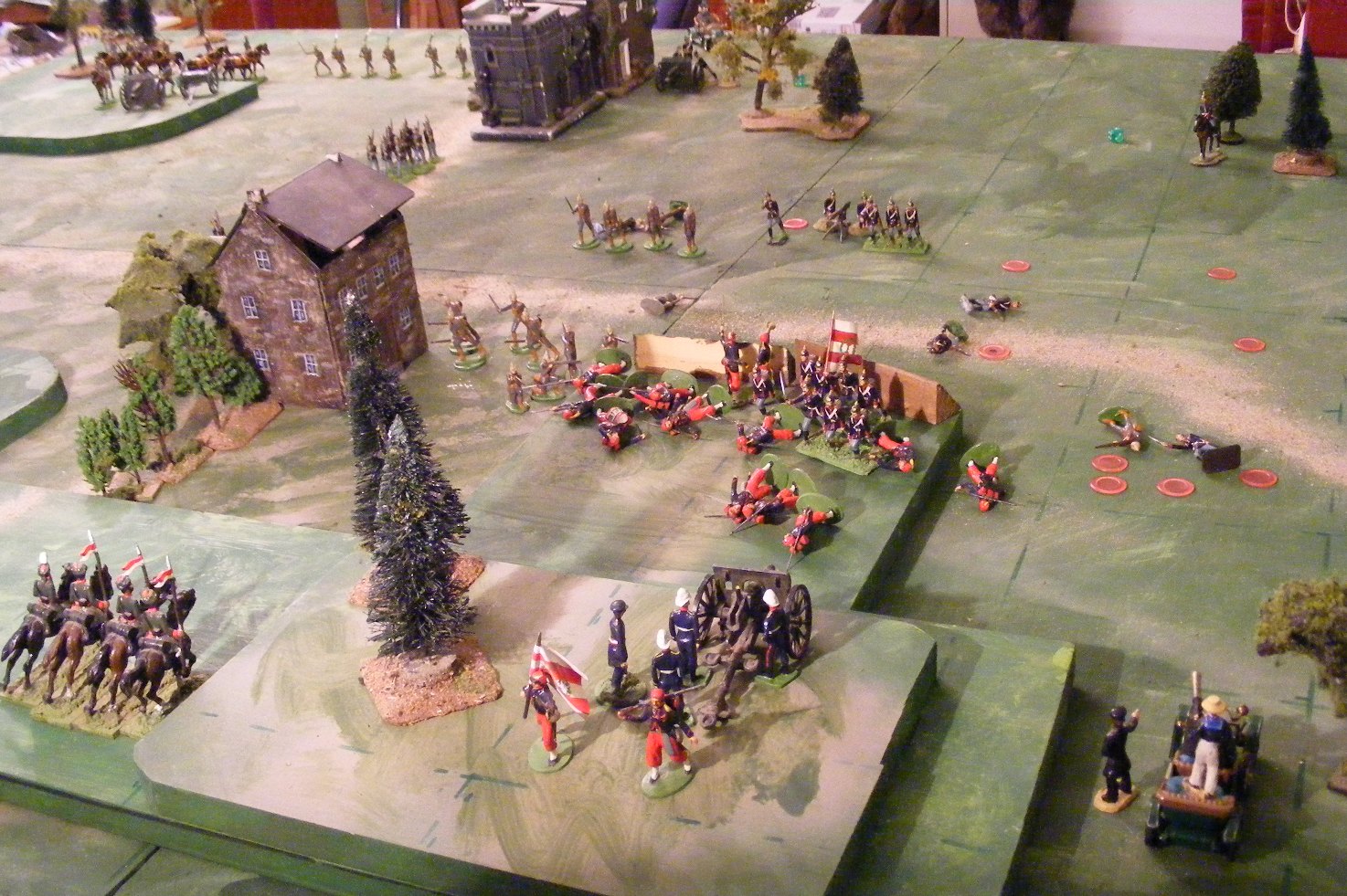 Orders. I've been trying to tweak the orders system for ages trying to make it easy to administer with a mix of choice and chance and just the right balance between not being able to do enough almost all the time and almost never being able to do enough. Its always been close but not quite right (hence the tweaking) but this variation which came out of my subconsious the other day worked just the way I envisaged it since day 1. Essentially I started the game with 1d6 of orders pre-rolled for each Brigadier and General. Instead of having a staff to hold orders, I allowed  all commanders to store unused orders but never to have more than 6 available. The catch is only Generals roll for more during a game,not Brigadiers. So the player is faced with choices, even if he starts with lots he can't squander them as replacements might come slowly, however,  if the existing orders and early replacements are channeled to the important points and some reserve kept, an attack can be launched. If there is an opening and can be pushed in otherwise ic can be left to engage in a firefight without need for orders which can then be used to push reserves forward and maybe rally units pulled out of the line while a new reserve of orders is built up for the next push. A long range bombardment also takes up orders so if there is going to be one, best hold the infantry back until just the right moment.

Unit Integrity. Using fixed units with fixed capabilities makes game design much easier which is why I initially borrowed it from Richard Borg's Battlecry. However, there are also difficulties, especially when doing historical games as units were not quite so fixed. I struggled with letting go of them since it made it so easy to do things like cover and special unit capabilities. However, the protracted pondering and small test games were in large part aimed at finding another way. I'm happy to say that once I stopped trying to limit myself to 4 man companies stuffed into 3" or 4" squares, stopped copying Battlecry, and stopped treating the toy soldiers as an "element", a new old method came fairly easily. I didn't end up even testing the Charge! inspired set draft but I held onto the idea of counting noses and added a decision to not force units to stay within a single square. Instead the unit may break into detachments like it could have years ago when playing a MacDuff game. Orders and combat results are now based on the contents of a square as an adhoc unit while maintaining a 50% battalion morale rule to avoid what appears to be a fight to the death. It was hard work getting my head there but it worked like a charm, The game had both a new feel and and old school feel at the same time, something familiar but also a bit of me. .

But that's enough for tonight. (and anyway the 1st Episode of Outlander will be on in a few minutes. Hope it doesn't have me breaking out 40mm Jacobites tomorrow)