The Wisdom of the Young

At the end of last week's post on early 20thC rules , I dropped in  a last minute comment about OS rules and player morale vs unit morale. It wasn't a planned comment that I had thought on, it seemed to come straight from my subconscious to the keyboard. Once aired however, it got me thinking and it got/me digging through my library. Not through history books but through wargaming books and it got me thinking again about morale but more on that in a later post.

One of the early additions to my wargaming library was the Knight's Battles for Wargamers book on Bull Run. I don't have it anymore alas, loaned to a non-wargaming friend that had expressed an interest but who I lost touch with. I do however have the Alma one and it appears that they all have the same introduction by Brigadier Young. He wrote various interesting and useful things in the introduction but there were two that are particularly relevant. One was his comment that:

"elaborate Morale rules are a waste of time. Morale is in the mind of the wargamer himself, for ultimately a war game is a duel between the two opposing generals themselves. Do not let them hide their deficiencies behind the alleged failings of their metal or plastic followers!"

The other occurred while discussing the range of battles that the series aimed to cover. He mentioned that he would like to see it expanded to cover some modern battles but that "...... it is not a bad idea when refighting these modern actions to fight them with the troops and the rules of the Napoleonic Age......." . This is indeed what Lawford & Young did in their book Charge! where the classic Battle of Sinttingbad was apparently inspired by the Battle of Sitang Bridge in Burma. I'm not going to suddenly decide to fight WW1 with my War of 1812 figures but it has given me ideas about the various late 19thC toy soldiers that I have or that I want to paint but haven't been able to figure out what to do with once painted.


As my WWI German "army" grows, I've been thinking about the opposition. For various reasons, despite the existence of a purchase option, my conclusion is that I HAVE to sculpt and cast Highlanders and British line infantry. Its now been 2 years since my last successful sculpt and mold project and even then the mold was so so. There has been some sculpting of masters, some of which I was ok with but the last mould was a complete bust. I could really use a successful mold but if so, I need to justify the cost and effort by casting more than a dozen figures. That encourages planning for a bigger game.

I know that the sculpting and casting is going to take me more than a weekend and I can't start the war proper until the figures are cast and then painted but if I pay some heed to the Brigadier's advice and field some colourful figures, in red or blue, to brighten the table, I now have enough troops for a small test  of an alternate OSW style game which is where this started with a test game in 2011 . 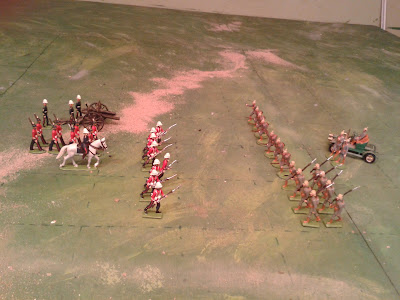