A few days ago I decided I had time for a quick game. Flipping open OHW, I found myself looking at Scenario 22: Ambush. Six Red units poised to attack 1 Blue unit in a town.

Except Red isn't allowed to attack the town. Blue has 3 more units in the woods ready to attack. For 3 turns no Red unit may move or shoot and after that they are allowed to shoot at the town but can't assault it. OK, why not? I suspect one isn't supposed to ask why not but I hate games that don't look "right" so I postulated that perhaps the town was protected by a high wall and a wet ditch, not very War of 1812 ish. Perhaps Fort MacDuff? Sounded like work, then my eye fell on my New Orleans redoubt from Barzso and suddenly I "HAD" to haul out the pirates which in turn meant leaving the War of 1812 for Atlantica. By the time I was set up my hour was long gone so I took a picture and left it.

Over night I started wondering why Red couldn't react for three turns, not even in self defence. The  only thing I could think of was a dawn assault on a sleeping camp. When I scraped up an hour it took five minutes to fold some paper tents and I was ready to go. Some chance of waking and reacting seemed reasonable but I decided to play it straight up except with my rules. 15 minutes later Red was routed and the game was over. Not terribly satisfying but a large part of that was with the rules.

It had been bothering me  that despite some period rules,  formed 1812 or 1830's line battalions seem to be either as flexible  as skirmishing 1900 infantry deployed in companies or as very brittle. I experimented with various things and managed to stretch the game to 5 turns but in the end, the only thing that seems to work right is to just make them stronger so that they can ignore occasional hits when they are fresh. I'll test that this weekend but I'm also going to allow Red to attempt to wake guys up once the shooting starts.

I unexpectedly found an hour this evening to play. The increase in number of hits made all the difference. All I ended up doing for reaction was to allow units that were fired on or meleed to shoot before the 4th turn. It looked pretty close at times but Blue had some terrible dice and Red pulled 3 chance cards in their favour including a rally. At the end, Red had 4 units only 1 or 2 hits from breaking and had lost 3 Commanders but they had only lost 2 units out of 10 on Turn Nine when Blue broke after losing 4 units.  Blue's biggest error was probably committing the Brethren light infantry to close combat with massed battalions of regulars. I should also note that some of the combats got a bit confusing and I trotted out some extra rules for things like multi unit column assaults etc which aren't in the quick summary.

As for the scenario, although there were some tense moments during the combats, there was so little room to manouver and too few options to make it a really interesting game. For a dimilar situation I'd go back to the Grant Attack on a Camp scenario, always an engaging game if slightly longer and more complex. 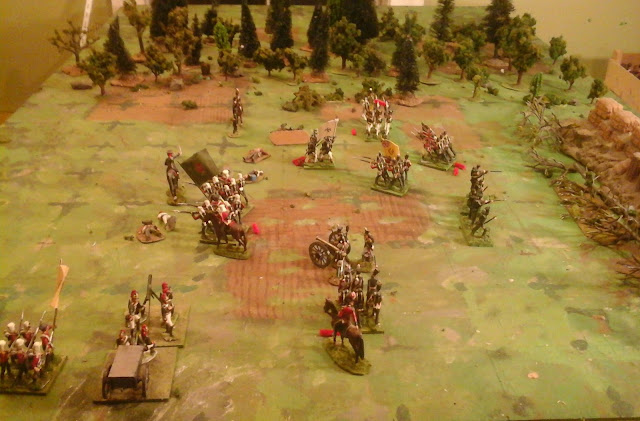 Email ThisBlogThis!Share to TwitterShare to FacebookShare to Pinterest
Labels: onehour