On Saturday I met with some of the lads at the King's County Table Top Games Assn Quarterly games day in Kentville.

This was another 25mm ECW game, this one was based on Marston Moor using a rough ratio of 1:100 for over all numbers but using standard units in OSW mode. The players were not confined to historical deployments. Jeff as Prince Rupert deployed first with the Allied army under Paul and Martin deploying second. 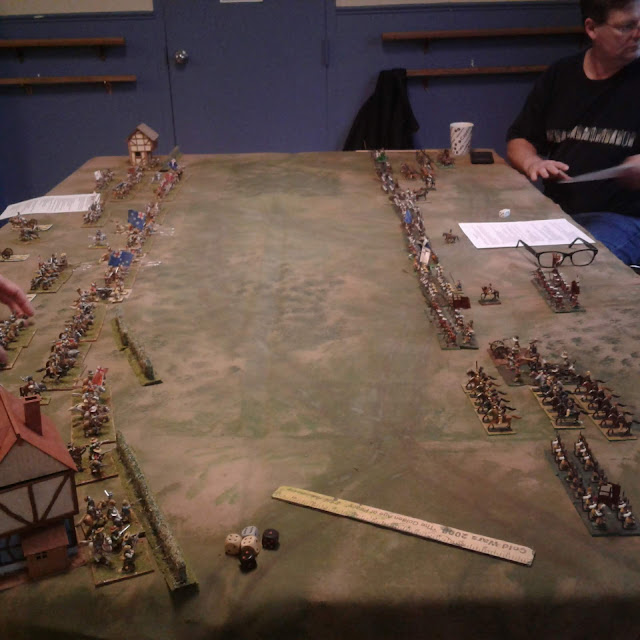 This was the third outing for my one page, Quick Play, low detail ECW rules. Over all the rules again worked ok thanks to players with the right spirit but there were a few new glitches and "not covered" bits. In addition my suspicion during the last game that I shouldn't have removed the melee resolution rule was confirmed. I also got some useful feed back on a few bits. We're only talking a few lines of text but that'll take me onto  the other side of the page so I may as well fill up the remaining space by adding more explanation and making some of the writing down some of the unwritten rules.


The allies attacked slowly forward all along the line but Jeff did a Rupert and launched a strong cavalry counter attack on his right. This swept away the allied cavalry and then sacrificed itself knocking a whole in the flanking infantry. It was close though, they almost crushed the whole flank without being destroyed.

On the other flank, Martin found his cavalry hampered by a village and close and the resulting cavalry fight lasted the rest of the game without decisive result.

In the centre, the largely Scottish infantry mass attacked about as slowly as is possible rolling 2 d6 a turn for distance! This gave the Royalist guns time to do enough damage to make a difference in the following melee. 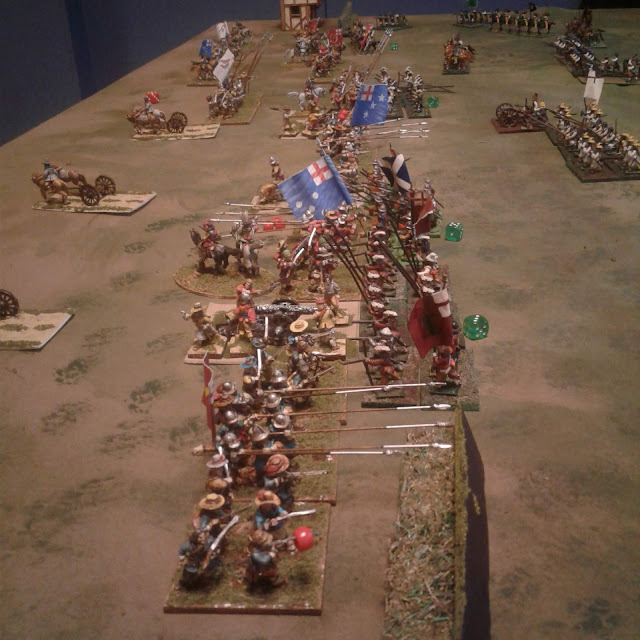 However, by this time, the Allied army had managed to lose all of but one of their commanders which was made coordination nearly impossible. Both armies had taken heavy losses but there seemed little hope of Parliament breaking the Royalist line and in case of a draw, the strategic advantage lay with the Royalists. They certainly did better than they did in history.

Thanks to Jeff, Paul, and Martin for an enjoyable game.
Posted by Ross Mac rmacfa@gmail.com