Here is the latest Irish unit to join the Rebel camp, a unit of Pioneers/Sappers calling themselves "McAlpine's Fusiliers".

I was torn between sticking with the plan of simple Britain's style toy soldiers in neat and tidy uniforms or a more realistic Ragged Reb look with battered slouch hats and blanket rolls using my "looks like Imrie Risley copies to me" moulds and no two figures dressed the same but in the end I decided to stay on track.

I turned to the Miniature Moulds copy of a British Guards Pioneer with a head swap. One figure swapped his axe for an Airfix shovel and another was given a rifle to remind folks that  these pioneers are armed and can fight. I also included an Engineer who is marching with the men instead of reading  a map or similar. 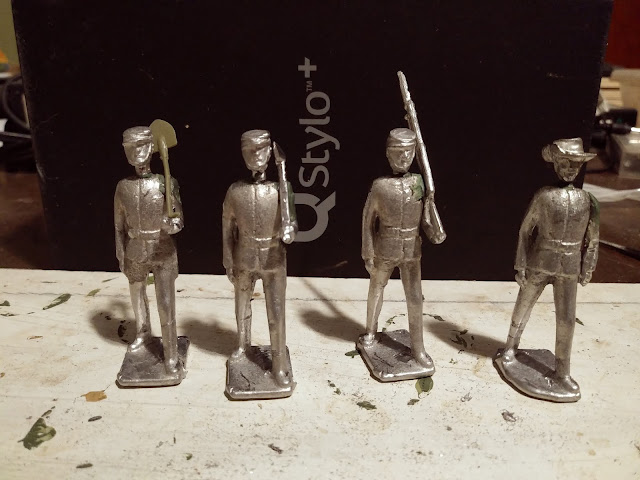 Originally I intended to base them on two bases each with two figures like I have done with Irregular sharpshooters but since the Sappers fight like infantry when not undertaking specialist chores like building or blowing up bridges, I decided to base the three sappers like infantry with the engineering officer mounted separately as a character. 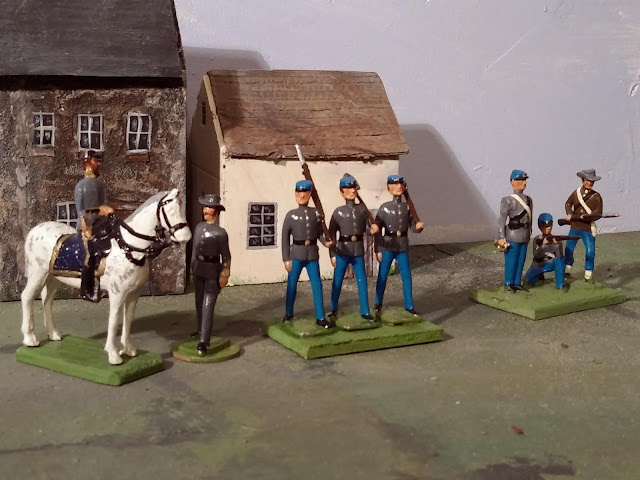 The original McAlpine's Fusiliers were, of course, not a military unit but merely a sarcastic nickname for Irish navies working for Sir Robert McAlpine's company on various construction projects in England. Hard work, poor pay and living conditions but better than nothing. Mine will live a life of luxury in comparison, especially since I roll dice instead of shooting at my toy soldiers.