The Battle of Windy Corner

Before I start, I thought it best to reiterate the main principle for my collection of figures, and admit to two personal quirks that I have accepted despite the added difficulties they raise.

The principle is simple: every portion of my wargaming collection should provide a different wargaming experience rather than being "the same thing with different hats". 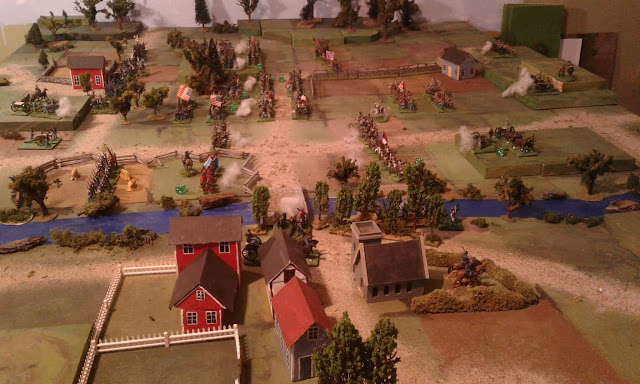 The main quirk is that while having different styles of rules for each period, I am strongly drawn to using variations of the same basic rules, partly because they are easier to remember when I start flitting from period to period, and partly because if properly done, it can reflect the differences and similarities between periods while reminding one of the evolutionary nature of warfare.

The other quirk has no rationale. Since high school days if not earlier, I hate being trendy or worse, appearing to be so!
So, I decided that it was time to put the 54's away for a few days to give someone else some exercise and the choice fell on the ACW lads.  The last ACW game (click) I had played was yet another attempt to go from regiments to brigades as basic units. I've played my share  of the original Fire & Fury as well as Volley & Bayonet, and have a copy of On To Richmond but, well, writing my own has been part of wargaming since the beginning.


The rules I wrote up in July were non-gridded with Brigade sized units so I set the game up ignoring the grid consciously but subconsciously making the terrain conform. The game started well but after about the 10th time I had to circumnavigate the table to search for the tape measure I had put down...somewhere......, I decided that the grid wasn't so bad and could be used to measure distances in 6" increments, measuring by the stand and not worrying about forcing units to conform to the grid.

That actually worked quite well for a couple of turns but did it really feel like these units were brigades and I was a division or corps commander?  Do I really know enough to know if the feel was right? What I did know was that some of the colour and period, not to mention "toy soldier feel" is lost when a famous regiment becomes just one or two of the stands in a unit.

OK, at last, on to the battle!
(with apologies for the fuzzy pictures, a technical issue which is under investigation) 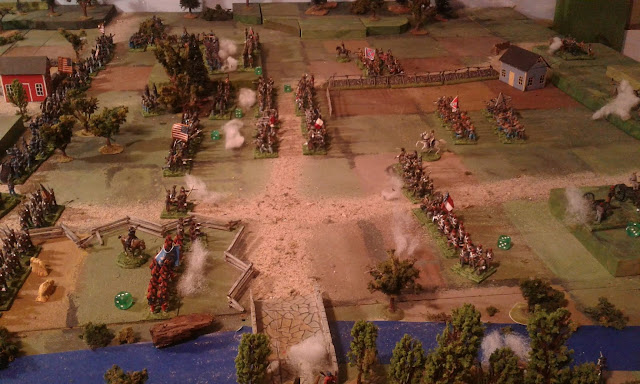 The Union army was cursed with a wood, a hill and a farm right in their path in a way that made it hard to deploy but they were blessed with a wood and a hill for their advance guard to hold while General Smith decided where to commit the rear brigade. 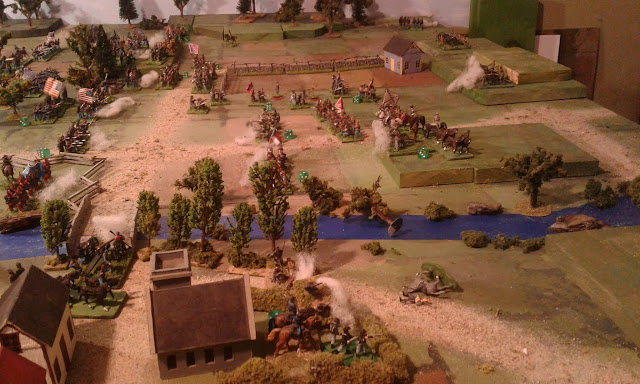 General Kinch's force came on in a fairly concentrated formation in open ground with hills at the back for his artillery. He lost no time in throwing his brigades forward in a massed attack hoping to crunch the Union line before their whole army could deploy. As the troops advanced, the word came down to reorganize the Division from 8 stand brigade units into 4 stand regiments which was swiftly done without confusion and the battle went on. 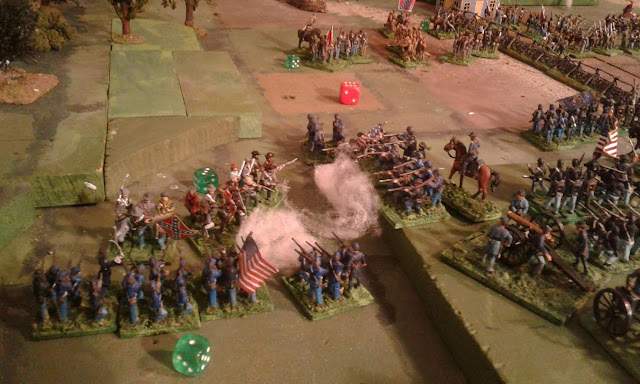 The Rebel attack hit the Union line hard but the close range fire of the Union guns and the good defensive terrain helped the Blue line to hold. A lengthy close range firefight ensued but as reinforcements arrived to plug gaps and extend the line, threatening the Rebel flanks, the attack faltered and suddenly the Grey line gave way.

It took a little time for Smith to get his division reformed and ready for a counter attack but eventually the Blue lines moved forward.

.That time was enough for the Confederate lines to reform and the Union troops were reluctant to risk a charge. A prolonged firefight ensued but the  Rebels had suffered heavy losses in their earlier charge  and in the end Kinch was forced to order a retreat while he still had a viable Division. (i.e. He hit his army morale loss point.) 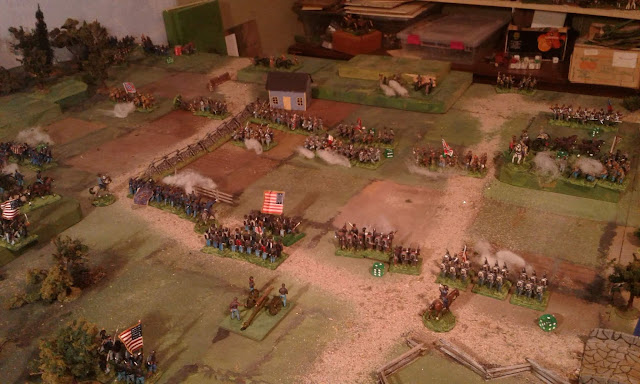 The game from there moved quickly and eventually reached a clear but never inevitable conclusion in what seemed like half an hour but which appears to have actually been more than three hours by the clock.

I fielded about 600 figures without crowding the table so there is room for some of the unused units as well as some additions.

Using a "regiment as unit" set of rules, I'll never be able to fit any of the larger historical battles on my  table without extreme bathtubbing but that wasn't one of my serious ambitions anyway.

This setup finally ticks all my boxes so the plan for the fall/winter is to turn the loose collection of stands into permanent, 4 stand, identifiable, named and marked regiments, each with their own good flag, as planned in 2010. Then I have to make sure I have enough brigadiers and that they all have names to help with developing narratives and possibly a campaign at some future time. Once that is done I can turn my attention to organizing the mess of painted cavalry and then, finally,  paint up some more of the figures who have been idling in the cupboard for much of the last decade.

Oh, and I have to turn my quickly scribbled notes into a proper, comprehensive set of rules along the way.
Posted by Ross Mac rmacfa@gmail.com