Having decided that, on the whole,  I did prefer slightly fewer but slightly larger units, I've started to upsize the few companies/troops that were never painted to the 6 inf/4 cav standard.  One of these was the Rebel Black Horse. I didn't feel like breaking out my casting pot for one head and I didn't want these rebel horsemen to look too regular anyway, so I looked in the Bin of Heads and pulled out a kepi to put on one of the few remaining spare Crimean Hussars. 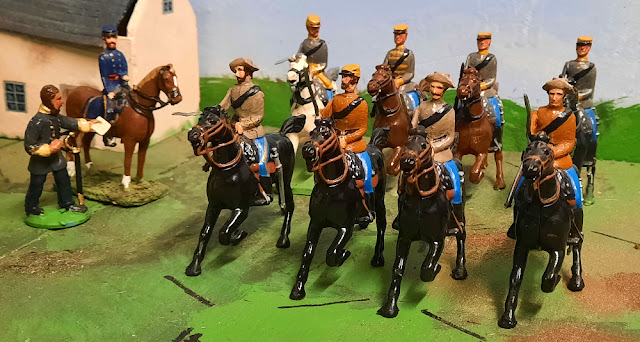 I had had great plans for an outdoor game this weekend. The Boss is  off to a dogshow (finally-its been a lonngg Covid ...) , so I'm in charge of the 2 remaining young puppies as well as the rest of the crew. The forecast had been promising for putting the 2 young'uns in the 6 foot chainlink exercise yard I made for them in the front yard, quite near to the scene of last July 4th's battlefield which would allow me to play and monitor.

Alas!.... Weather! Frailty is thy name!  Its been pouring most of the day with promises of more to come over the rest of the long weekend so I'll have to get the table cleared and then set up over the next day or so and then play a game inside while the pups are napping. (Humphrey is going through an Indiana Jones phase and has been teaching himself how to scale a wire exercise pen that is twice his "stand on 2 legs" height so I need to keep a close watch on him when he's not napping in the smaller pen which has a lid. )

So, it may be smaller and without the panoramic view, but a game will go on before the weekend is over!