They Came On In The Old Way

At last! The urgent chores are done and I had time to reflect on the various aborted or dismissed games over the last week or more, and my various attempts to "fix" the rules. At last I recognized two dangerous traits that were supposed to have been banished but have been sabotaging my efforts.

To over simplify things, one of those meant that my stated goal, to have simple rules that reflected the results of the opposing general's skill and judgement rather than the minutiae of unit tactics and so on, kept reverting to fiddly bits, tactical formations, drills, etc.. This was due in part to subconscious 70's influences reflecting making me want to show "how" something was done rather than just showing "what" was the result was of the attempt to carry out orders. It was when I was introduced to Joe Morschauser's book by Rob Dean around 2001/2(ish) that this alternate approach first grabbed my serious attention.

Another obstacle was an inherited, or at least, an early ingrained, trait of being cautious and avoiding risk. A little bit of randomness was OK but predictability with only a little variation was better, regardless of how boring it was. So I often hedged my bets, avoiding extreme variations in possible combat results and so on. I blame my early exposure to those old WRG 3rd ed  Ancients rules where the difference between two average dice were used to reduce variation and casualties were inflicted in gradients of 1/20th of a figure!   At 18, it made Charge! or Featherstone look improbably, and worrisome-ly, wild and unpredictable! (Which was the point I suspect, given those authors experience.) 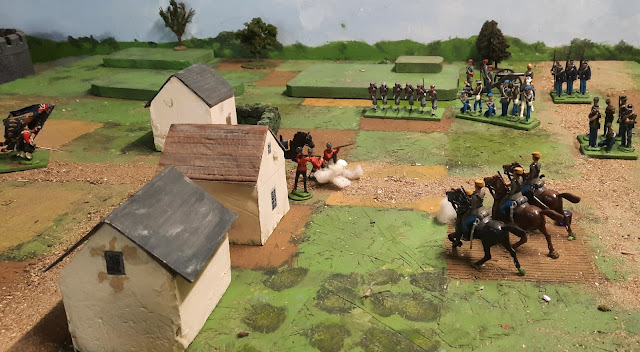 Anyway, having stripped out many or at least 'tuned' most of the rules that had been making some games, dull and indecisive, I had a most enjoyable, and occasionally nail biting, game today. It was one of those games where the pace was quick and the player choices at least as important than the dice, and the advantage swayed back and forth until victory was confirmed on the last throw of the dice on the bottom end of the 15th turn of a 15 turn game.