Hurry Up and Wait

The plan for today was to finish painting my proto-Mamluke but suddenly things came together to make it a good day for casting, so ..... 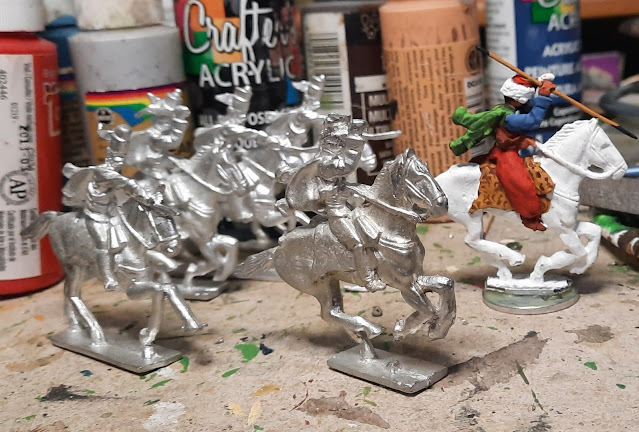 With a bit of work, I finally got one of the slashing pose with a full length sabre. The other chap, whose horse is now rearing will either beg a sabre hand from somewhere else or get a lance. One of the galloping swordsmen who had a short sabre is going to end up firing a pistol.

I also did some test figures while I was at it.

I hunted down my lancer and gave the mould a good wash and scrub. To my surprise I didn't need a big struggle to get a decent casting. I also had another go at a cowboy shooting a rifle while galloping, but its not quite there yet. Size and pose wise, the figure will mix well with the lancer and  Prussian hussar to make a second unit of Mamluke cavalry. I found my old Turk mould and it still works, though with a little extra flash, so there's another potential unit. The new Grenz  figure is there  for conversion to Albanian infantry, one day.

But first I have to finish the first Mamluke and then his new friends.