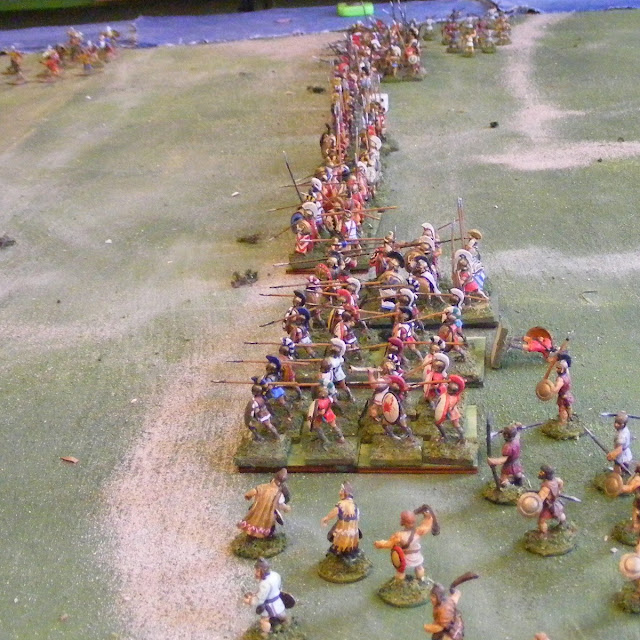 The Greek advance into the beaten zone begins

On Friday I got a chance for a solo run through of Harry Pearson's Marathon scenario, published in Batllegames Issue 1, using Harry's rules which were published in the same issue. After some debate I decided to stick with 3 Greek units deployed 4 deep on each flank and 5 units deployed 2 deep in the center. To minimize the risk of being outflanked, I anchored the Greek right on the sea with a unit of javelins in support, deployed the slingers to the left of the line, but held the 3rd light unit to deal with breakthroughs (or at least be a speed bump). Te Persians were deployed with their best troops in the center, Immortals flanked by Persians, Saka and some Carian hoplites, and the weakest units on the flanks.

For those (shame on you!) who don't have the magazine, I'll give a brief outline using my own terminology. The rules adopt standard unit sizes and assign each unit a number of attack dice (6 for hopltes ranging down to 2 for skirmishers) and a defence factor (18 for hoplites ranging down to 12 for skirmishers and tribal levies) which is an assesment of  combined morale, armour and mass of each unit type. This is the lowest score that will make a die roll a hit. there are a few modifiers to the number of dice to be rolled, +1 die for charging etc. When a unit takes 6 hits or if it loses a melee by 4 hits more than it inflicted then a  unit is destroyed with possible consequences for nearby friends.

The game began with both sides advancing, the Greeks to cross the beaten zone as quickly as possible, the Persians to come into range and to give themselves room to fall back if needed.  By the end of the 2nd turn the Persian light infantry archers were in range and opened up on the hoplites. 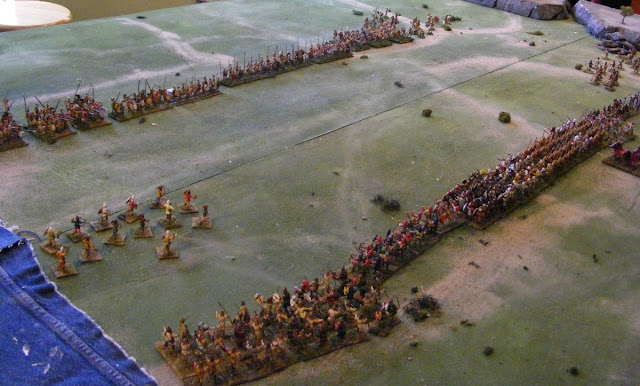 The Persian slingers open up.

I had pondered holding the Greek center back but as the arrows began to rain down, I realized that the Persian attack factor with bow was the same as their close combat factor but with no chance for the Greeks to retaliate. It was time to do or die and all units pressed forward at full speed.

Once the Persian battle line was in range and busy shooting, they had command points left over to start trying to get some auxiliaries and light troops around the open Greek left flank. At this point, the Greek lights did stirling work with sling and javelin and shot the archers to pieces, the routing archers carrying away a few other tribesmen with them .

The skirmishing Persian archers get the worst of it.

As hoplite casualties mounted, I began to worry about them being able to survive long enough to get into combat, then I belatedly remembered the steadying effect of the Greek commanders. Each can cancel 1 hit per game, just enough to get the phalanx through the beaten zone intact, more or less. As the hoplites entered close range, they broke into a run and then charged.  Only one battered unit hung back (failed charge morale roll). Combat was general along the line with some expected and some unexpected results. 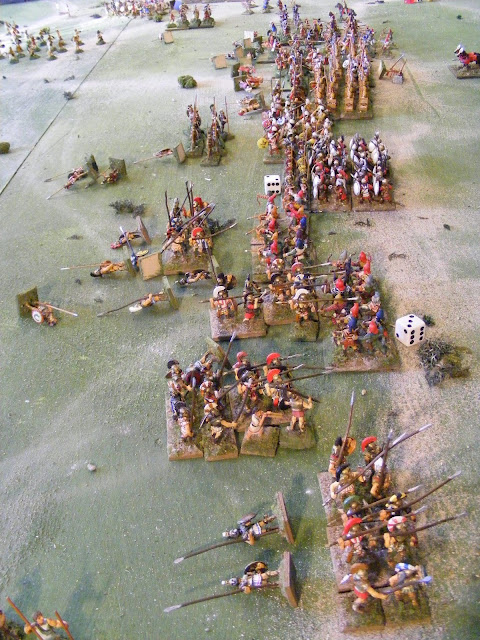 The veteran Scythian archers hold their own, and I mean veteran, most of them have over 25 years service and the hard core nearly 35 years!

On the right the Greeks swept away the Bythnian levies but were held by the Scythian archers and Carian hoplites. One poor phalanx was even driven back by the fierce Scythians (so many dice, so few hits). Towards the center, the Persians were able to destroy the battered unit which had stalled and then wheeled to assist the Carians. 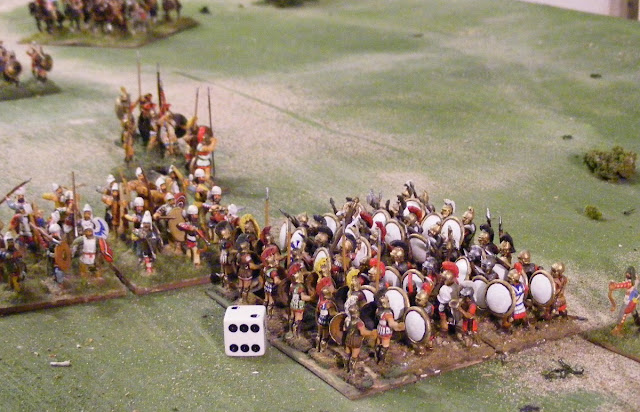 Crisis on the Greek right.

Things looked bleak for the Greeks but in the center, the Immortals were quickly destroyed in a flurry of high die rolls though taking a Greek unit with them. Their flight was deadly to surrounding unit's morale. On the far right, the Greeks eventually managed to drive off the remaining Scythians, and the Greeks in the center shrugged off the flank attack and pushed both units back!  (The Persians rolled 10 d12 for their flank charge, the Carians rolled 6, all needing to roll 18 or higher to hit and not one hit! ) A rout soon followed. So what about the Greek left? 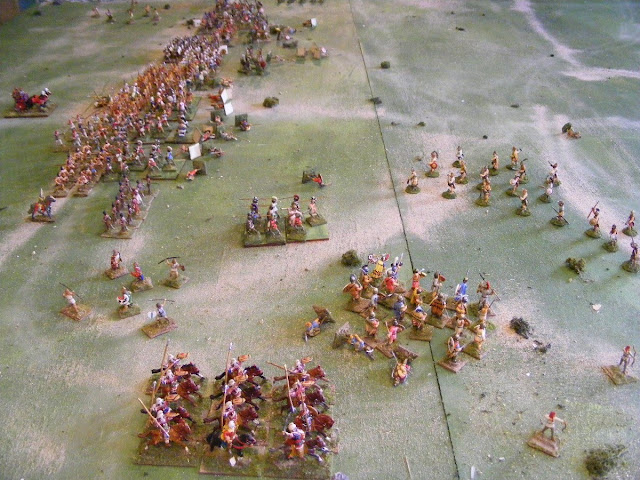 As the main battlelines clashed, the Persian right, supported by a newly  arrived cavalry unit, worked its way around the Greek flank forcing the Plateans to eventually turn and face them.  The Greek lights pressed forward, routing the remaining Persian lights then turning their slings and javelins on the auxiliaries and cavalry. As the 2 sides circled to line up for a charge the cavalry finally had an opening  but stung by their casualties, they refused the order.

At this point, the game looked like a fairly decisive Greek victory but I suddenly realized that there was no Army Morale, no turn limit and no victory conditions. Since I hadn't really seen the cavalry at work, and with 2 units now on the table, I decided to carry on. Then the Scythian Horse Archers arrived and with deadly aim, began destroying tired Greek hoplite units while skipping nimbly back out of reach. Once again the game hung in the balance.

The Greek right and center reforms and braces itself.

Again the Greek lights proved their worth, rushing forward they began to return fire on the horse archers while 1 unit covered the Plateans. The hoplite line reformed at right angles and began to slowly push the Scythians back against the sea. At last the White Cap cavalry, despite more hits, summoned the courage to charge. The javelineers nimbly ran back and the Hoplites braced themselves. The shock sent them back a pace or 2 but the line steadied and soon the cavalry was streaming back, carrying the remaining Persians with them. 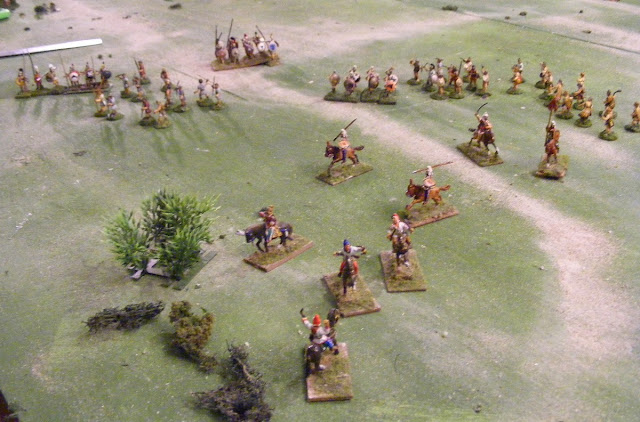 The rules worked smoothly and did a good job of capturing the flavour of the Greek and Persian Wars. It was interesting to use units with single based figures for a set of rules which doesn't count noses, but it worked well. Technically casualties aren't removed but I found it easier to knock over figures than track hits on a die. Both methods can be seen in use in the pictures. It is odd how small differences  can affect the feel of the game. While the rules worked well, I am so accustomed to d6 and inches that I found that the use of d20 and cm felt awkward.  You'd never know that Canada  went metric when I was a wee lad!

Next up: A report on 2nd Marathon, the game refought using Warhammer Ancient Battles.