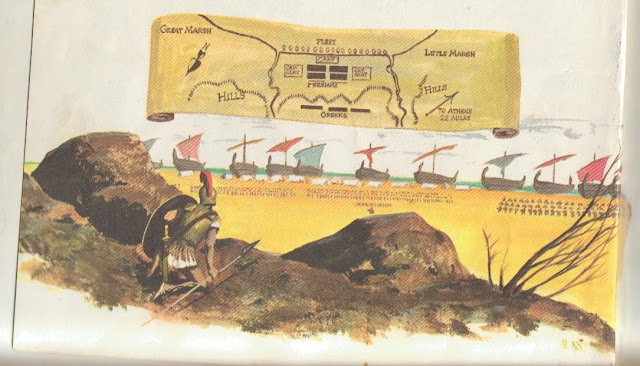 As long as I am going to refight Marathon at long last, I figured I'd best go back to my earliest source on the battle for a refresher. Herod-who? no no I'm talking about: 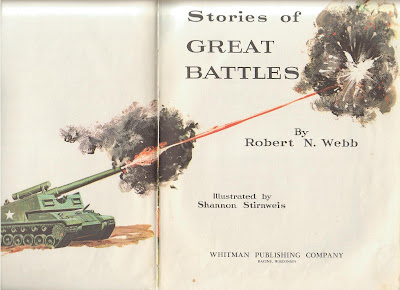 Published in 1960, not long before I got it, this illustrated book covered  8 battles, Marathon, Chalons, Hastings, Saratoga, Waterloo, Gettysburg, Belleau Wood and Omaha Beach. I doubt if a week went by in the following 10 years that I didn't flip through it at least once. It is perhaps no co-incidence that I have painted figures for and gamed some aspect of each of these campaigns at some point. I hadn't reread it in a very long time but dug it out yesterday and had a look. Not surprisingly for a book written near the peak of the Cold War, it stresses the threat to an "end of Western civilization" but over all does a surprisingly good portrayal of the armies and battle.

OK so the Persians are rather over estimated at 100,000 men and the rather Ali Baba-ish Persians with curved scimiters aren't quite right but it describes the strategic setting and issues then presents a phalanx of  heavily armoured men closing quickly against a larger army of less well armoured men whose strength was archers and cavalry. It even describes the Persians breaking through the weak centre then being crushed by the victorious wings. Not bad for a kid's book. Tomorrow I start reviewing the troops on hand and will report back in a few days. For some reason I can hear Billy Bob Thorton's voice in my head "We're going to  need more men".
(All images in this post are taken from this book. It can still be found on line at used book dealers and is recommended especially as a gift for a young  potential recruit. In case you can't read the scan above the book is Stories of Great Battles by Robert N. Webb, illustrated by Shannon Stirnweis, published by Whitman Publishing Co in 1960.)