This is the first play through of the Battle Stations from Wargamers Digest, December 1974. Please refer to the earlier post for set up and details. 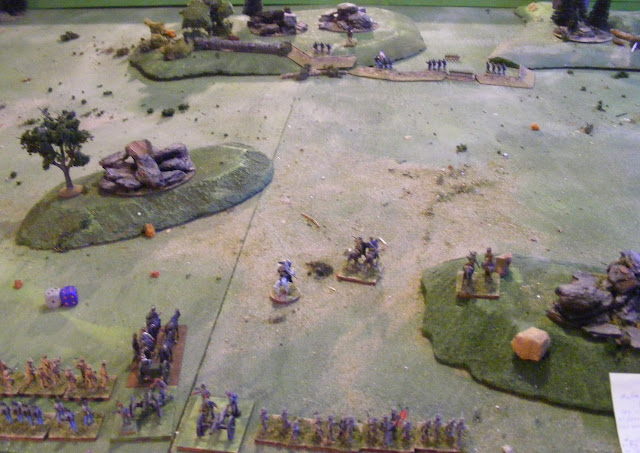 Overview of the battlefield before the game.
Having considered the various rules to be used, I ended up adding 50% to the distances in the scenario. This still isn't a precise translation but its as close as I can get without modifying move distances and ranges. After assessing the situation, I decided to deploy the foot artillery and 1 regiment of infantry as a pinning force while the cavalry went on a wide flanking movement on the left. The 2nd regiment I ordered to move left and assault the corner of the enemy hill supported by the horse artillery and the 3rd regiment. (I can't believe that I haven't named any of these regiments yet!) 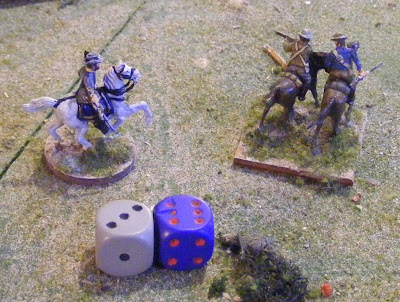 Turn 1, the blue and the grey toss for initiative. 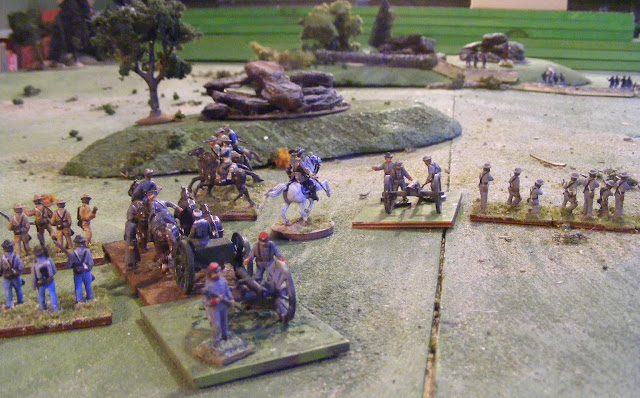 The flanking move begins aided by a Russian limber.
The game started smoothly, the Yankees hunkered down behind their breastworks (built for my 15mm ACW and pressed into service) while the Rebs marched off smartly. (a bit of a relief actually having no command control test or variable move dice - UhOh!) On turn 2 the Reb foot artillery galloped forward and unlimbered on the flank of their infantry supports.  I decided that it was time to roll for the strength of the Yankee defenders (remember, this wasn't specified in the original article, only the black and white picture provided any guidance) and ended up with 3 regiments of infantry and no artillery support. I deployed 1 regiment hidden on the wooded hill on the right of the Federal position and the 3rd in reserve in dead ground behind the hill. The Federal commander had won both initiative rolls thus far and chosen to move second each time, this gave him the right to fire first (at least according to how Don explained it when laying out the rules as opposed to what is described during the example game). The regiment had 4 stands and thus had 2 dice of fire. The range was 16", over 1 foot but less than 2 feet so 2 was deducted from  each dice resulting in 1 hit on the infantry. First blood! The gun then fired needing 3 or better, a 2 was duly rolled, a miss. Now I turned to the Rebel infantry and only just remembered that it was fire OR move and they had moved so, no return fire. 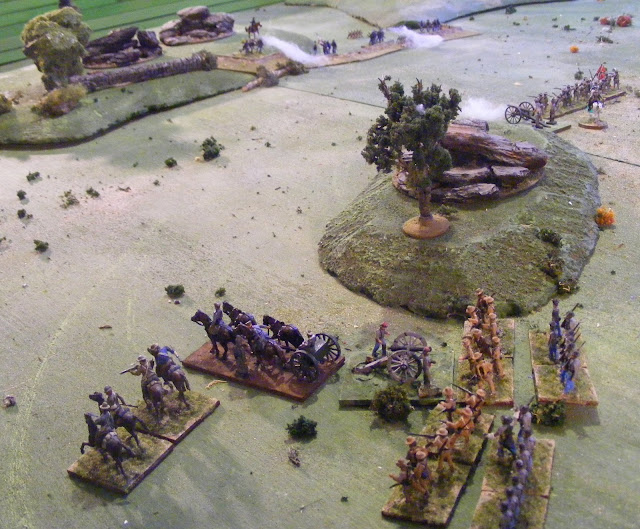 The ball commences.
There seemed no reason to alter the plan on either side so the next turn rolled on with the Confederate pinning force standing and trading fire at long range while the flanking move continued. On turn 4 the Rebs won the initiative roll and forced the Yankees to go first, seemed like a good idea since they had a chance to knock a stand off the enemy thus reducing his fire but the Federals also had hidden infantry and I decided that these could not be fired at until they moved or fired or someone moved within 6". So, the cavalry moved around the hill, the horse artillery unlimbered and looked for targets and the infantry advanced. The pinning force opened up but both gun and infantry whiffed! Seizing the moment the 2nd regiment of infantry stood up and opened fire. 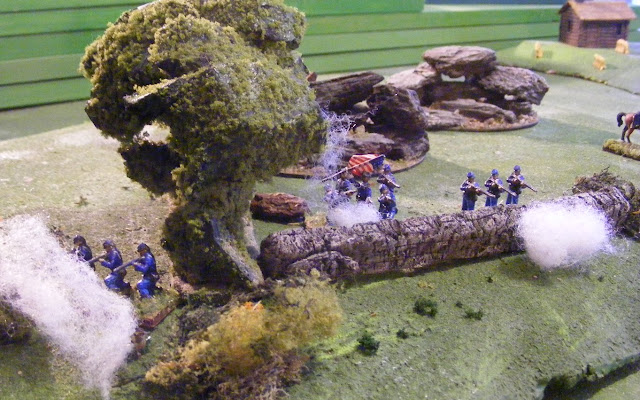 Surprise!
This began a lengthy fire fight with a slow trickle of casualties, thanks in part to some fickle dice. The odds of assaulting the hill didn't look comforting so I decided to see what effect the cavalry flanking attack would have. With my other hat on, I split the reserve, moving 2 stands to face the cavalry  while the other 2 moved to the breastwork to thicken the defenses. The cavalry drew sabers and charged (more out of curiosity about the melee rules then anything else, dismounting and opening fire would probably have been wiser even though not covered under the rules). The infantry leveled their rifles and fired with -1 for range and x1/2 for cavalry resulting in the loss of 1 cavalryman. In the melee then, the cavalry rolled 2 dice, subtracting 1 from each die for attacking uphill then halving for effect, inflicted 1 hit. The infantry on the other hand rolled 1 die after halving inflicted 2 points or 1 cavalryman, and I removed a stand. (In retrospect, I had given each cavalry stand the offensive power of 4 men so should have either allowed each to take 4 hits or have treated the 4 men as 1 stand, oops) This left 1 stand or 2 cavalry facing 2 stands or 7 infantry, I rolled the morale dice while I debated whether to multiple by stands, figures or melee points. The cavalry rolled a 2, the infantry 6, making it a moot point, the cavalry turned and retreated. . 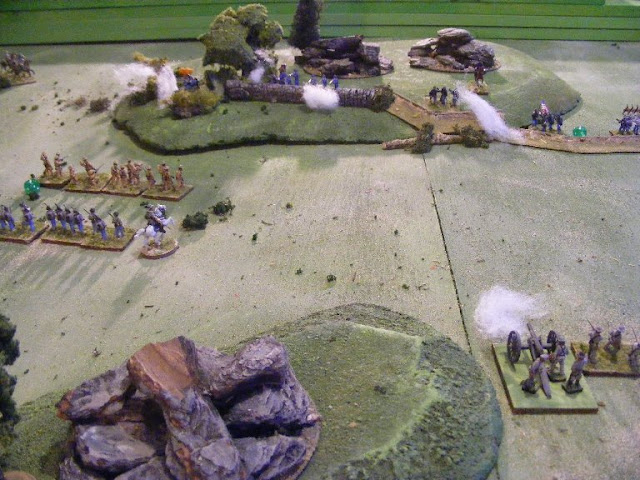 (ok this is 2 turns before the cavalry melee, in the heat of action I think I reloaded the camera with several rounds without firing a shot...)
. .
The cavalry rallied at the first opportunity but declined the opportunity to make a 2nd attempt. The fire fight was starting to wear down both sides as each fed in replacements. The holding force thought it saw an opening and surged forward but when the artillery missed, their (ie my) nerve failed and they halted on the next turn and opened fire at point blank range. So far the entrenchments had given the Yankees just enough of an edge that they would have won the firefight if it wasn't for the Confederate artillery. One more round of fire saw two of their regiments reduced to a single stand. With a rebel yell, the grey regiment swarmed over the breastwork taking out the last defender. I decide to use the rally test to check morale on the remnants of the other 2 regiments upon seeing this and both fell back 1/2 a move and rallied. With only 3 stands between the 2 regiments, it was time to go home. 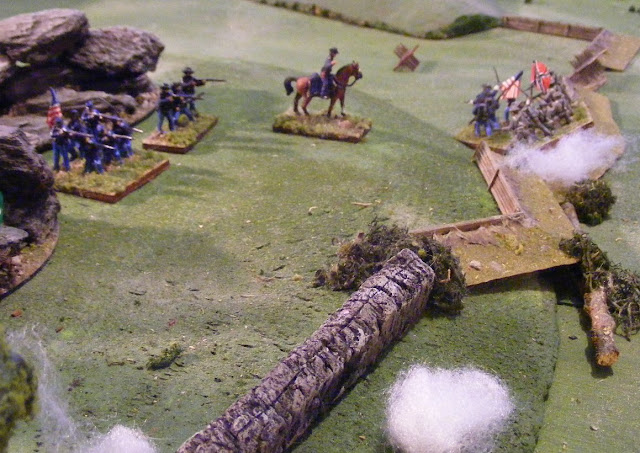 The Yankees falling back in good order.
The last defender has been put back in place for dramatic effect. .
And so ended an enjoyable little affair. It took me about an hour to play through about 10 turns and once again, a severely stripped down set of rules seemed to provide a better game than many, if not most, more complex ones. Obviously there are a lot of things not covered by the rules. Even leaving aside things not relevant to the scenario like engineering, there were no  rules for formation or direction changes, passage of lines, detailed weapon variations, troop quality etc,  but most of what was missing, wasn't missed!  Instead of worrying about such details, the focus was on the plan and basic tactics and worked. A cavalry assault uphill on rifled armed infantry was easily repulsed, an attack on entrenched infantry only worked because of artillery support and a flank attack which split the defenders at a crucial point. A successful assault on the position might have worked but it would have been a gamble and it was easier to stall and trade fire. In other words, the game felt right.

To my surprise, I didn't miss the command control restrictions or my variable moves either. The long moves and unpredictable, sometimes severe combat results gave sufficient unpredictability to keep things interesting and made reserves not only useful but necessary. (oddly the same is true of Charge! and the original Morschauser rules but is not true of many newer or more complex rules).

Not only that, but, if you are wondering what the scrap of paper visible in the lower right hand corner of the 1st picture  is? Its the entire rules hand chicken-scratched onto 2 post-it notes. Next best thing to a postcard! 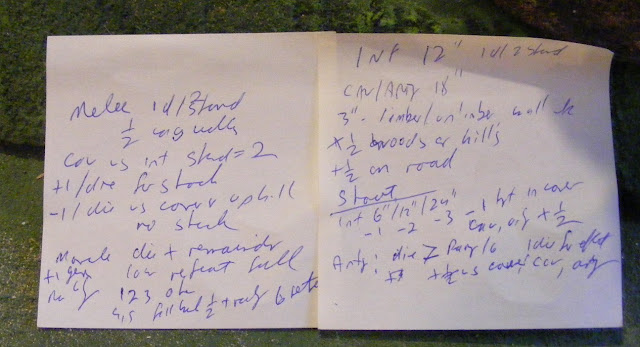 Rules on a post-it. Admittedly scrawled in abbreviated form.
My enthusiasm for breaking out the copy of Black Powder has waned even farther but it is the rule set Jerry & I have selected for an upcoming occasional campaign so I will persevere.  The 3rd game is more up inthe air, Morschauser, straight up as planned, the early Morschauser Meets MacDuff variant or the latest Hearts of Tin? The game is short enough that I could try them all and F&F as well but there is something mystical about 3 so we'll see.

Oh and the solution you ask? 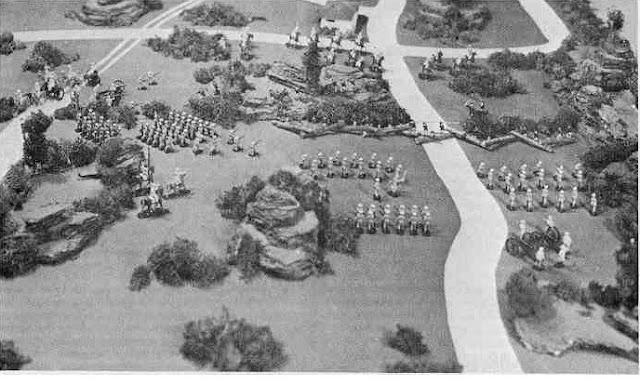 Nope, I didn't cheat, but all those years of training must have sunk in.
Picture from WD Dec 1974
Posted by Ross Mac rmacfa@gmail.com