The Scots go to town and Charge their Pikes

On Sunday I took a short break from the hectic last days before completing the sale of our old house to participate in a test game of Charge Pikes! by Wesley Rogers.  I had a small mixed brigade of my Scots Royalists in one corner and was constantly interrupted by urgent non-wargaming business so I can't really report usefully on the whole game but I took a few cellphone snaps of my Scots having their biggest success in decades. 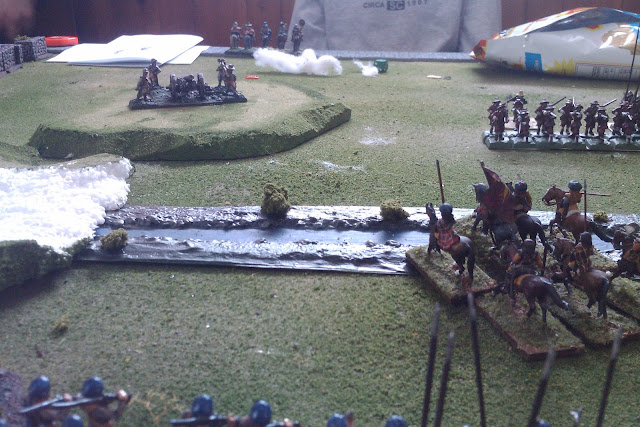 This first shot shows the remains of 2 regiments of English Parliamentry cavalry riding for the table edge in the distance. One unit was beaten by my Gordon Horse in a straight up fight, the other had been launched in a frontal  attack on the Strathcona Foote to see how the rules worked. They worked well for the pike and shot formation, not so well for the cavalry who rallied back into the path of the pursuing lancers. 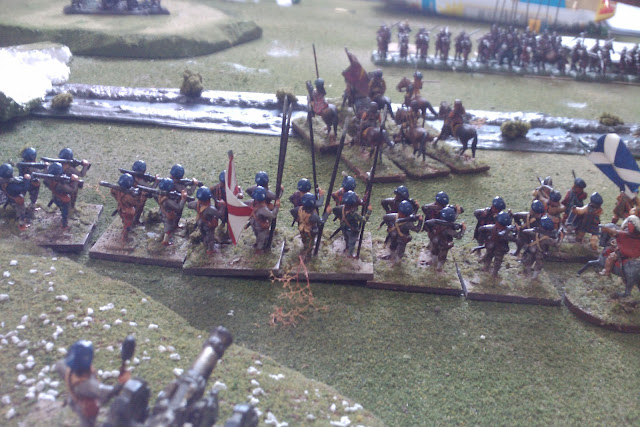 . My home made Scots infantry & artillery backing up Minifig cavalry inc conversions.
.
The lancers followed up by running down a heavy enemy gun while it was reloading and then wheeled and hit a large enemy pike & shot regiment from the rear. These passed their morale and proved to be a tough nut even taken in reverse but once the Strathcona's had wheeled around and along with a regiment of English Royalist horse, joined in, the infantry finally threw down arms. At this point, word came that Parliament's  Scots allies had beaten our English allies on the other flank and we all decided to call it a day.

Charge Pikes was strongly influenced by the WRG 1685-1845 rules and so was like an old friend for me.
So far we have tried Victory Without Quarters, Warhameer ECW and Charge Pikes. They all have their  strengths and weaknesses but for me these rules had lots of flexibility for building forces how you want them, esp useful should we ever try an historical refight, seemed to encourage historical tactics and were easy on the brain at the same time. Recommended.
Posted by Ross Mac rmacfa@gmail.com