Morschauser on the Mountain: At point does less become too little?

I reset the game this morning and gave a play through using the original Morschauser rules including the roster concept. John Curry has republished the original book bundled with extra material so I won't go into too much detail on the rules. Basically each stand is a Basic Unit which gets 1 die when shooting and in melee and is destroyed by 1 hit. The roster takes this a bit farther and makes each stand 5 basic units, so more dice flying but no changes. The rules are bloody in the extreme with elimination of one side being the only possible melee result.

As usual when comparing rules, I followed the same battle plans. In short, the game took about 15 minutes and 5 turns to reach the same outcome as the first game. About 1/3rd of that time was spent rolling dice to resolve melees during the penultimate turn. 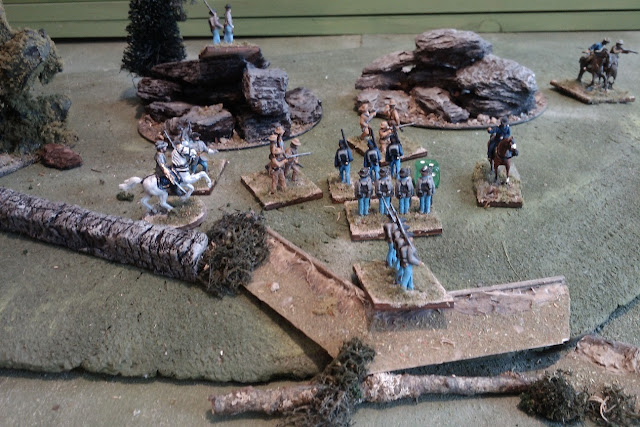 The last stand of defenders is surrounded.
The game provided a good example of how simple rules can support an interesting game where basic military principles rule. Concentration of force by means of a flank maneuver was the decisive factor with superior firepower and superior numbers of maneuver units overcoming static defenses which would otherwise have been a sufficient force multiplier to pretty much ensure victory for the defender. The use of reserves almost reversed the decision but were stretched too few by the cavalry turning movement.

It also provided a good example of how a historical minatures game can be stripped down too far to provide satisfying flavour.

Regiments and generals had no role. Stands stand and fall on their own though a player can maneuver them to gang up on an enemy, where the individual stands come from is beyond the game's concern. Likewise since each stand is a unit, there are no formations though if using a road bonus, one would be forced to form a sort of road column by default. There is also no variation of troop quality but that can easily be added and indeed there are suggestions in that direction in the book.

Rifle fire is effective enough at long range to do the work more safely than melee and gun crews stand in deadly peril at extreme rifle range. There is no rule for cover from shooting though there is a modifier  for being uphill in melee which I extended to the breastworks. In hind sight, I could have easily modified the shooting by reducing the odds to hit by one. (For example rifles hit on either a 4 or a 6, this could have been reduced to only hitting on a 6.)

The worst part to my mind is the complete lack or morale leading to the all or nothing melee, no chance of a defender being forced back or an attack stalling or being repulsed and no chance of a retreat spreading. At a higher level than the unit though, one can see a player whose front line has been decimated, willingly pulling back stands to regroup them as a tactical decision rather than as a result of direct rule mechanics, so perhaps it is a matter of focus and how you look at it. I suspect the roster system actually plays against this and perhaps lots of stands would be better after all. The rules would certainly be fast enough to handle massive games.

Hmm, odd, I feel better about the rules now after a bit of thought than I did right after the game and I can see why my earliest adaptation worked better for me than many of the later ones. In any case I once again pleased that the focus was really on the player's battle plan and getting through to a decision and not on die rolls or minor tactics. I think perhaps that that will o'whisp that is the essence of what I am seeking from rules is becoming clearer and maybe the most important bit is actually slightly different from what I was thinking.