Don Featherstone's book Battles With Model Soldiers (BWMS), my introduction to the hobby,  was published in 1970, 8 years after Wargames. The rules are firmly aimed at the beginner and are stripped down compared to those in Wargames, indeed they are not really presented as a full set of rules but as only as some suggestions  as a starting point, just sufficient to get you going and point the way. Yet, they are not just stripped down as some mechanisms are different rather than just simplified. Improvements or just a variation? 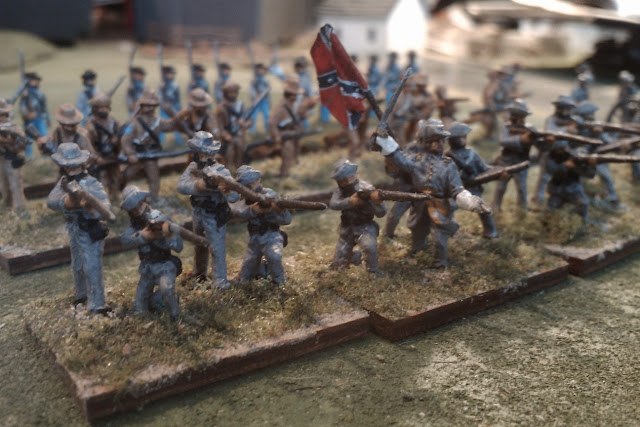 Here are the Four M's of the original rules summed up:


Melee.
Infantry is 1 point, cavalry are 2 points if fighting infantry, 1 point if fighting cavalry. Roll 1 die per 5 points and 1/2 the  score, rounded down are the points of casualties inflicted. .+1 per die for  shock if cavalry charge and in other situations where it seems warranted, for example, a flank attack.

Morale.
After melee, each side rolls a die and multiplies the number of survivors by the score. The lowest total must retreat a full move next turn.

Three options are given for Sequence of play, Dicing for 1st move, simultaneous moves from opposite flanks or written turn orders. In all cases, movement is conducted then fire then melee.

My original intent was to sum up the ACW rules included for the sample game and play them straight up but after re-reading Appendix 1, Author's Note, I will make a few slight modifications incorporating some ideas from other chapters and adapting to taste.
Movement and Terrain: Earlier in the book Don mentions the effect of terrain on movement and suggests 1/2 speed on hills and "some" deduction for crossing walls and streams etc. Since he has maintained the 3" limber/unlimnber from wargames, I will borrow the 3" penalty from Wargames for crossing walls etc and will also penalize infantry moving through woods by 1/2 movement and forbid guns and cavalry from entering except if moving along a marked path. I will also allow troops moving by road to add 1/2 to their move.
Missile Fire: Those familiar with Wargames will have noted an important omission, the "saving throws of dice" have disappeared. Cover is now a direct modifier and officer casualties have disappeared. It also means that the high casualty rates are roughly (very roughly) 1/3rd higher. Artillery on the other hand, has had its teeth drawn compared to Wargames, shorter ranges, less chance to hit and 1/2 the effect. However to compensate there is no reduction for crew casualties and no limits on ammo. Oddly, the new range brackets do not match the infantry brackets so that there are "sweet spots".
Rifle Fire. When I originally decided to do a 1/72nd ACW project in 1982, I decided to make the Rebel regiments 15 strong and the Union 12 based with a mix of singles and multiples. Having revived the project last year, I decided to base all figures on 40mm wide bases and for convenience of scenario balance, have now made all units 4 stands, 3 with 4 figures,1 with 3 which will be deployed as skirmishers if appropriate. Now 15 figures nicely  gives me 3 volleys if counting noses but it would be convenient to fit the dice to the basing. If I roll a volley for each 2 bases, that will slightly reduce the casualties and make it easy to track, I just need to track hits and remove a base when 4 have been suffered. A single stand will get no dice and cannot be combined with a stand from a different regiment. Dismounted cavalry and infantry with smoothbores will be treated the same but the range bands will be 3", 6" and 12" 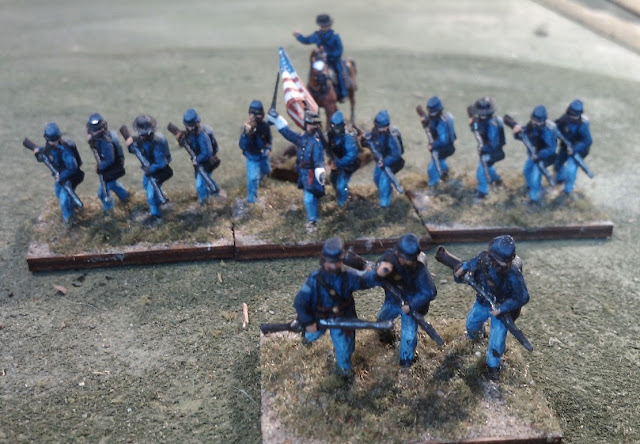 A newly raised Union regiment advancing at "low guard", skirmishers to the front.
Artillery: I would like the artillery to be a bit more effective, especially at cannister range so will make 6 equal 6" range bands with the score to hit ranging from automatic up to 6" to needing a 6.at 36". So at 6" a hit is automatic, >6"=12" 2 or more to hit, >12"-18" 3 or better, etc. If a hit is scored roll 1 die for effect. Cavalry, and troops in hard cover suffer 1/2 the number of casualties. I also want to make the artillery a little less vulnerable so I will declare that they also suffer 1/2 casualties from all shooting.
Skirmishers: The Battle Stations mentions skirmishers. After some waffling, I have decided to ignore skirmishers for now.
Melee. Like firing, I want to adjust the dice to suit my basing and will maintain the same ratio as firing, 1 die per 8 pts with a stand being 4 pts if infantry or if cavalry fighting cavalry or 8 pts if cavalry fighting infantry. 1/2 the total is the number of points lost. +1 per die for shock but I will also subtract -1 per die if attacking uphill or against cover as well as no shock being allowed in these situations. Note that this means that while artillery will get defensive fire, it will not get a melee die and will normally be over run unless very lucky.
Morale: There are various morale suggestions in BWMS, all somewhat different from the rules in Wargames, most laid out as special cases such as column attacks possibly being repulsed by shooting. The only morale used in the example battles is to decide melee and an optional test if the General is killed. In the section on ACW, there is a suggestion for a morale test for units the first time they come under fire and a vague mention of testing to rally them if they fail. I'm not going to test units coming under fire but will steal the test to use as a rally test.
If a unit is forced to retreat after losing a melee, it must roll a die on the following turn to rally. (ie if defeated in turn 2 it will retreat on turn 3 and attempt to rally on turn 4) 1,2,3 the unit rallies and may move as ordered. 4,5 the unit falls back 1/2 move then rallies and faces the enemy and may obey orders next turn, 6 the unit retreats a full move and must attempt to rally again next turn. If a general joins the unit, he may add +1 to the die but must stay with them till the end of the turn. (This +1 will also apply in post-melee morale if a general was with the unit during the melee)

There is no morale penalty for being below strength but single stands of infantry have no combat value so are best sent to safety.
Generals. In the basic rules, generals are just another mounted figure for melee though there is an optional morale test if the general is killed (but no specific rules for this happening). For now, I am going to ignore command issues and just use the officers to boost morale. This needs to come with a risk though so if a general has joined a unit which suffers hits, roll 1 die an on a 1 he has been hit. If a general is hit then on the next move, all units under his command must test (call it morale, call it command confusion). 1,2,3 they carry on, 4,5 they halt 1 turn, 6 they retreat a full move and test again next turn,
That should give me a simple but workable game and I am looking forward to trying it. I would like to end up with the following excerpt which nicely sums up my attitude and is in part, where I got it from.
Thank you Don for many enjoyable hours and great friends.
_________________________________________________________________________
APPENDIX 1  from Don Featherstone's Battles With Model Soldiers
AUTHOR'S NOTE
EXCERPT
"Nothing in these pages is a dictate, no word says you must or you shall do it this way. On the contrary, the book sets out from the very beginning to stimulate the reader to think for himself, and to use what he has read merely as a foundation for efforts and ideas which reflect his own temperament and character. Only in this way will he obtain maximum satisfaction from the hobby of battling with model soldiers." 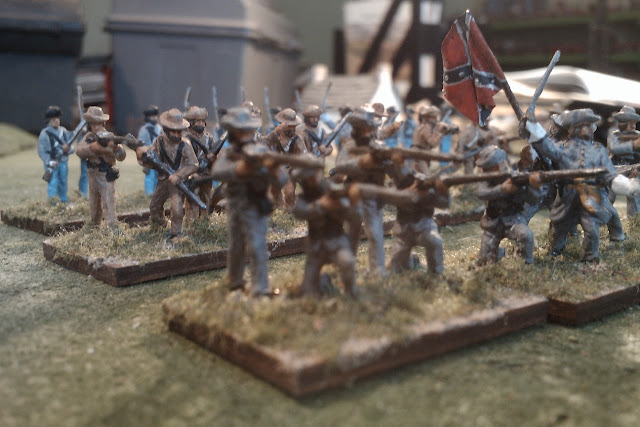 20 years being jostled in the spares bin has left minor some scars but amazingly not a man has been lost. (Until this week that is when a gun and 3 crew have gone awol. arrgh! How far can they have gone? Call out the Provosts!   )
Posted by Ross Mac rmacfa@gmail.com