Advance Guard: 15mm ACW Minifigs leading the way onto ebay.  (seller id rmacfa if anyone is interested). Keeping up my determination to make 1/72nd my smallest scale, my 15mm ACW brigades have begun filing onto ebay in search of a new assignment. I'll hold onto a strong division of Rebs since I have still have friends in town with F&F based 15's and one never knows. That leaves 6 or 7 brigades of infantry (its been a while, I think there are 12) some artilIery and a couple more cavalry brigades. I can't remember now why I painted up 4 or 5 brigades of Rebel cavalry, mounted and dismounted, I must have had Bedford Forrest in mind.

The first game for this year will be, as advertised, a Battle Stations from Gene McCoy's Wargamer's Digest. Most of these were WWII but I don't have enough suitable stuff to fudge any of them at the moment. I have, however, turned up 2 ACW ones. Both look like fairly simple, straight up games (actually they are almost a variation on the same game) and I think I have enough 1/72nd troops done up to try them out so this will be their official debut. (There was a skirmish or 2 between the Blue & the Grey back in '82 when the paint was new on the original regiments but even the veterans don't recall the details.)  The game in hand comes from December 1974.

The problem is set up as an attack by a Confederate Brigade against a Union blocking force of unknown strength. This is one of the fairly early ones, it contained a photo of the battle field from the player's position, some background, mission, notes on your strength and some ranges and rule distances to help you interpret the photo and make your plans. In this one, they never do reveal the strength of the blocking force so I intend to make my plan, write orders and then dice for the strength of the opposition. Since I have more boys in Blue painted up than boys in Grey, I may also switch the sides so I can make the game as big as possible. The game is unlikely to take long to resolve so I intend to emulate last year's fight for the stonewall from Featherstone's BWMS and repeat the game using various rules, in this case, Featherstone's rules from BWMS which for reason's I don;t recall, I didn't play last year, Basic Morschauser straight up out of the book and last and hopefully not least, Hearts of Tin. If it goes really quickly I may throw in Fire & Fury as well. 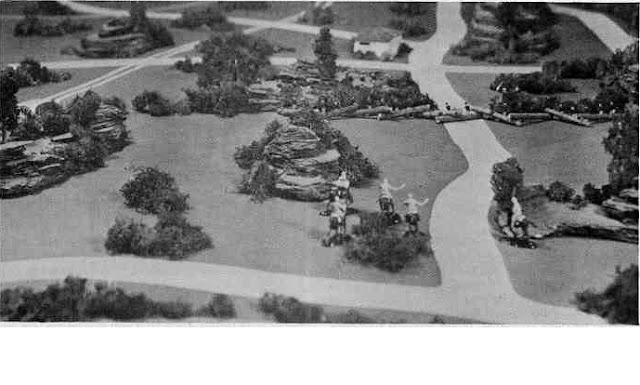 This picture was originally published in the December 1974 edition of Wargamer's Digest. Note the use of Airfix figures. My boy's will feel right at home.
I'm not going to quote the original article but will instead summarize the information.

You as the player, have a Brigade of infantry supported by a squadron of cavalry, a battery of artillery and a battery of horse artillery. The enemy has a force of unknown strength in improvised defences across the road up which your army is moving but there is no sign of cavalry or artillery. Your mission is to clear the road.

The brigade is composed of 2 regiments each of 7 companies each of 6 men, 1 of which is a skirmish company. The batteries are of 2 guns each. The cavalry  totals 12 figures.

If I use my Confederates which is what the magazine calls for, I have 1 brigade painted up which in my case is composed of 3 regiments each of 4 stands/companies (15 men per regiment), 2 guns as well as 2 stands of cavalry (ok actually they are Steel's Scouts from the Riel Rebellion but they are willing to sub in),  If I flip sides and finish the 6 cavalry currently on my painting desk, I'll be able to field 6 regiments of 4 stands, 2 guns and 3 stands of cavalry.  The jury is still out.

It is roughly 21" from the cavalry in the picture to the Union line. A few other distances are given to various hills etc. but one can estimate well enough from the picture once you have that scale.

The movement distances aren't too far off what I will be using, a little shorter than Featherstone and Morschauser but close to the average for both HofT & F&F (assuming some tardy results). The shooting ranges are a problem though, about 1/2 to 2/3 of those in all of the rules except for the musketry in F&F. Actually they are not that  far off from what HofT had before I lengthened the ranges last year, that was one of my "hmmm" items from the December game. I may increase the distance between terrain features in order to bring them in line, or I may adjust the ranges as an experiment, or both.

With luck I hope to get this laid out and play the first game on Sunday.