I do seem to be floundering a bit this year, not quite sure which way to paddle. I was just settling in nicely to my ancients, rules, organization, basing and setting all sorted and some figures on the table, when my belated birthday present to me showed up. Ancients, what ancients?

The first distraction is for a minor side project, 18thC Portable Turks to face some Minifig Austrians. Since I was putting in an order to Historifigs anyway, I got a few samples of suitable 25 mm Scruby figures with the idea of possibly expanding into their Napoleon in Egypt range. 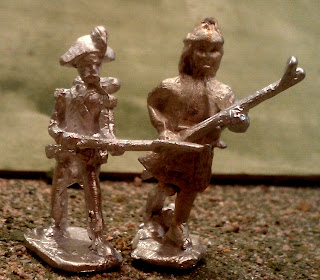 Left, Scruby 25mm French Infantry, right one of my homemade Albanians.
Hmm, well, the Scruby looks very compatible with 1/72nd plastics. If only I hadn't tried to make my Turks look as compatible as I could to middle Minifigs.Oh well, it was a passing thought. 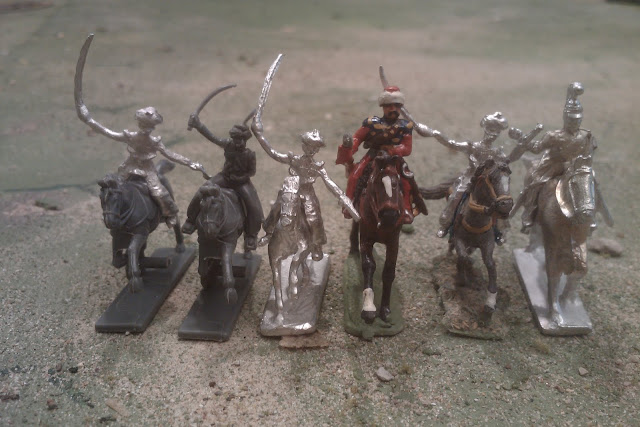 Left to right: Scruby on Hat, Hat mamluke, Scruby, PA conversion, Scruby on Minifig, PA.
I was a  little surprised when I found out how much taller my Prince August home cast horses were compared to Minifig wide-rump horses. (Doesn't show well in the picture but my light cavalry would make Ron's Horse Grenadiers look like they are riding ponies) Since my plan had been to use converted PA for the project it had stymied me and I stopped at the 1 sample. As you can see the Scrubies go very well with the Hat Mamlukes.They also look pretty comfortable on the Minifig horse.

Hmm I wonder if the hobby shop in Halifax still has those Zvezda Turks that I almost bought in June,,,,,
1 box each of cavalry and Jannisaries would close this project off once painted.

So much for the minor sideshow.

I've been deliberately avoiding my main interest for 2 months to let things percolate. There are several main issues, but the biggest one is a result of downsizing my table, something that I obviously haven't fully resolved in my mind. Sometimes I wish that I could really "get into" skirmish games with a handful of figures, or a high level element based game, or get into 10mm, and I might yet do any or all of those. In the mean time,   I've been trying to translate a vague vision in my head which involves a whole bunch of 40 mm figures, onto a 30 square foot table.

Two years ago, I experimented  with squishing eight 40mm figures onto a 60mm wide base. To my surprise, most of the figures fit quite well. the problem was, with the element based rules I was using, it just decreased the number of maneuver and fire elements allowing me to get less from more. The 8 man bases were also awkward for using some form of roster or marking hits. A week or so ago, while fiddling about with a few figures trying to decide what should constitute a scenario "unit" and how that related to an historical refight, I noticed to my great surprise that the couple of not yet based Scruby figures that I was pushing about were perfectly stable. More stable than some of my individually based S&S figures. It occurred to me belatedly that my initial trials on individual bases for 40mm troops had been conducted primarily with S&S figures on thin-ish card bases on a cloth covered table.  Some experiments followed  and it soon became clear that on my painted tabletop with its new flat hills, most of my own, Zinnbrigade and Scruby figures were fairly comfortable on 1/2" frontage and almost all were very comfortable on a 15mm frontage.  This means that I don't have to choose between a tighter formation or individual basing after all.

In front: a 24 man unit on my usual 23mm wide washers. Behind: a 32 man unit on 15mm frontage.
My original 1812 organization called for 4x8man companies, each company including an officer. That's a rather high ratio of officers but it worked fairly well except that 8 men was too many to be a company and too few to be anything else. The main problem was that it took up too much room on my table. Essentially, each scenario "unit" became a "company", or occasionally 2 companies.
This morning I pulled a few memoirs off the shelf, mostly 1812 & Indian Mutiny, to look for some context. Even though written by Subalterns, it was hard to find skirmishes where individual companies played a role.  Suddenly my preference for "traditional" games with battalions as units made sense. Even a small action like the Battle of Mackinac Island  seem better as small battalions of regulars and "companies" of Indians than as a bunch of companies.
Turning back to scales and frontages, with a 12" musket range representing somewhere between 120 and 200 yds, I can reasonably fudge a man on a 15 mm frontage as representing between 10 and 20 men in a single rank So for a raid, a 16 man "wing" might be as few as 160 men or a full 32 man battalion might be 640.  With a frontage now less than 10", the 8 battalions needed for the largest scenarios would make for a crowded table but they could work while smaller forces of 3 or 4 battalions would still be a worth while force.   Now that makes sense to me. Looks good, fits, and is flexible.
I did considerable pondering today on various shapes of  multi-figure bases but also hauled out some of my experimental movement trays and some surplus peel and stick flexible steel bottoms. The thought of taking scarce funds to buy wooden bases that would be firm and not warp so that the singles would stand plus flexible steel bottoms and magnetic sheeting for trays was not attractive, thus the search for a suitable configuration of multi-figure base that would cut costs by 2/3rds.  I was strongly attracted  to 2 man bases which could be deployed as pairs of skirmishers  or grouped onto movement trays without need of magnets but I proceeded  to recheck the magnetic bases anyway. Taking some of the flexible steel, I cut these to a nice 15mm x 25mm rectangle and applied them directly to a few figures since I didn't have any suitable individual bases on hand. Looking at them, I realized that the nice big, flat Scruby bases were almost the right size. By trimming the flexible steel, I was able to get a stable, magnet adhering base without any need for a wood base in between. Luckily the Scruby figures are about 1/2 the weight of the S&S.
So how did they do with the magnetic bases? 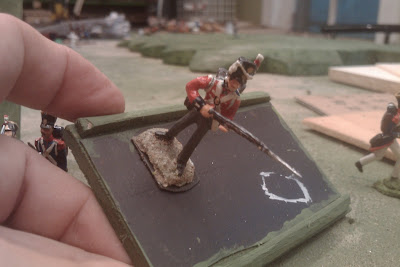 Now that's a steep slope! and this figure had his original base trimmed last winter.
Still, I think I'll order some of the extra powerful magnet sheet anyway.
Of course, I hadn't ordered figures for 32 man units. No matter, lots of unpainted figures on hand and I still have to sculpt officers. Still best get selling some more old figures! Now, do I include officers and sergeants in the 16 man wing total or just "go Charge!" standard with 16 other ranks, officer, sergeant and drummer??