From the archives: Pontiac's Rebellion at Cold Wars 08

If you exclude the bit about me trying to pawn off some boxes of 54mm Airfix WWII Russian infantry at Cold Wars 97, which first put us in contact, it was really MacDuff who put Rob Dean and myself together. Rob and Chris Palmer had been been casting up and converting 40mm Prince August and Meisterzinn figures and were looking for a suitable set of French & Indian War rules for doing Grant Teasers when the Courier published MacDuff.  Since we were already in contact by email and I was planning to be at Cold Wars again, I was  invited to take part in a planned game, a version of Wagon Train if memory serves (or maybe I invited myself, I don't actually remember).  I don't have a picture of the 1998 game, (incidently that was the same Cold Wars where I played my first NQSYW game and decided to try out this home casting thing,)  but here are some shots of the last (or latest rather ) of the MacDuff games we have staged. It was a scenario inspired by the action of Bloody Run during Pontiac's Rebellion. 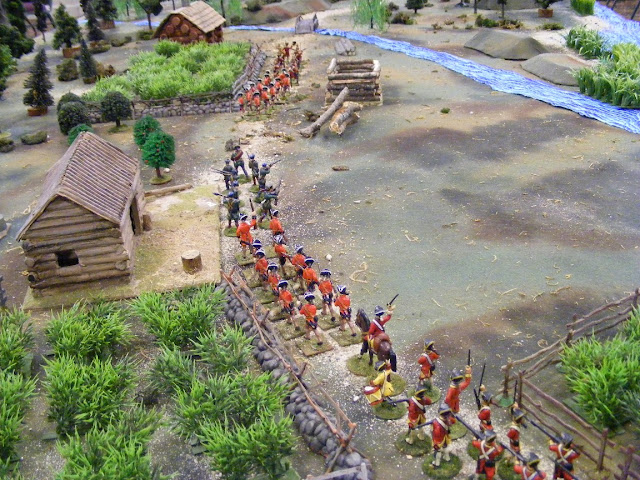 Its quiet.......too quiet! (Well apart from the fifer and drummer.)
Essentially this was an attempt by the British to surprise one of the Indian camps. The game was laid out with no Indians on table and the British under orders to march down the table, carry out a mission and return.

The figures are largely Rob Dean's as well as some by Chris Palmer and a handful of my Indians. Most are homecast including many, many conversions but Irregular and some Sash & Saber are beginning to make their way into the mix. The terrain is largely Rob's apart from a few cabins, fences and crops. 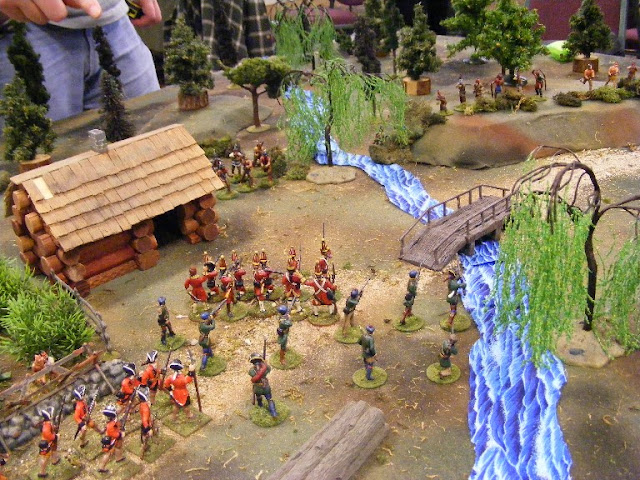 Ambushed!
The Indians have of course, been tipped off and are waiting though judging by the way the fifers and drummers in the main column seem to be happily rattling and tootling away, they probably didn't need advance warning. 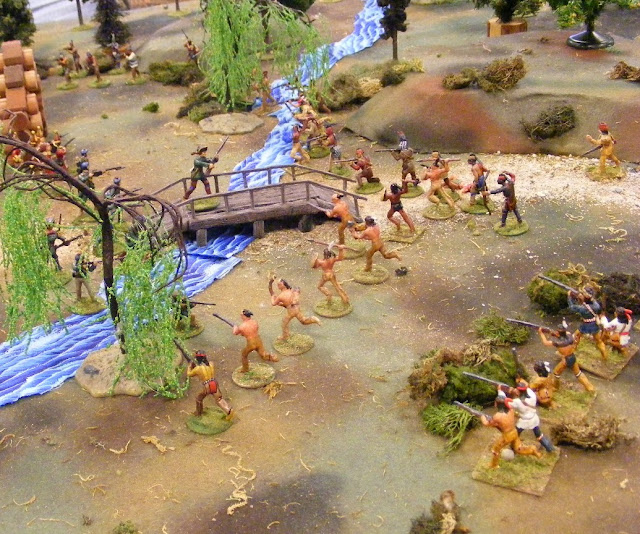 Take the bridge!  Major Robert Rogers leads the way.
I had adjusted the rules once again since the last game and once again had not had adequate occasion to play test thoroughly although the guinea.p...err I mean lads, in Halifax, played out the scenario as an AWI one. Mostly, I was pretty happy with how that version worked but it wasn't quite as exciting as some earlier versions and there was one unsettling optical glitch. The Rangers were surrounded and all but wiped out by Indians in hand to hand combat only to reappear en masse when the remainder rallied. In theory that meant that they had broken, evaded avoiding actual combat and then been rallied. In practice they had been woefully unlucky in melee and shockingly lucky on the rally rolls and the whole thing looked and felt wrong and led to yet more tinkering. 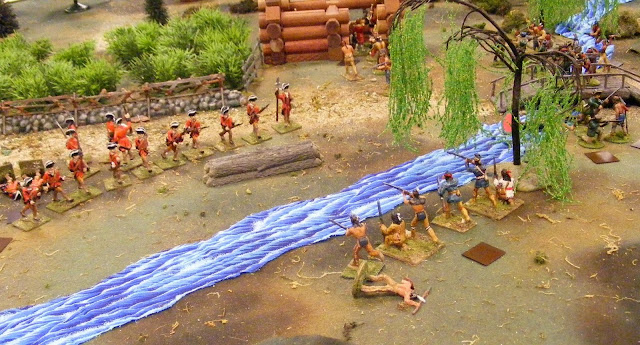 Indians to the front, flank and rear! Thank heavens the time is up!