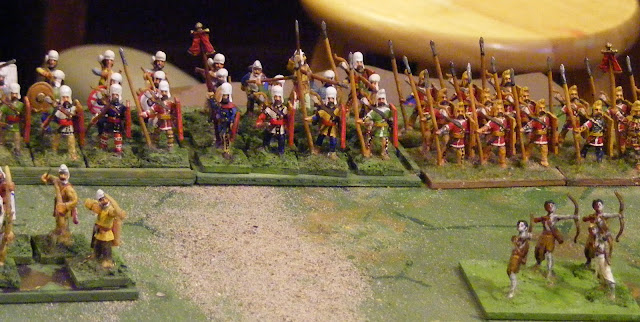 Last August I replayed Charles Grant's Platea from his book The Ancient Wargame, adjusted to my means. This year I have tackled  something a little smaller, the clash at the Apocryphal Well.  Not having Assyrian and Egyptian armies, or a 7'x9' table, I again adjusted the game to what I do have available.

For those not fortunate enough to be familiar with the book. This is straight, fictional encounter battle between Egyptian and Assyrian advance guards clashing over control of a vital watering hole. (I should really have thrown a brown cloth over my green table to add atmosphere.) 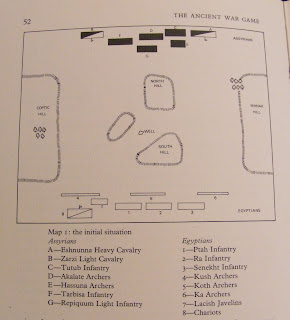 The role of the Egyptians with their chariot squadron was given to my Royal Persian forces. The Rebel forces therefore, were left playing the Assyrians. The next issue to be dealt with was unit size. Grant's order of battle included units on the order of 30 to 40 man units for infantry and 20 for skirmishers and cavalry deployed on a 63 square foot playing surface. I decided that my 12 man light infantry and cavalry units and 24 man medium infantry would suffice on my 30 sq foot table but reduced the rebel units to 16 since Grant's Assyrian units were smaller than his Egyptian ones.

Next came adjusting the actual units to fit the armies I was using and classifying them under my rules, The Gathering of Hosts. The match wouldn't be perfect, especially since I lack Persian spearmen but I felt that it was close enough. I decided to allow the Persian infantry to keep their bows but ignored the Scythian Nobles bows since the Assyrian cavalry had been fielded without them. For some reason I thought the Assyrian light cavalry was double armed so used the Scythian horse archers, oh well.  I finally settled on the following and laid out the troops according to the map:

The view from behind the Rebel lines as the armies deploy.
I've been working on the rules, trying to get the right balance of uncertainty and control, eliminating those persistent morale tests, fine tuning troop types etc and so played the game several times without having re-read the account. Once I was happy with the rules, I reset everything again and prepared to follow the battle plans from the book.

For the Persians, this was essentially a straight advance on the well with light troops covering the flanks and the chariots in reserve. The Rebels sent their light cavalry on a flanking maneuver on the right while attacking up the center, using their heavy cavalry initially to soak up arrows while protecting the left. 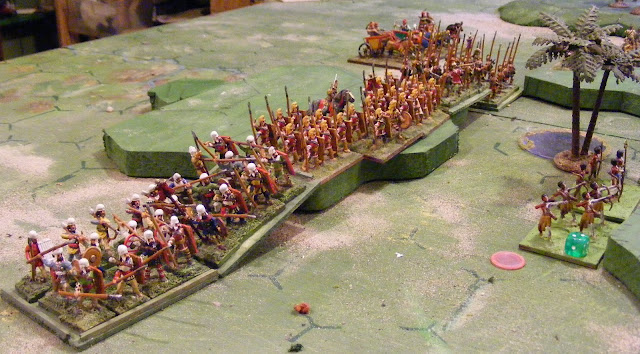 The Persians adopt a position on the South Hill.

Things went according to plan at first, apart from the Scythian light cavalry refusing orders for 2 turns in a row,   In the center, the Armenians drove back the Ethiopean archers and then fell back. A prolonged archery duel ensued with the armour on the Saka not quite making up for their lack of numbers. 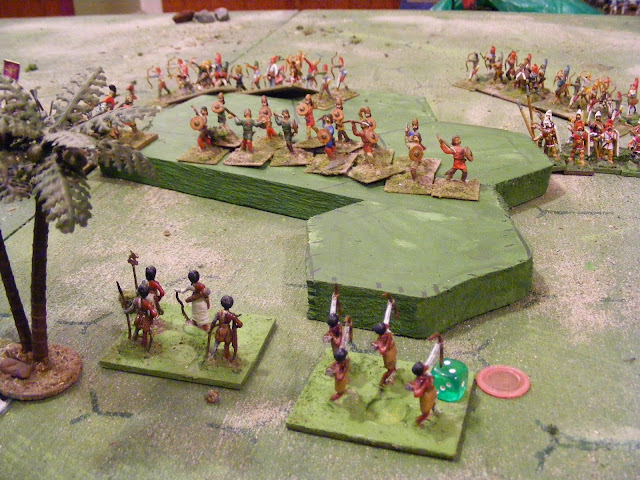 The battle in the center heats up.

On the Rebel left, the cavalry duly took a pounding from the Raffum archers before being released to drive them off. This they did with no great enthusiasm. In fact honours of the day go to the Raffum archers whose deadly accuracy was backed up by fierce swinging of their sagaris hand axes and by their sprinting, managing to out pace the reluctant cavalry once. Luck can only take you so far though and eventually the cavalry drove them from the table. 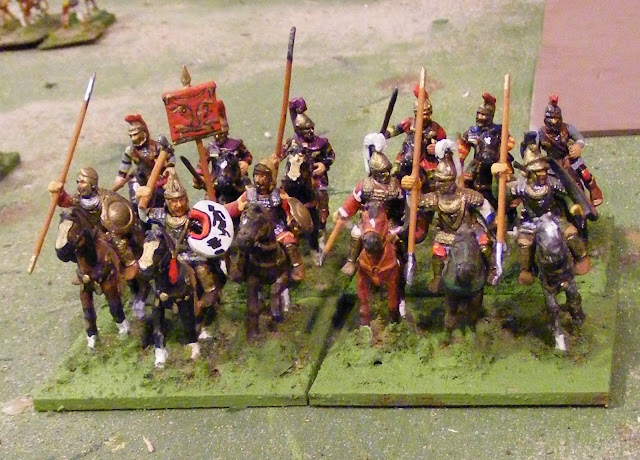 Scythian Nobles in the front rank with some fill ins in the rear until I finish refurbishing the full unit.

On the Rebel right, once the Skythians got moving they exchanged fire with the deadly accurate Bythnian archers before sliding around the wood to appear in the Persian rear. This left the right flank of the Greeks open so Rossius ordered the Armenians to shift to cover the gap. These, no doubt exhausted by chasing off a few archers, dragged themselves over, taking good care to avoid any possible contact with the enemy. I suspect there may have been a compact with their Phrygian counter parts since these also refused to advance into the gap, or for that matter to go to the support of the chariots! ( Odd how the same 2 units can keep rolling "1" when they are rolling the same dice as every one else!)

Greeks, The Armenian Regiment and some Saka behind them at the start of the game.

By the book, the light cavalry should have gone for the Bythnian archers but finding themselves actually behind the chariots after these had refused their latest order. It seemed like too good a chance and so I charged them in. Now rather than field the chariots as late Achaemenid scythed chariots, I had opted for the earlier type that may have only existed in Funcken and the Garrison catalog. At least the armoured archers in the chariot crews gave them some form of fighting power even when stationary and hit from the rear. Since the Skythians had already suffered 25% losses from shooting it ended up being 3 dice looking for 3|+ vs 1 die looking for a 4 and yes that meant 2 tied rounds of melee with only 1 hit a piece! Finally after the Scythians finally managed to win a round of melee,  the remaining chariots broke contact and lumbered off (2d6") with the fleet footed light cavalry (3d6") making no real effort to pursue.  The least valuable player award goes to the Scyths. 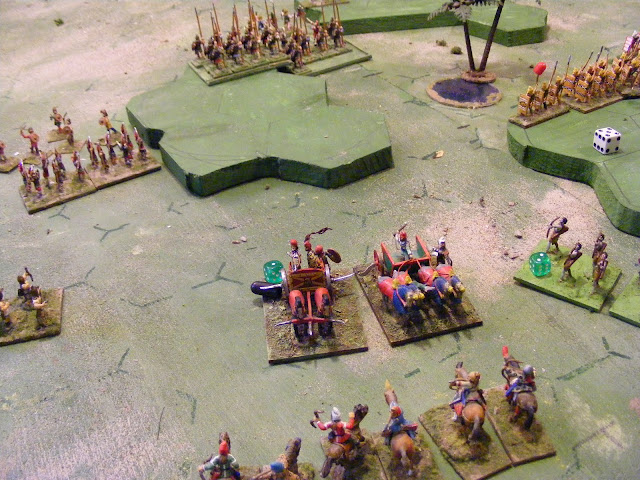 The chariots begin rallying while the Scythians start worrying about the various Persian light infantry closing in on them.
So far the battle still hung in the balance. The Rebels had had some successes against the Persian light troops and the Persian infantry had suffered significant casualties but the Rebel center had taken worse than they had given. It was down to clash of 16 armoured Greek hoplites vs 24 Phyrgian spearmen. At first there was a period of pushing and stabbing with no advantage to either side, but eventually numbers told and the Greeks began to waver then turned and fled, bursting through a unit of Saka archers who had unwisely moved to stand partially behind them, As his army started to come apart, Rossius signaled  for a general retreat. He  was going to need more and better troops if his claim to the throne was honoured.

A simple little game but fun. It took me about 2 hours to play through 10 turns and reach a conclusion.
The last of the 3 battles from the Ancient Wargame is the Battle of the Sambre, Caesar vs the Gauls. I have neither but I think I may be able to turn it into an incident during the retreat of the 10,000 with Xenephon standing in for Caesar. Won't be for a few months at least though. Just about time to break out some muskets.
Posted by Ross Mac rmacfa@gmail.com