(Keep It Simple Stupid for anyone not familiar with the acronym)

As usual, it seemed a shame to take the table apart after just one game. Jerry and I had played a turn or two of HofT  and I had been surprised that I couldn't remember simple things,some things seemed to be missing and I was left unsure if the rules did actually work as intended. So, I reset the table on Sunday with slightly reduced forces, reread the rules and played again.

To my great relief it was all fine and worked as intended. The solo play through took barely an hour indicating that this scenario is at the bottom end of what I had in mind, which is about as intended.  I did go back and reverse a too clever idea of subtracting 1 from defensive fire for troops being charged (to represent the intimidation of the charge) and restored the +1 to chargers instead. Its easier to remember and more intuitive. It also resolves an issue that cropped up about there being no charge bonus when no defensive fire is involved which was not intended.

I am also questioning how the reaction rule and the "fired or fought in melee" modifiers to the Orders chart interact. The system works just fine and I still like the idea, but in the heat of battle, even with an annoying clutter of markers, it was all too easy to lose track of who was allowed to react and who had modifiers. It also didn't seem to have exactly the intended influence on player's decisions (including mine). The alternatives include going back to a movement penalty for shooting and a compulsory rally of some sort after melee and just not worrying about it, rather, letting players get on with their battle plans without getting bogged in detail.  I need some thought about this, luckily there is no rush as things aren't broken, just not optimal. I'm over due for a coffee with Lentelus anyway so will wait till I can bend his ear on it.

It occurred to me today after reading Bob Cordery's Tuesday blog entry, that the scenario itself could have been played out just as enjoyably on  a small grid using MOB with 1 stand per regiment/gun. Luckily the ACW venture is as much about an excuse to paint up 1/72nd figures as it is about playing games so I remain happy with where its headed. Anyway, I still retain that option since I can always grab 1 stand per regiment and play MOB or the Portable Wargame once I get a suitable board fashioned. (That's on my list, I want a portable game for the garden, living room or on the road).

Anyhow, at this point I was so happy with the 1/72nd ACW game that I began to fret about the future of my glossy 40mm toys and MacDuff. It seemed like an ideal battlefield for War of 1812 or even an Oberhilse vs Faraway bash if I just replaced a few buildings but it was cold out and I was tired of looking at the mangy mismatched summer/winter forest (my goal for this year is now consolidated look scenery for each game). I had just been reading Thackwell's Narrative of the 2nd Sikh War and suddenly had the itch for a Colonial game. I reset with Adobe buildings and my plastic palm trees which look sufficiently unreal to look at home on any table occupied by toy soldiers and scream "this is a warm place, not cold and wintery at all".

I don't  have any Sikhs yet, so hesitated a bit and then started thinking Mexico. A US force marching on a Mexican battery.  I only have one unit of Mexicans, but the Peipur Tigers look right at home. What I really wanted were some irregulars, casting my eye about, my glance was caught by the gleaming white of my pirates. Well, the San Carlos Grenadiers have been known to support them before......... Now , for opposition, there has long been speculation about secret Oberhilse support for these "entrepreneurs" and anyway, this whole thing had started with me wanting to get my Redcoats on the table. It wasn't until I caught up with Bob's blog later that I realized where at least part of this urge to go Colonial had come from, his game preview last week must have been in my sub-conscious!. 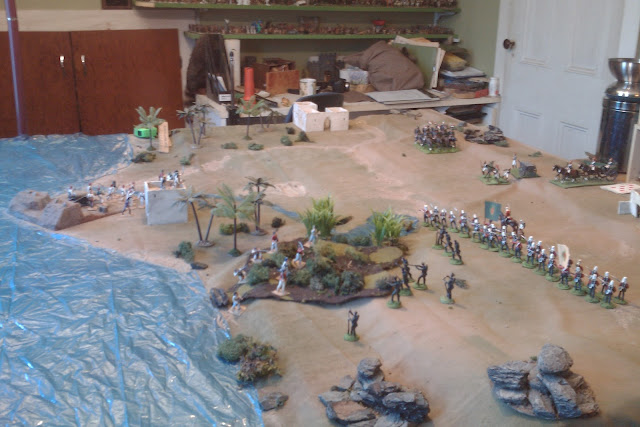 Somewhere in Northern Atlantica, The FTC takes on the competition. Charge!


Recently I have found myself praising Charge!  publicly in various forums and since I hadn't played a game in ages, this seemed like the time even though it wasn't exactly 18thC linear warfare. I don't have room for full Charge! armies so fielded 8 man Light Infantry and cavalry units and 16 man Infantry units. Not having an opponent to provide surprise and friction, I decided to forgo the simultaneous  moves that are one of the strengths of the system and use a card draw system instead.  The result was an interesting little action that took about an hour to resolve. I hadn't really meant to make the pirates equal to British riflemen or have Israel Hands as Gunner, its just that I hadn't really thought about it. Damme! Light infantry and artillery can sure decimate line infantry if their dice are hot!  Especially if the infantry spend too much time tootling about and stopping to fire back at long range. Enough said. I decided to call up MacDuff to take out this troublesome battery.

It hasn't been that long since I play tested the new version of MacDuff so it was deeply worrying to find myself immediately tripped up. I had movement and ranges messed up, couldn't remember how various rules worked and so on. Stopping to read things over, I realized that the same reaction and orders check issues as encountered with HofT were cropping up. (the mechanisms were similar but different in detail) I had once again tried to get clever and encourage certain tactical choices when the game is not detailed enough to give a proper range of choices and consequences. Picking just one or two to focus on is pretty arbitrary and obscure to players who generally want to just get on with the battle. The choices should be clear and evident, not hidden, and they shouldn't pull player's focus from their battle plan  to their subordinate's duties.

I had also changed distances that I had used for over a decade to make it easier to one day map the rules to a 4" grid should I ever choose to. Time enough for that if the time comes.  I ended up putting the rules aside and running them by instinct rather than by what was written.  The result was a very enjoyable, brisk little action. Now, can I turn off my head's desire to improve and adjust long enough to write what I played? The differences are just small details, not main concepts, surely it can be done? 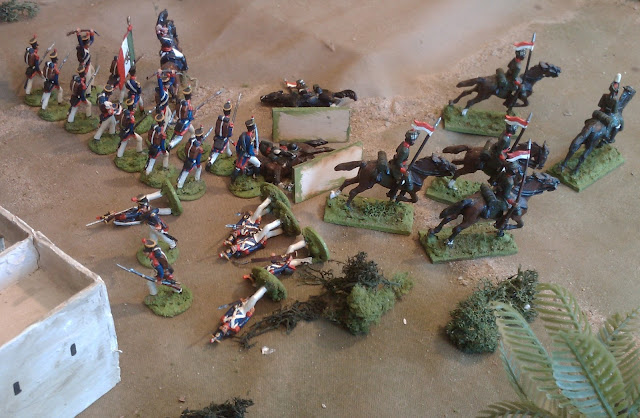 Since it was a quick, hastily improvised, game, and this post is already overly long, I will just briefly sketch the main events. The red coated Faraway Trading Company (FTC) column advanced down the road, lancers spurring ahead, rifles working their way through the woods beyond the lake. As soon as the Pirates spotted the advancing column, they quickly turned the gun about and 1 company entered the woods to counter any threat from that direction. The remaining company was uncertain whether to occupy the village or push up to snipe at the red coats so I diced for their reaction. They happily trotted across the stream and up the hill, forgetting all about the battery. It was but the work of several minutes for the lancers to gallop down the road over the bridge and into the battery position. A hasty discharge of cannister brought 1 lancer down but the the crew was cut down or chased away and the battery silenced.

The sound of drums approaching from the north announced the arrival of the San Carlos Grenadiers who had been camped just down the road. (Apparently the outpost was technically authorized by the Principality. )   The Buffs, supported by the Rocket Troop, deployed to face the Grenadiers while the Tigers deployed and advanced on the pirate, sorry Volunteer, skirmish line. After a brisk exchange of fire, the former Pirates retreated hastily into the village.

Reforming, Larsen's Lancers rode back up the hill, eyes open for an opportunity. Calmly the order came for the Grenadiers to form square. Their flank was in the air but not a man stirred. General Paz (previously San Carlos troops have only appeared as auxilliaries and have not had a General. Their strategic situation is weak, surrounded by stronger enemies,  so I thought perhaps they could use a leader who shares the name of a famous general), who had now arrived to command the force, galloped forward to repeat the order in person but the stern Colonel of the Grenadiers refused again despite his flank being in the air. (a 1 followed by a 1). Instead, the 3rd company, which was lagging, was ordered up on the double to cover the flank. They arrived just as the trumpets rang out and were ridden down in an instant. Onward swept the lancers but when they crashed into the main body of the Grenadiers, a situation where military (or rules) experts rate cavalry as being worth double an infantryman, they were rudely repulsed with heavy losses. The General could be heard swearing under his breath but he courteously praised the steadiness of the Colonel's Grenadiers. 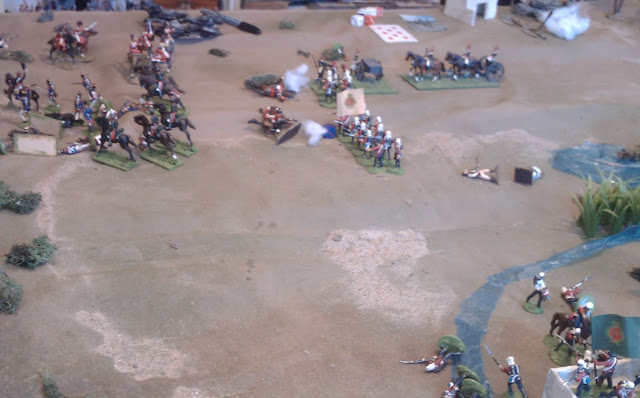 By now the red coated cavalry of Coast Guard had arrived. Taking no lesson, they formed line and charged the Rocket Battery and the Buffs. A single crashing volley laid low a quarter of their number and sent them reeling. Down the hill, a loud ringing cheer announced at last an assault on the village. The defenders fought hard but the regimental colours rose over the highest building in the village. General Paz gathered his troops and fell back to gather reinforcements.