On Tuesday I load up and head out for Huzzah. It would only be an 11 hour drive if I went direct but I'll be two nights to visit family en route.   I was starting to get anxious about not having troops, terrain or rules ready but things are finally coming together. 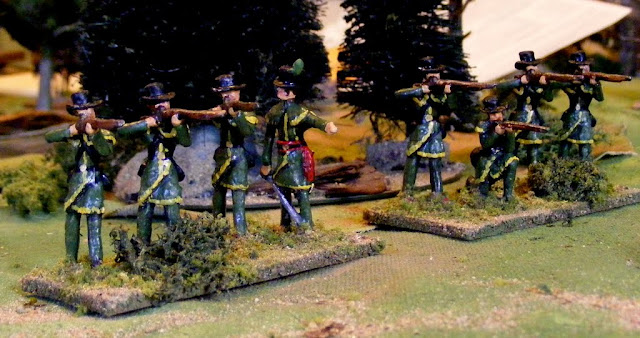 At last I managed to de-flash enough of my new riflemen to make a light infantry unit. My original idea had been a unit of 24 close order militia in hunting smocks as well but close enough. I usually like to have my skirmishers in pairs with 1 firing and 1 ready, moving or loaded but that meant 4 conversions since I had only made 1 pose. Between the flash issues with the degenerating, generic "ready" pose of infantry and other calls on my time. I decided to settle for converting an officer and a kneeling figure at the ready. I was painting them before it sank it that I had grabbed a firing kneeling fellow. Oh well, maybe the unit is having a "mad minute" or is manning a palisade and has been waiting  to see the white's of the enemy's eyes before they all fire? Anyway, they'll do and my Maine forces are now ready.

Earlier this year, on rather shaky grounds, I decided to base my cavalry on 3" wide bases each about right for a squadron ground scale wise, with 2 stands per scenario unit despite having 3 per unit. In the games that have followed I noticed that the cavalry seemed a lot more fragile and a but less effective. My first thought of course was "Maybe I shouldn't have removed the -1 for shooting at cavalry". My second was that  I had not intended cavalry to be running in 1 or 2 stand units and that this was the real culprit. The obvious conclusion was that I should just put all 3 stands on the table. But this meant fielding 9" wide units that were only slightly more effective on a constricted table where I had had trouble finding 6" for a squadron to charge in. The uncomfortable conclusion was that the 3 figure, 3" wide bases have been a mistake. I hemmed, I hawed. I considered that only 1/2 of my cavalry had been rebased.  I thought about what would be more fun for any players at the convention and I went out, cut a stack of 2" wide bases and got to it. 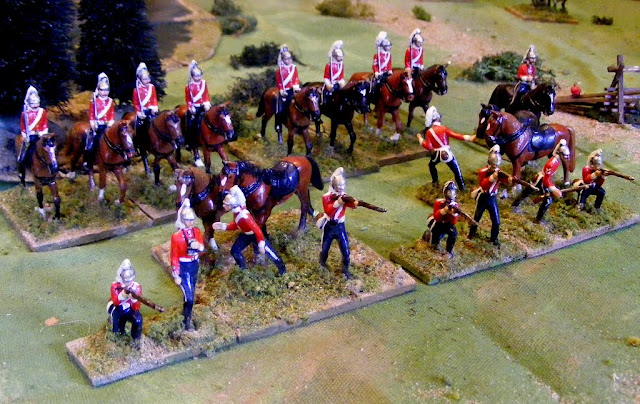 Originally I wasn't sure  if I should take the Director General Bodyguard along, masquerading as the New Brunswick Yeomanry or use my unlikely but more accurate King's Hussars but in the end, the latter were going to be the only chunky unit coming so I decided to base the DGBG up (again). But how to base the dismounted version?  In MacDuff, and in an earlier version of Hearts of Tin, I laid out rules for percentages of figures or stands that become horse holders and I prepared to base up 2 horse holder stands and 2 light infantry stands.  Oops! In the current version, it doesn't work that way any more.  Largely because of how the stands function under the rules, each mounted stand needs to remain a stand when dismounted so instead of separate horse holder and light infantry stands, the horse holders are assumed to be behind each stand. How was that going to work with what I had painted? It took a while but the result can be seen above. This will allow to field the regiment to be fielded as one 4 stand unit or two 2 stand units. (Technically each stand is a weak squadron based on ground occupied but I'm going to call them troops and make 2 squadron regiments.)


The pontoon wagon has been painted and based but it looks like the driver will be a rather inappropriate Bengal Horse Artillery driver. I didn't get Guards in Bearskins or Highlanders sculpted, cast and painted so the troops in Havelocks will have to serve.  The Royal Navy landing party is not going to materialize but I have enough to man a rocket. I still need to come up with 2 crew members for the Steam Battery and touch up a couple of pieces of scenery but I should be ready for a solo playtest of the final version of the scenario using only the troops that I'll be packing. 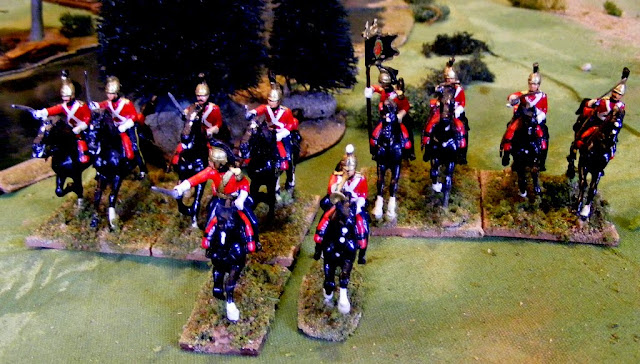 The glare from the gloss varnish sure doesn't make picture taking any easier!


Oh and I need to find something to pack the troops in as well as something for the Rough Wooing lads. They haven't been on the road in a few years now.