The Good, The Bad and the Ugly

No Western gun fights, but I have paused long enough in working on the canvas topping to try it out. 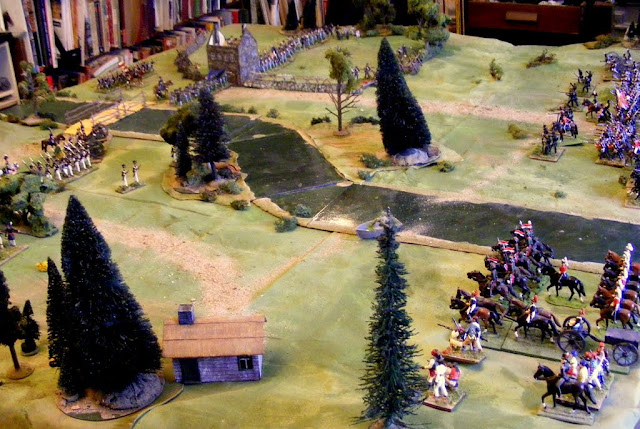 COLOUR:  Firstly, it doesn't photograph easily. The colours in the picture are not accurate but they are the best I've achieved after trying a couple of photo shoots and reaching my limit for fiddling with colours on the computer. The green is paler that I planned, thanks primarily to it being so badly diluted, but most of it is darker than it looks here and there is stronger contrast between the 5 colours of paint on it. I think this is something that  calls for better lighting, my tripod, some white balancing and a skilled photographer who really cares. Don't hold your breath.

The cloth is not nearly as finished as I intend but time is short and energy low so its been declared good-enough-for-now. One thing I intend to try later is Bluebear Jeff's suggestion of sponging on colour. I did try a spongy mini-roller but it was a dud. The good thing is, it can be over painted and  repainted as often as I like.

I had hopes that the figure bases would blend better than they do. The paint colour was originally selected in part by painting swatches on paper and placing stands over them. Apart from any colour issues, the texture of the stands contrasts with the painted surface. Scattering flock on the table will help but that's not something  i want to do for every game. A more mottled paint scheme with stronger colours might lower the contrast between bases and surface. (Or I could just refinish all my bases.......)

HILLS. I was afraid that the heavier canvas would not settle as well as the lighter, more elastic cloth that I have become used to. It doesn't but it settles better than I anticipated. It works well over very shallow contours or over shaped foam hills. With steeper contours, you get a very natural slope with occasional hidden air pockets. Fine for stands of light plastic figures who glide over the top, not so much for single 40/54mm metal figures who sink down slightly then fall over.

However, it belated  occurred to me that hills painted to match could be dropped on top and would blend in. This would allow for the inclusion of bluffs and cliffs which are extremely difficult to mange when draping cloth over shapes.

An added "feature" of the mottled finish and gentle slopes is that hills are really hard to see. Could add an interesting twist to games over video. 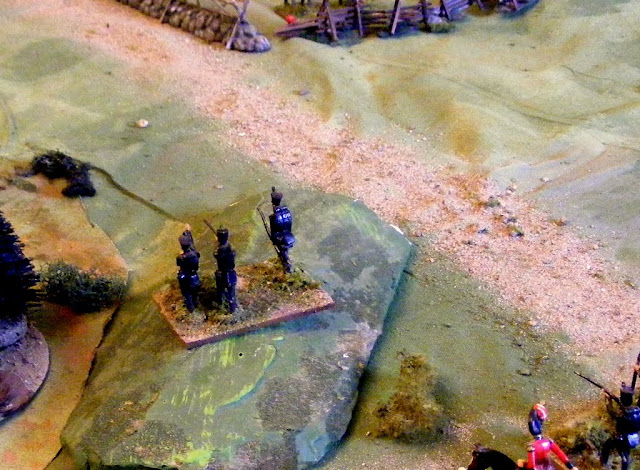 This is an old hill, not yet repainted to match but its already acceptable to me.

WOODS, RIVERS & THINGS. One of the things I decided recently, was to go back to putting template shapes down under woods and villages. I used to but had given it up for just marking the perimeter. Sometimes that works better than other times.

The canvas shapes I have tried don't cling as well as felt clings to felt but a quick experiment shows that double sided tape would fix that when it matters. I have enough canvas left over to do as many as I want and since canvas takes paint, I could paint streets, paths and gardens, forest floors, oasis pools, plowed fields etc, what ever is needed. I just need to bone up on graphic art. (Anything not done in this live will be left for a later one.)

Actually,  I feel the temptation to paint on roads and rivers and just paint over them again when they get in the way. This would allow temporary terrain boards for specific historical battles or teasers and avoid unsightly edges. Next best thing to a sand table. 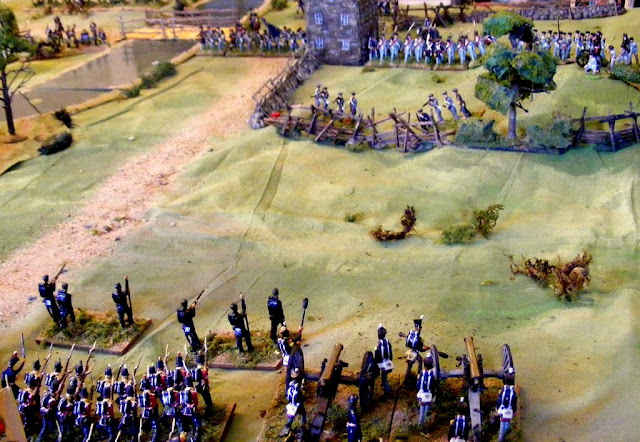 OTHER WRINKLES AND OBSERVATIONS. When laying out some troops, I included the San Carlos Volunteers who are still singly based. Being unable to resist, I plopped them onto a sabot and tried pushing them. The canvas is stiff enough and slippery enough that they slid easily along, something not feasible on either my sand in paint finish on my base table top or on my old soft cloth. Luckily the single figure on sabot vs multi-figure stands debate is OVER. ok?

Wrinkles and creases are a little bit of a problem though. Not so bad with 40mm figures where they are knee high at worst but with 1/72nd a few are chest high. They might come out over time, or be susceptible to stretching, maybe.  I'm not sure when I last used an iron to press fabric. It may have been while I was still in her Majesty's service but its possible that there may be one somewhere in the back of some cupboard but that's an experiment that'll probably have to wait until I get a round Tuit.