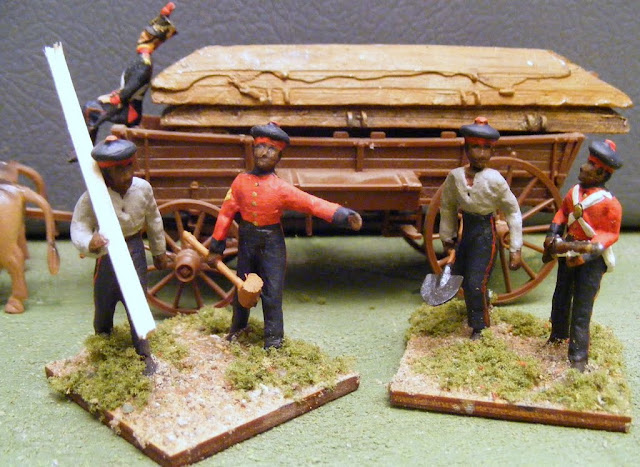 Sappers from a  "Coloured" Company prepare to start in on a pontoon bridge.

The push to get ready for Huzzah continues. I'm not aware that a "Coloured" company of sappers was available for service in New Brunswick in 1839, if anything, volunteer sappers would probably have been raised from  local lumber jacks and boatsmen. However independent companies of African-Canadian volunteers both artificers (sappers) and infantry played a role in both 1812 and during the late 1830's along the US border and I wanted to represent them. The African-Canadian artificers had been praised for their skill in 1812 (while being cheated on their discharge rewards)  so I decided to base my pioneers on them while dressing my unit in 1830's style.

The figures are all conversions of original figures,  the sapper on the left (their left, your right) with musket and white belts is my standard 1830/40 infantry in shell jacket used for US troops and British Artillery in Havelock amongst other things, the corporal with maul is the shell jacket version of my pointing officer while the 2 figures in shirt sleeves are converted from my pirate figure. After some dithering, I decided that since my rules have ended up penalizing 1 stand units unduly, I would make it a 2 stand unit but since it would have been a small unit, I placed only 2 figures per base. With 2 dice per turn of construction power and the ability to take a hit without being shaken, these brave volunteers should have that bridge across the river in no time.

Jack is up next. Just as soon as Make and Mend is done.
Posted by Ross Mac rmacfa@gmail.com

Email ThisBlogThis!Share to TwitterShare to FacebookShare to Pinterest
Labels: 1812, 19thC