Last year, after finding myself in a game of Hordes of the Things, I dug out a handful of old fantasy figures, animals and left behind ancient and medieval figures and assembled some proto-fantasy armies for HotT.
A short time later I was surprised and pleased to receive a package from Tim of Megablitz fame. He had been sorting through the collection of his late friend  John G Robertson. and finding homes for them at the request of  John's widow, and came across these figures which fit right in with my new project.  They look like old Minifigs to me but my newest Minifig catalogue is from White Plains in 1974 and the only fantasy figures in it are the initial Middle Earth range.  In any event, they will fight again!

Thank you John! And thank you Tim. 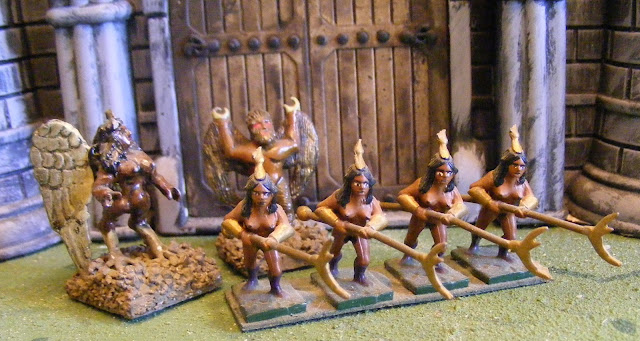 The idea is to incorporate a few fantasy figures that I have into Hexed Basic Impetus with the minimum of disruption. For that reason existing rules are used as much as possible even if some flavour is lost. I have not bothered to add rules for troops that I don't envisage using. Inspiration has been drawn primarily from RE Howard's and Tolkien's works and some old rule sets that dealt with them but with a dose of Hordes of the Things.

Magicians.  A magician stand may be a powerful sorcerer/warlock/witch etc or a circle of lesser ones. A powerful Magician is always the real commander of an army even if there is a figurehead General or King. He may not attach to any unit. Minor magicians or circles may work in support of an ordinary commander but only one magician is allowed in any army.  A magician moves 3 hexes, has a VBU of 1, 0 Impetus and is VD3. He follows all of the movement rules for Skirmishers and is considered to be a skirmish target. A really great magician commander may be VBU 2.
Monsters, Demons, Great Beasts and other Behemoths. Any large creatures, magical or not, including Trolls etc count as elephants for all rules purposes.

Flying creatures. Flying creatures count as light cavalry (CL) for all purposes but may pass over any unit or terrain of either side as long as they can land in an empty hex. They count as mounted if fighting in woods. Dragons are another story and an army unto themselves. As such they are not covered.
Most are  VBU 2 Impetus 1 VD 2.

4. Huminoids and smaller beasts. (ie Orcs, Dwarves, Elves, etc) These are treated as equivalent Human troops. Hordes of ineffective infantry should have a low VBU, low impetus, a VD of 1 and be formed into large units.

5. Special Characters, heroes, assasins, lurkers, sneakers and the like. Hero types should be treated as Generals including the unattached General rule from Hexed Basic Impetus. The rest I leave to scenario/army specific rules or later additions. For example a particular magic sword used by a hero attached to a  unit may be worth an extra die in melee vs some troop types or a magic shield might provide cover.
Posted by Ross Mac rmacfa@gmail.com

Email ThisBlogThis!Share to TwitterShare to FacebookShare to Pinterest
Labels: fantasy