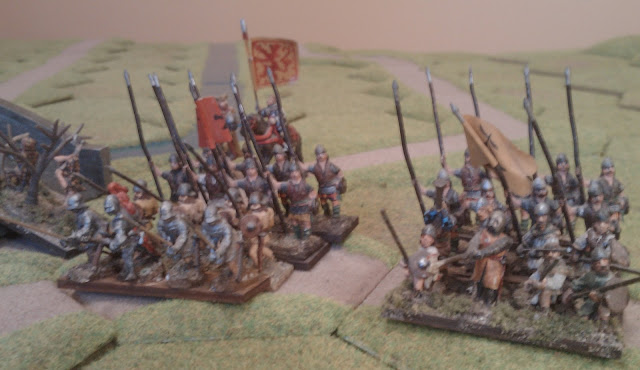 Today saw the Return of the Scots after a 15 year hiatus.  Ron Porter and I have been playing a Hex adaption of Basic Impetus (see my Gathering of Hosts blog ).  Having reached the end of a mini-campaign we decided to dig out a different set of armies for a change. There were some epic Armati Scots vs English games in the mid-90's but they hadn't seen the table since 1997. Thus seemed like a good time to fix that. (Dating from 1976, My Scots aren't my oldest figures but they are my oldest army, the first one where I actually managed 200 figures that actually fit together!  By 1997, I had enough to field opposing Scots Armati armies.  Last summer I  started integrating some of the Scots into some Hordes of the Things armies, now I'm thinking about a fantasy Hexed Basic Impetus adaptation, more on that later.)

The scenario was Two Sides of a River from CS Grant's Programmed Wargame Scenarios. Our first efforts at adapting Basic Impetus to hexes bent over backwards to stay as close as possible to the original game but gradually we have moved towards making the best and easiest use of the hexes and worrying less about being exactly the same. For those familiar with Basic Impetus, we have settled on 1 hex=2.5U (where U=a measurement of length, normally 2 cm for 25mm troops) for ranges and movement. Units face a hex corner and can move into either front hex. Wheels have been replaced by a   rotation of 1 hex corner. Movement rates, rounded down work out to 2 hexes for heavy infantry, 3 for light infantry and heavy cavalry and 4 for light or medium cavalry. Bow ranges are 4 for close range and 8 for long. Each unit has a 2 hex ZOC and a charge is a move adjacent to an enemy. Since we like playing Grant scenarios, we have used the army lists as a basis for what stats troops should have but use the Grant lists for numbers of units. For example, for my Scots, scenario  HC/MC equate to Nobles, usually fighting on foot as elite pikemen, LC can be moss troopers or replaced by skirmishers, INF are pikemen or highlanders, LI are archers and artillery can be replaced by what ever unit type we wish. As it happens I did deploy 1 bombard today when defending but otherwise added extra archers.

We had been playing with 1 hex=5U which better matches the ratio between moves and base widths of the original game but which made a lot of things difficult, such as distinguishing units which were within javelin range from those in contact and which made TT Teasers very lengthy to play  as it could take 20 turns just to cross the table. Today we played with the extended differences and it turned a good game into a Great one. (It also allowed us to fit 2 games into an afternoon.)

The scenario sees a force tasked with preventing the enemy from moving down a valley split by a river. The defenders don't know on which side of the river the enemy will appear so must split their force. The slightly larger attacking force draws up an order of march then rolls to see how close they get before the morning mists lifts to expose their position. On the first game, my Scots were defending and Ron's English attacking. He chose to come on the side where the river curved away giving the widest possible front for his archers. 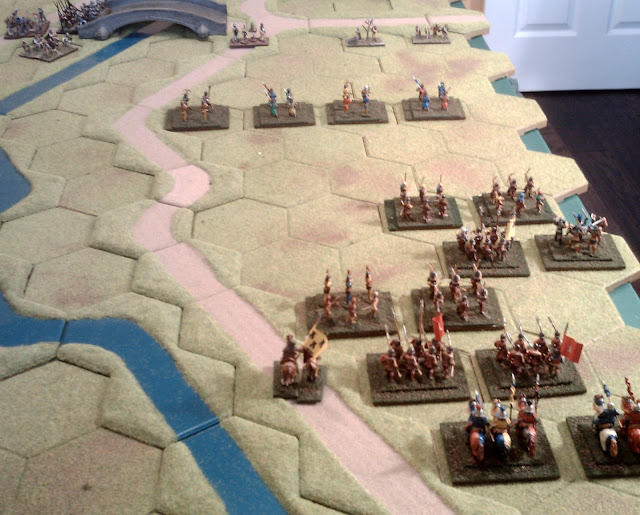 Ron's English in the foreground. A mix of Ral Partha and Revenge figures.

My bold skirmishing archers held up Ron's advance long enough for me to bring all of my spearmen and highlanders over the bridge and form up. The range on the cannon was startling after months of having bows only effective at 2 hexes. The effect was not quite so startling but eventually the gunners blew all the dust out of the bombard and I managed a 6 to hit a unit and Ron obliged by rolling a 6 on his Cohesion test which removed a unit of mercenary crossbows. 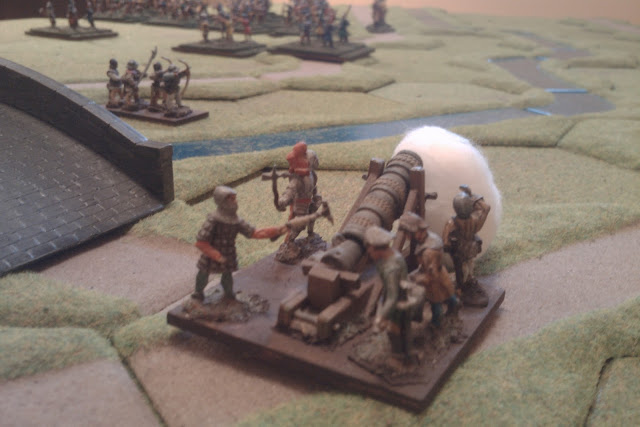 An old Hinchliffe bombard. (or was it Heritage?)

Eventually my skirmish line was stripped away and my Scots faced with the age old choice, stand still and be shot to pieces or attack.  Attack it was. I didn't have enough troops to fill the gap between river and impassible hills  (aka table edge) so the best I could do was stay bunched against the table edge hoping that the bombard firing across the river would guard that flank and pray for good melee and especially cohesion test dice. 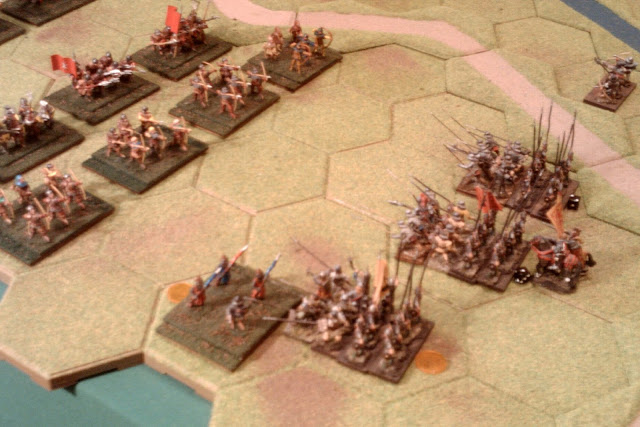 The Scots roll forward missing no opportunity to fail a cohesion test.

Luckily the way the rules handle pike units means that even unlucky Scots schiltrons can suck up a fair amount of damage from arrows. The Highlanders  are a different matter and a brave attempt to dash across the killing zone, cleverly win the initiative and smash into the archers before they could fire a shot went astray when I lost the initiative roll.  Before long,it was clear that it was going to be one of those dice days. On Cohesion (or morale) tests a 6 always fails and a 1 always passes. In combat 6's and pairs of 5 hit. By the end of the 2nd game I was grateful when a roll of 10 dice resulted in 1 hit rather than none and was getting used to seeing the missing combat 6's show up whenever my best units checked morale. Apparently iffy dice doesn't make up  for a questionable plan.

I did drive in his lead units but Ron's army was still very intact as the last handful of nobles from my center schiltron staggered forward to die in melee with the English billmen, bringing my army to its break point.  The game was closer than it looked though by the final score though. A slip at the wrong time might easily have resulted in the English infantry being driven back through their mounted knights and off the table. It was  in sum an exciting, gripping game. It was also over in time for us to change sides. 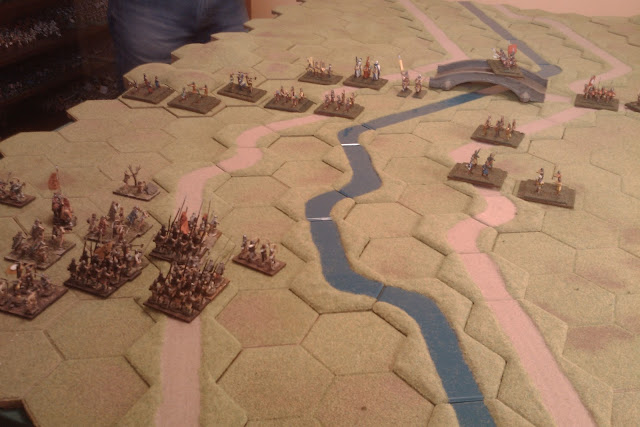 The Scots head for the hills.

As I put away the bombard and pulled troops including some light cavalry for my slightly larger attacking force, I decided that my best bet was to go for the narrow side of the table to force Ron to face me with a minimal number of archers and to limit his ability to send heavy cavalry around my flank. To protect the spearmen from archers firing across the river, I would deploy a skirmish screen of my own archers. There was a series of hills on the table edge and I aimed the highlanders for the hills and followed up with the pikes.

As the game opened, I made some gaffs with the skirmish screen which gave Ron the chance to shoot up one  schiltron. The resulting cohesion test made it clear that the dice hadn't turned, the 5th morale 6 in a row. My melee dice hadn't turned either. After about 4 turns my army was 2 units away from breaking with 3 units having only 1 hit left. It had been fun but looked pretty hopeless. I figured 1 more turn.

But you can't trust dice. 5 turns later, after some good cohesion tests, some good melee rolls and some timely turns of initiative, I still hadn't lost those 2 units, Ron was rapidly approaching his break point, and I had broken through his line along the hills. The loss of his General and only unit of knights sealed the deal but the Fat Lady only sings at the end of a turn, not the middle and Ron had 1 last chance to make it a draw. All it would take was to land one arrow on 1 of 3 disordered units with 1 hit point left, no cohesion test needed so none to save me, or have his flank attack on one of my disordered pike units work. But sometimes you just run out of 6's. Whew!  A squeaker of a victory beats a draw or a defeat any day!

And yes, if the game had been less intensive and exciting, I might have remembered to take pictures.