A Not Quite Face To Face Wargame 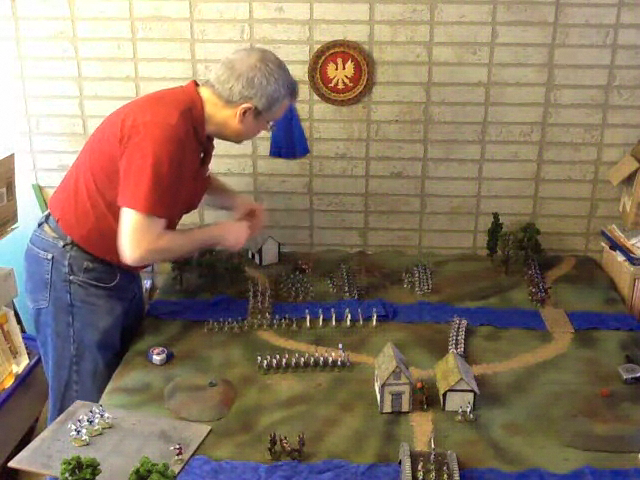 About 1/3 of the way through the game I remembered the snapshot feature. Here Rob moves North Polenburg reinforcements on to the table.

Today I got my chance to be the remote player in a Skype game.  The game this time was set in the Not Quite the Seven Years War (NQSYW) using Charge! and 40mm homecast Prince August figures. Representing the Northern Alliance, I took command of a force of North Polenburg troops while the Pragmatic Alliance forces were commanded by Norman & William Dean with Rob serving as GM. The scenario was #20 from Stuart Asquith & CS Grant's Scenarios for All Ages.

Now for those not steeped in the history of the NQSYW, the armies of North Polemburg had a hard earned reputation for snatching defeat from the jaws of victory. When Rosmark allied to North Polemburg and the armies of the Northern Alliance took the field, there was a drastic change of fortune with victory following victory. Military historians have debated for years now whether improved fortunes were due to the skill of the Rosmark generals or whether it was the fighting power of their troops. Since this battle saw a Rosmark general commanding a  force which did not contain any Rosmark units, it might be said to answer that question.

Briefly the scenario presents an advance force of Pragmatic troops finding what appears to be a poorly guarded river crossing. Both sides  call up reinforcements as the defender struggles to deny the enemy control over bridges spanning both rivers. The initial Northern forces consisted of a company of the Hawks Infantry Regiment which quickly barricaded itself into a small village while sending for help.

There are two main ways to get an enemy out of a village in Charge!. If you're in a hurry, you can fix bayonets and charge, hoping to survive defending musketry, break in to the buildings and expel the defenders in melee. If you set it up well and get lucky, you can do it in one turn. I've never seen it done but theoretically its possible. Usually several charges and much milling about is required and even then its not guaranteed. The other method is to deploy maximum firepower and blast the defenders out. This takes longer but is more sure.

Since there was a regiment of Wachovian infantry leading the Pragmatic forces, it was no great surprise to see them fix bayonets and rush forward in column. A fierce and prolonged fight ensued with the Wachovians eventually breaking into one building but being evicted. At this point, the Wiegenburgers had arrived, deployed into line like proper 18thC professionals and began decimating the Northern ranks. Eventually, the weakened remnants of the defenders could not keep the Wachovians at bay and these stormed in slaughtering the defenders. Only 2 figures of 19 escaped to run across the plain to where their reinforcements were rushing to their aid.

The Wachovian Hussars were now on hand and charged the Northern reinforcements only to be met by North Polemburg Dragoons on their splendid white horses. Normally heavy cavalry are considered to have a considerable advantage over lights but the Wachovian Hussars learned their trade in many a fierce fight with Rosmark's famed Yellow Hussars so it was no surprise when they mauled the Dragoons before being driven back. The first screen snapshot (above) was made as the two sides rallied back. 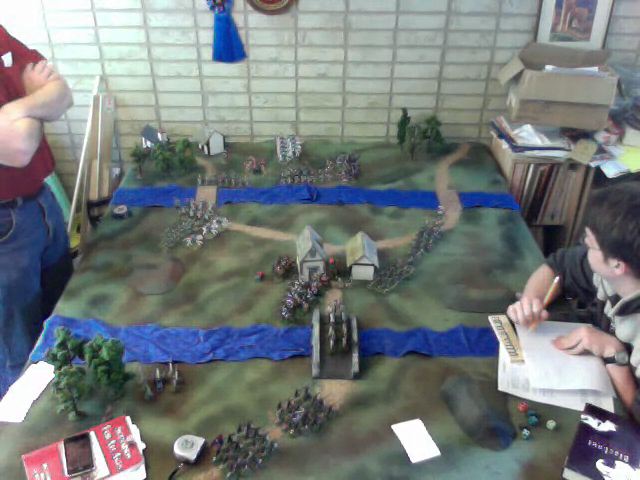 More reinforcements pour on to the table from both ends. A need to recharge led to a switch from Rob's Ipad to a laptop with the resulting fog of war.

As both sides poured in troops, the Northern infantry and artillery tore apart the Wiegenburger. The North Polemburg Dragoons cunningly rode around behind their infantry and hit the white coated Wiegenburgers just before they were forced to retreat. A general,experienced in warfare, should perhaps have kept in mind the  defensive nature of the battle, fore saw the imminent demise of the Whitecoats and kept his dragoons in hand to face the coming storm of Whitecoated cavalry. But steady defensive has never been a strong suit of Rosmark generals and so the Dragoons were thrown in. They rode down the infantry and were then met by the now rallied Hussars. Caught while rallying themselves, the two bodies of cavalry destroyed each other, the two survivors saluting each other as they rode away. The Pragmatic cavalry now had a clear field and swept away the remnants of the original North Polemburg regiment. The Northern forces had rushed their Grenadiers forward across the bridge but these now fell back across the river and the fighting on this side of the field died down to the occasional artillery round.

Across the field, the 2nd Squadron of Wachovian Hussars had crossed the Southern Bridge and charged the Queen Jennifer Regiment. Steady shooting and some stout bayonet work resulted in a drawn melee. As the Hussars fell back, another Pragmatic infantry regiment was at hand as was the 2nd Northen Polemenburg Dragoons. These charged forward against both the rallying hussars and the infantry.  The idea had been to take advantage of the weakness of the rallying light cavalry to destroy it as well as throwing the infantry back. Unfortunately, despite their penalty in melee, the Hussars managed to win 1st move and pinned all of the Dragoons who were in a narrow defile between wood and their infantry. The Hussars were wiped out but their sacrifice had bought time for the infantry to cross over and deploy.

As the sun began to sink, a fierce firefight saw the Queen Jennifer Regiment, supported by a gun and the opposing Scoeffen-Busch-Hagen Regiment,  decimate each other (Through the smoke, I wasn't able to make out which blue coated regiment  it was). As the next Pragmatic unit began across the bridge, the Dragoons advanced to the charge, assured that they could pin them in place until sunset and then rout them back across the bridge. 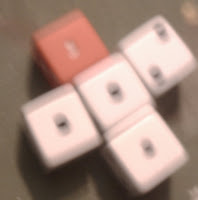 Dice are fickle things and its a foolish commander who puts his trust in them.

Normally a melee where 6 cavalry fight 6 infantry is as close to a sure bet as it gets in Charge! but even doubled a 1 is not a formidable roll. Four one's and a two was even less impressive. The cavalry was able to force the 2nd round of melee but fared almost as poorly and were driven back in ignomony leaving the enemy in firm control of a route across both bridges.

It seems that as bravely as North Polemburg troops fight, it takes more than a Rosmark general to lead them to victory. Of course, note should be taken that it was not a Schoeffen Busch-Hagen General in command of the Pragmatic forces so perhaps the debate is not settled after all! 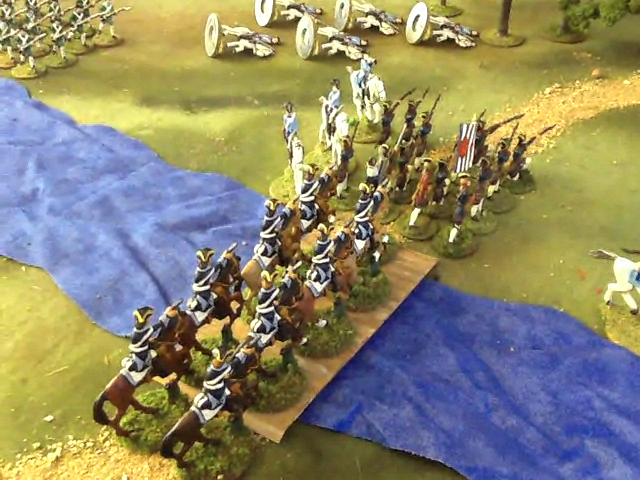 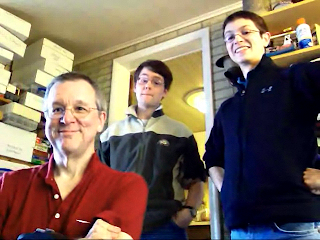 Rob (in red) with Norman and William looking rather like cats with cream on their whiskers.
Posted by Ross Mac rmacfa@gmail.com