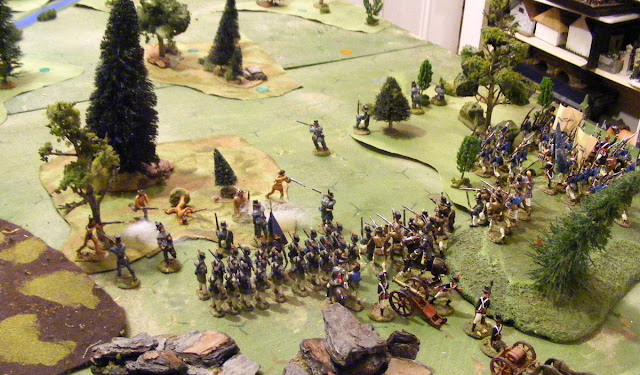 "I ain't scared of no Injuns. Much."
The Yellow chits mark possible swamp areas, the Red one smark possible British or Indian units.

Earlier this week I snuck in an 1812 solo test game, a turn or 2 at a time in between other things. This time it was the "If you go down to the woods today" teaser from the Battlegames Teaser Volume #1 .

The slightly revised Rally/Morale Test is finally giving just the sorts of morale test results I've been tinkering towards for decades through 3 sets of rules. Needless to say it probably works best because its the simplest one of them all. I have accepted a greater degree of risk and finality than in the past but have also let go of numerous situational/troop modifiers.

However, having once again brought back a  "25% hits from shooting causes disorder" rule, it started giving me grief, again. The idea of this rule has always been to allow for some thing more than attrition as a result of shooting with the intent that it should be fairly rare unless the target has been weakened unless using modern weapons or being at very close range. In ideal circumstances this is what happens but there are serious loopholes. One is that small units, especially small units of skirmishers, are always at risk which was not the intent. Another is that since the current shooting rules do not allow most units to inflict more than 25%, a unit even 1 figure stronger is safe from the effect which bothers me.  I came every close to chucking the whole thing and going mad again but luckily calmer heads eventually prevailed. 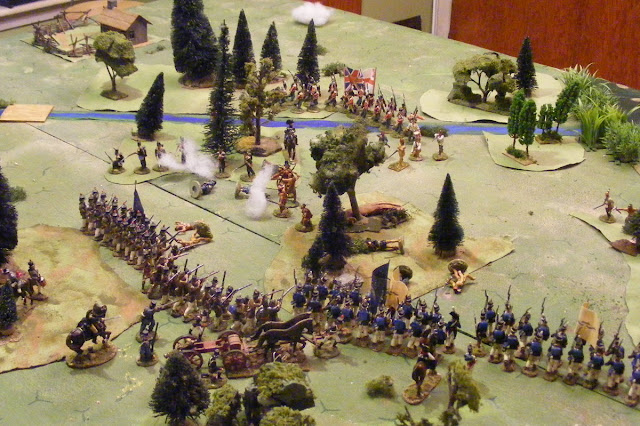 Its starting to look for scary for the Brits as the various 1/2 units of Indians get chased out of wood after wood.


Chucking the disorder rule was close until I remembered that I wanted it to allow for extension into the 1870's. After looking at various ways to increase close range and decrease long range firepower, I finally decided that the 2 hits on a 6 rule that I had been playing with was the easiest, most effective way to solve it without major shake ups. It doesn't answer all the anomalies but I can live with the ones it doesn't. While I was doing it I went back to my old, tried and true fire chart since the new one was more than I could keep in my head, one of my design goals.

As long as I was tinkering, the move or shoot wasn't really working for me either so I scrapped it again, this time in favour of fire after movement only. I also brought back reaction fire vs enemy movement (I suspect it was dropped by accident as I've always liked it and never had problems) rather than just to return enemy fire and have made all fire and consequences sequential rather then simultaneous so that there will not be any instances of 2 regular units routing each other with fire, something I have no precedence for.

Counting noses for Brigade morale hasn't been working too well for me, mostly because I am lazy with a decreasing short term memory rather than anything game wise. Given the small number of units I tend to play with, I've decided to bump any brigade morale to the optional rule section and instead just go with the good old units losing 50% become shaken and an army with 50% shaken or lost units must concede. Based on calculation crossed with past experience, the over all effect should be about the same but be easier to administer in the heat of action. For example in this game, the 1st Ohio would not have been shaken by the rout of the 3rd Ohio and the skirmishers, but the badly shot up 1/2 units of riflemen would not have been pushed so boldly forward to fight to the last man so the two would have balanced and the game would have ended at just the same point 2 turns later when the 4th US infantry was driven in. 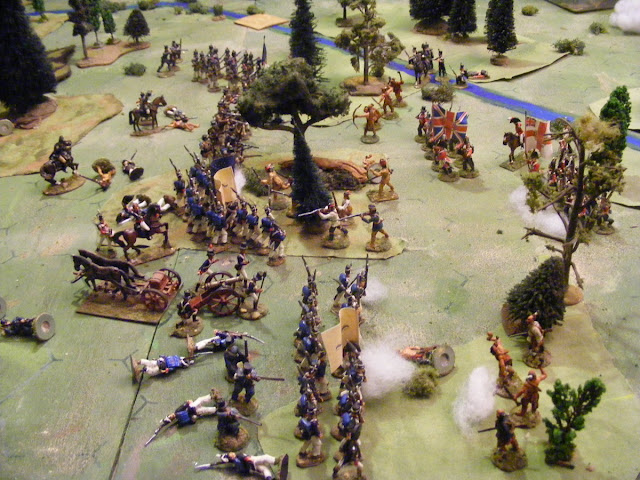 Tecumseh rallies the Braves and Gen, Ross rallies the Canadian light infantry and sends them around the flank against the American militia.


The return to these mechanisms shouldn't have a major effect, looking at the game just played, the Indians were able to use the ambush rule to do just what the ordinary reaction rule allows, and the units were so small that even the occasional double hit would not have allowed 5 skirmishers to rout a 20 man battalion while the skirmishers were already at risk once they had taken a  hit or if facing 2 dice f fire and still will be. The shoot after moving might have moved the game ahead slightly faster and been a bit more exciting but I don't think it would have changed any outcomes.

It felt odd at first, not having to pass an order check but the result actually felt more historically plausible to me and as predicted, changes of initiative combined with terrain and troop density, not to mention player choices, provided plenty of friction.  OH yes, having played about 12 turns, I only managed 1 tied initiative meaning only 1 Chance Card. One which brought 2 Indians back to the ranks, a welcome reinforcement. More than 1 would have been welcome but I usually see more initiative ties than that so I will keep with that as it is an easily remembered trigger. The only alternative I could see me using would be to make a deck with 3/4 "No Event" cards so that one could be pulled every turn. 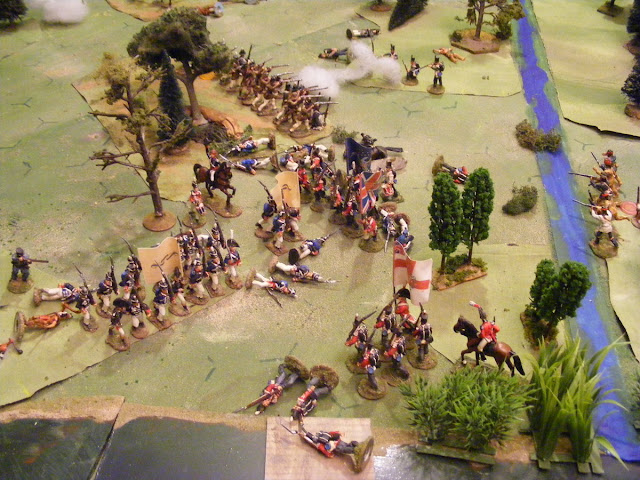 The American Militia gives way and many of them panic. Shortly  after the regulars confront each other and a wing of the British 49th Foot routs the US 4th Infantry with the bayonet, bringing the battle to an end.  A close run affair.

The revised rules are uploaded and the 5 game without modification counter has been reset.

Email ThisBlogThis!Share to TwitterShare to FacebookShare to Pinterest
Labels: 1812, HofT