More Boering Thoughts and other things

Having just re-read Marquis' Canada's Sons on Kopje and Veldt, which covers the experiences of the Canadian contingents sent to the Boer war, that war has been on my mind again. The book focuses on the Royal Canadian Regiment from recruiting to its arrival back home but also touches on the Canadian Mounted Rifles, Strathcona Horse and the 3 batteries of artillery. Unfortunately for me, from 2 angles, it focuses on the main actions from Paardeberg to the fall of Pretoria, only touching on the guerrilla war which the artillery and mounted troops were so active in. Unfortunate because it has drawn my attention back to the formal stages of the war with thousands of British atacking on a 30 mile front and unfortunate because it provides so little additional detail and examples of the smaller, more intimate actions of the guerrilla war. I have, however, been doing enough poking and prodding at this to decide that well I may be able to do some satisfactory 40mm Toy Soldier games inspired by the Riel Rebellion and "First" Boer War, the Second War is going to have to be a 20mm/1/72nd project and probably a very abstract one. Jacklex & Hat ought to be able to provide pretty much everything I need including ox wagons, 15 pdrs and 4.7" guns without shields. So hopefully they will both still be around next year when I get back to this. 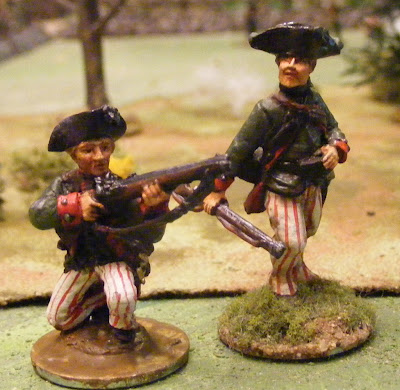 One figure painted. Better than none and now the Hessians have a full 8 man unit of Jaegers. He's built a bit more like a grenadier than a light infantryman but he fits well enough and I figured the size difference would show less with a kneeling figure.

I think the AWI game is about to get another outing, this time with most units fielded as 20 line infantry as originally envisaged. Its not that there was anything wrong with the larger number of smaller units  but I'm not sure the added fuss really added anything but fuss. When I consider that my plan is to play mostly teasers and teaser type games, which often call for only a handful of units, there seems little point in designing rules that call for a lot of little units and then making translations. Yes, this is not the first time I have come to this conclusion, but I seem to keep forgetting.

A few of the ACW lads have been out too, playing with ranges and regimental sizes   (and scales -sshhhhh). Partly this is because I have also been reading Sherman's memoirs off and on as well as dipping into Battles & Leaders. All of which leads me back to thoughts of the standard game with larger Regiments as units (as in 4 or 5 stands vs 3)  which can double up as Brigade Units when playing using the CM scale. Given my 40mm wide bases, that would put my cm scale brigades  in the same ball park as Fire & Fury.

While pondering these issues, I suddenly remembered a  possible solution to my close range/long range quandry when the bands were so narrow and the dilemma of having 1/2 a unit's fire zone either too deadly or completely useless.. In essence it involves 3 range bands instead of 2 with muskets having a 0" close range (ie in contact only) which nicely gives infantry a reason to hold fire, and most other units have a close range of 6" at which they currently get a +1. The medium range band is the same as the existing single range band. The long range fire can only hit close order targets and only on a 6. Since it robs troops of the right to move or to shoot later at a closer range, it probably won't be over used. That leaves the existing range bands and scores as is but replaces a die modifier which needs to be remembered by a range band. so cleans up that process a little too.

Thinking about game balance and troop type differentiation (as in rock vs paper vs scissors) and simplicity and game flow, I have relented and allowed skirmishers to move and fire and have slowed down field and siege artillery to give light guns a raison d'etre, and removed some lingering anal-ity from the artillery movement rules. It also got me fussing again over what size cavalry to use for game balance if I did use the 20 man line units. The 8 man ones currently seem too weak but 12 are too bulky in 40mm.

Lastly, I have been thinking again about desirable "game" attributes, one of which is excitement. In terms of the Memoir game this comes partly from 3 things, not knowing what your opponent will do next, (got that), uncertainty that you will be able to move the units you want (got that albeit in different format) and the uncertain nature of combat. I have that to some degree but not quite as much so I have been testing various situations to make sure that  some things, like a cavalry charge should be exciting with a chance of glorious victory, ignominious defeat or a waffle. It was almost there but I have gone back to try something I tried before and chickened out on because it was hard to predict the rare extremes. I've become convinced that as long as those extremes are rare, their existence is not a bad thing as they can get the adrenalin pumping. Oddly it has also meant replacing die modifiers with something simple. 1 die per charging cavalryman vs a +1. This means lower chance to hit but a higher possible number of hits. It also means 8 or 9 man cavalry units are  good match for a 20 man infantry unit. I love it when things start to mesh and flow.