This may not be obvious :)  but I'm not always big on following popular trends or doing things in "the usual" way. So it was with a feeling somewhat like what I would feel if I ever caught myself humming a pop tune that two weeks ago,  after a series of discussions about WWII miniature rules and hexes,  I found myself mentioning to Ron that some people liked using Memoir 44 with real miniatures.  He hadn't heard of it. Which is how I came to find myself taking this picture on Friday afternoon. 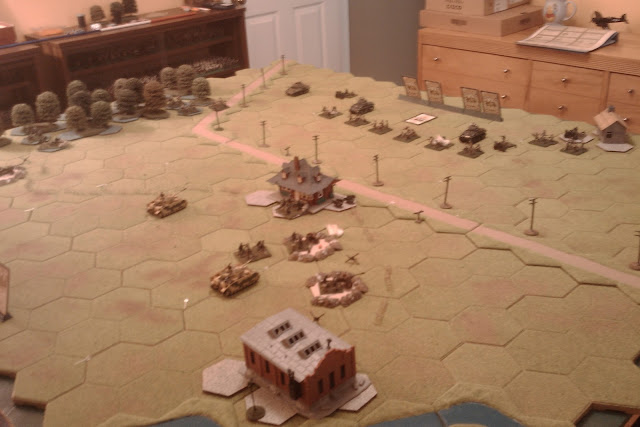 .
Now, just to be clear, honest and above board, let me lay out out some of the issues that I had with the game before ever playing it, based on what I had read about or seen of the game and its off shoots. I am pleased to say that none of these opinions have changed despite having had   a very enjoyable game and anticipating playing more.

2) Its gimmicky in the sense that one needs certain player aids, devices or gimmicks to play the game as written. These have to be purchased from the retailer or else jury rigged using the information which they freely distribute. This is the odd thing, the intellectual property is being given away free,  its the cheap toys, printed material and pre-made gimmicks that are being sold. To an OS wargamer brought up in an era when you bought rules and painted up your own troops and scenery, this is basically backwards even though I thoroughly approve of the free interchange of ideas and thus approve fully of them sharing the rules etc.

3)   Its gimmicky in the sense that artificial zones and cards are used to control planning, player options and the action. Now intellectually, I get it that the end result may work and its not really any different than an activation roll or some other form of friction  and the cards don't prevent you from making any battle plan you want, its just better if you plan for the mix of cards in the deck and the likelihood of drawing this or that one and what they allow you to do and these thoughts are NOT the same thoughts that a commander would have. Neither are the thoughts involved in managing PIPS and the like but that is a poor defence. The 3 zones sits well with my old translation of Vegetius' "de re miltaire" but again, I'd rather analyse the field of battle and devise my own.

4) Its popular. Ok I said that, well then, its not only popular but commits the greater sin of being popular and appears to work as a warGame!

OK so that said, how'd the game go? 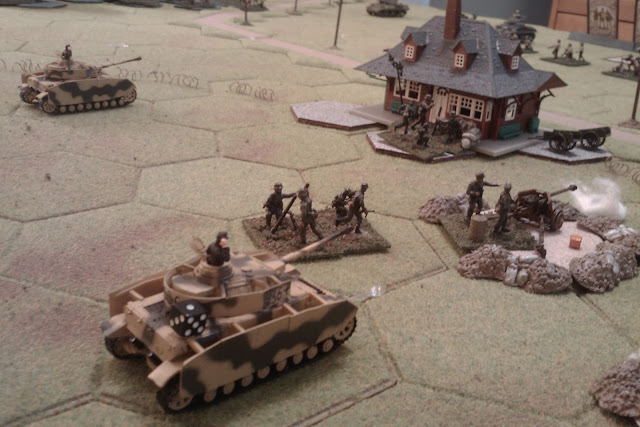 About 1/2 way into the game, the American infantry finally screws up the courage to walk across the "Dead Line" and  into German artillery range. The guns open up.

Since the goal is to play TT Teasers, after a week of on line solo gaming, Ron & I agreed to play a Grant scenario as out 1st game rather than starting with any of the ones that come in the box. Ron tends to be thorough and analytic about these sorts of things so I left him to it. Since we were going to use his 20mm toys, we decided to use the rules from Winter War so we could have mortars, machine guns and the TD. He chose Scenario 1 from Scenarios for Wargames and set it up on his table which is 18x18 Hexon hexes. Not the right shape but we decided to work with it. Translating the Victory conditions was a puzzler, the scenario says that the side holding 2 out of 3 terrain objectives is the winner (the 2 towns plus the redoubt behind the wood) but in practice breaking the enemy army is often key. In the end, we decided that the American would be granted medals for capturing victory hexes in addition to destroying units and needed 6 to win but we left it open to discussion at the end based on what we felt the situation was. The scenario forces were processed into :

Defender (German):
3 field bunkers each with a basic artillery unit (75mm PAK for the Germans, 105 Howitzers for the US based on what came in the FoV boxes)
2 Tanks (PZIV)
8 Infantry stands, 2 with MG, 2 with Mortar.   (Mostly Valiant painted by yours truly)

Attacker (Americans)
Dozen's of guns and tanks and 100's of Infantry stands. Well OK, maybe that's just what it felt like, maybe it was only 3 guns, 2 Shermans, a Tank Destroyer and 12 infantry inc MG's and Mortars (again Valiant that I painted for him). 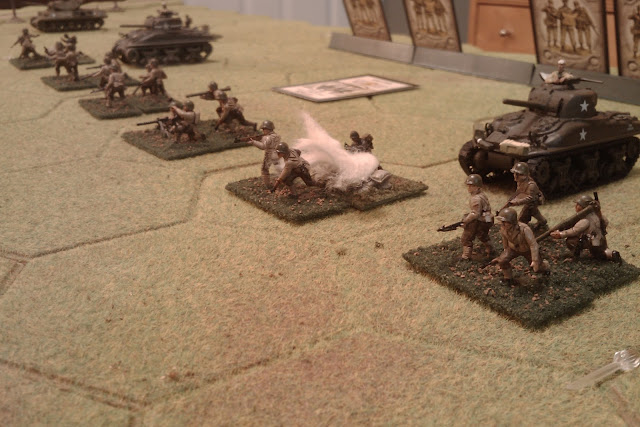 And the  first shot by the German artillery, registers a hit.

One of the challenges to this scenario is that, regardless of rules or period,  the defender just doesn't have enough troops. After thinking about it (and having 1 solo Pegasus bridge on-line game under my belt) I occupied the station with an MG, mortar and infantry, left 1 sole infantry in the main town by the river, dug in an MG on the edge of the woods and held the remaining 3 infantry and mortar in reserve, 2 of them on zone dividing hexes so they could go either way. The Tanks were placed in similar reserve positions. If I had understood the mortar rule better, I would have place one if not both of the mortars in or near the wood.

Ron put token forces on his left, sent a forces against the wood and massed the bulk of his forces in the center massed for an assault and waited for the right card. Unfortunately for him, they were all at the bottom of the deck or in my hand where I had less need for them. After bombing the town and laying down an artillery barrage,  thus reminding me of the dangers of bunching up in modern warfare and of the need for avenues of retreat, he eventually gave up and started working his way slowly through the woods.

This is a good scenario for a defender who knows how to be patient, bide his time and then launch a devastating counter attack when the time is right. With no enemy units in range, I  burned through some so -so cards trying not to waste all the good ones that seemed to be accumulating. Eventually my inner berserker could  not be denied any longer. I sent my infantry up through the woods to see what they could do. Moments later a series of attacks and counter attacks rippled through the woods, spilling out into the plain. I fed in some replacements and Ron pulled back a bit. 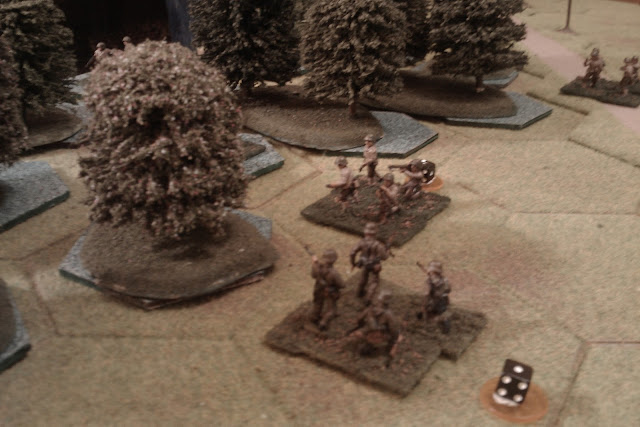 In the center, Ron finally decided that he wasn't going to be able to launch a co-ordinated assault which would allow him to over whelm me without taking casualties and began inching units forward and bringing his artillery into range. I shifted my tanks, waited and then pounced!  Minutes later a Tank Destroyer was burning and the Sherman was back peddling furiously. The 105 blasted away at point blank range and the wily Sherman swung around behind me and got a final hit before I could respond. It had been close but my armoured counter attack had been held. 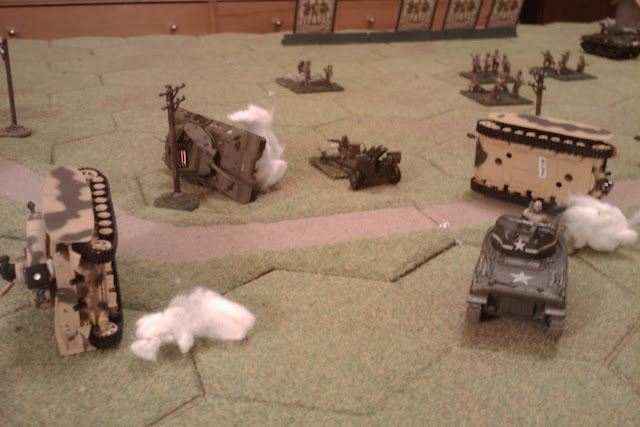 In the center, the American infantry finally closed in. The first close assault on the town was ambushed by a machine gun and cut apart but just as the next one went in, my machine gun jammed (that is I had no cards that would allow it to fire). The Americans poured on the fire again then entered the front of the station, adjacent to the victory hex held by 1 wounded infantry stand. I still held all 3 objective hexes and had 4 victory medallions but Ron had 6 and I was just about out of troops. There was no way I could reasonably hold on so we let  the victory medallions speak and called it a US victory, Now if my armoured attack had managed to take out that Sherman (due to the special card + an armoured break through I had 2 rolls each of 4 dice and got 0 hard hits, just 1 retreat, I'm calling it an umarked gully ) or if my MG could have fired on his badly damaged unit, 1 hex away in the open! The only turn all game where I had no cards that would allow it!    A good close game.


Much as I hate to admit it, having decided not to let the cards dictate my plan, but just allow them to adjust how I implemented it, it was the player tactics crossed by luck and troop handling that made the difference. Since we have been looking for a fast, fun WWII warGame, not a heavy duty serious simulation, it actually fit the bill well. I think I would have been less happy without  some of the later expansion troop types but they point the way to adapting almost any broad weapon group such as light tanks as well as allowing the full gamut of anti-tank guns, heavy artillery etc. After talking briefly about this game,  ancients, hexes, C&C and Tim's blog, I feel a bit like I'm standing on a steep, slippery slope, and then, there's still that other thing.