Back to Dubbiya Dubbiya Two again today and Memoir 44 Winter War. Ron nicely let me have the Yanks again for our play through of Chance Encounter aka: Sawmill Village.  The beginning was eerily familiar. There I was struggling to move my boys up the road, trying to keep my tank/infantry Combat Team together but the tanks got a little ahead. (The scenario says no deployment until enemy is spotted). Suddenly the quiet little French village ahead of us erupted in Panzers and my lead tank platoons were hit hard. Somehow, I'm not sure how, they survived and fought back. 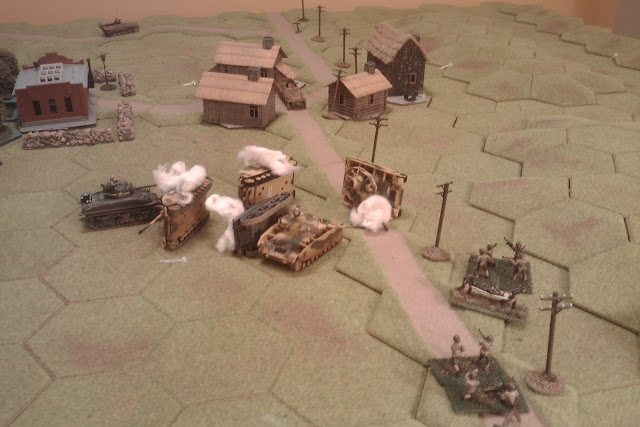 Sgt Star in his Able company Sherman earning the Medal of Honor.

These 3 turns sort of set the pace for the game. Ron's dice were as cold as mine were hot. The Sherman above, despite having 2 hits, managed 5 tank hits on 6 dice, and a couple more the next turn. The other tank and a bazooka team helped finish off the lead tanks and a long shot from a bazooka caught the last as it took out the hero. Ron's men had seized the objective village so the score was 4:3 at this point in my favour. 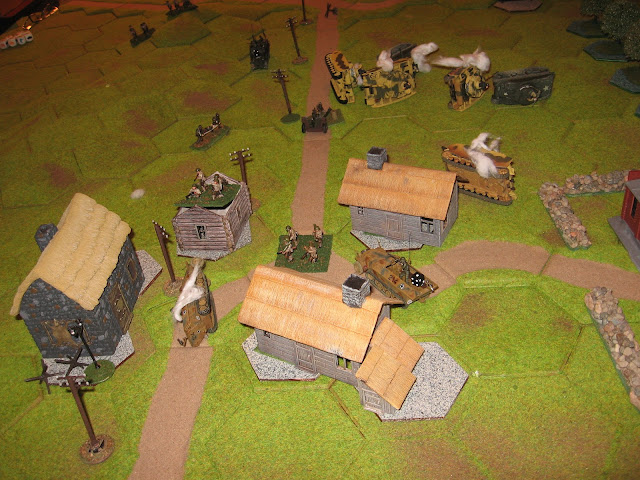 Phase 2 saw the American infantry trying to take the town back from the German Panzer Grenadiers who had seized it. I drove them out of one house but got thrown back by a counter attack. We both resupplied and then with 4 shots, I got 4 hits and followed up with a close assault which took out the 1/2 track, Game over.

It was a good game and felt anything but easy but it didn't seesaw as much as the previous game due to my lucky dice. I figure the boys had their dander up after the last fight.

After a break for lunch, we decided toi check out Ron's shiny new C&C  Ancients. The result was a resounding , "ennh, ok I guess  but not great". We will try again at some point, I suspect we might have a harder time lifting this game out of its context and a prolonged series of head on pitched battles doesn't appeal to either of us.

Email ThisBlogThis!Share to TwitterShare to FacebookShare to Pinterest
Labels: 1/72, memoir